The junior shops, to bow in 600 stores and on jcpenney.com, feature merchandise designed exclusively by the designer. 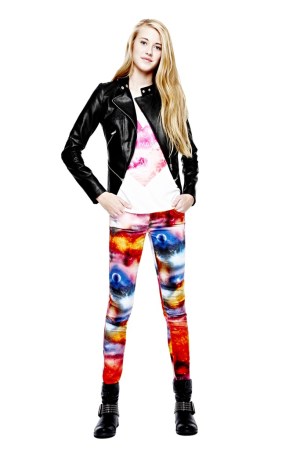 On Friday, J.C. Penney Co. Inc. takes a big step forward in what’s shaping up to be a pivotal spring season.

That’s when Penney’s launches “L’amour Nanette Lepore” junior shops simultaneously in 600 stores and on jcpenney.com featuring merchandise designed exclusively by Nanette Lepore. The shops will be 300 to 500 square feet each.

“It’s a fun, stylish, full line with kind of a quirky edge,” said Siiri Dougherty, Penney’s senior vice president and general merchandise manager of women’s apparel. “L’amour fills a void in the merchandising for older juniors, in the 15- to 20-year-old range.”

Dougherty was part of the crowd at Thursday’s L’amour launch party at the Hudson Hotel in Manhattan, where Lepore and her daughter, Violet, who was an important source of ideas in creating the collection, previewed the line. It’s priced right for the value-minded Penney’s customer — the highest-priced item is the “moto” jacket for $50; the lowest are the $17 heart T-shirts and lace bralets. L’amour also features flirty dresses, denim, silk-screen merchandise and lots of bright, vivid colors, but as Penney’s executives pointed out, everything is priced $50 or under. There will be monthly deliveries, with 12 styles for the launch. Currently, L’amour can be preordered online.

Lepore designs a contemporary collection sold at such luxury stores as Bergdorf Goodman and Saks Fifth Avenue, but her connection to Penney’s runs deep. “From the time I was a kid growing up in Youngstown, Ohio, between the ages of 12 and 15, I spent Saturday afternoons shopping for fabrics at J.C. Penney,” Lepore said, noting that she started sewing garments when she was very young. Lepore is most popular on the East and West Coasts, though she feels her reputation extends to the middle-American Penney’s customer. “They know me, too. This is going to be big.”

The most anticipated addition to Penney’s this spring is Joe Fresh, which in March rolls out inside 683 stores with shop-in-shops from 1,000 to 2,500 square feet each. Also coming this year are shops for Martha Stewart, Jonathan Adler, Michael Graves, Carter’s, Cosmopolitan intimate apparel and Giggle baby clothes.

Penney’s is also seeking the right pricing formula, after losing many customers as a consequence of eliminating coupons and sales and moving to everyday low prices last year. Last Friday, William Ackman, the activist investor and chief executive officer of Pershing Square Capital Management, said on CNBC that Penney’s pricing scheme “looks to be a balance between everyday low pricing and sales and other ways to drive traffic and to give the customer value, which is something the company stands for.” Ackman is a member of Penney’s board and controls about 25 percent of the company’s stock. He also helped install Ron Johnson as Penney’s chairman and ceo.