By David Moin and Antonia Sardone on July 21, 2010
View Slideshow 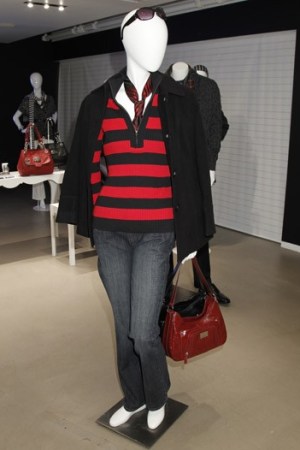 With high expectations for market share and margin growth, J.C. Penney unveiled its exclusive Liz Claiborne collection on Wednesday. It’s an expanded version of its Liz & Co. line, which has been discontinued, but with comparable prices.

This story first appeared in the July 22, 2010 issue of WWD. Subscribe Today.

Penney’s Claiborne collection launches next month in more than 1,100 stores and on jcpenney.com with 30 categories across men’s, women’s, accessories and home, which joins the assortment in January.

The fall collection stays true to the Liz Claiborne image with a versatile sportswear array of novelty knits, nautical striped sweaters, classic denim in a variety of washes as well as outerwear ranging from a country buffalo plaid jacket to a chic fake fur urban version. Accessories run the gamut, including shiny handbags, while jewelry exudes plenty of sparkle and shine.

Penney’s executives said their Claiborne collection takes a “wear-now, polished-casual” approach; emphasizes items suitable for either office hours, after work or running errands with the kids, and is steeped in color and Claiborne’s iconics, such as long cardigans in novelty jacquards and toppers.

Claiborne watches, leather, men’s tailored clothing and dress shirts previously absent from the Penney’s assortment are being introduced with the fall launch. Key items in accessories include midsize handbags with lots of compartments, satchels with topstitching and croc jacquards.

According to Myron “Mike” Ullman, chairman and chief executive officer of J.C. Penney Co. Inc., Liz & Co. represented the chain’s largest exclusive brand, and its volume, which he would not disclose, should double in five years under the new incarnation. Considering it’s a collaborative effort marrying the design team of the Claiborne organization with Penney’s sourcing and marketing capabilities, the retailer’s executives believe there’s an opportunity for a 500 basis-point margin growth from Liz & Co. to Liz Claiborne. Penney’s also is upping the in-store visuals and square footage, as well as marketing spend, and will be advertising its upcoming Liz Claiborne assortment on television, which it didn’t do with Liz & Co.

Penney’s challenge is to convert its Liz & Co. shoppers to Liz Claiborne shoppers, win over consumers from Macy’s and other department stores that previously sold Liz Claiborne and revive the Claiborne brand name. Even though Liz Claiborne had lost momentum at Macy’s and other stores in recent seasons and has been losing money, Penney’s said a recent brand-awareness study indicated customers still wanted to shop Claiborne. Penney’s has a 10-year licensing deal with Liz Claiborne Inc. and the right to buy the entire brand name after five years. Separately, the more fashion-oriented Isaac Mizrahi-designed Liz Claiborne New York line is sold exclusively on QVC.

“We’re getting into some special pieces that we wouldn’t have before,” said Steve Lawrence, executive vice president of men’s, home and kids’, who was among several Penney’s executives at the Liz Claiborne showroom in Manhattan for the unveiling. Penney’s Claiborne men’s collection targets a modern, young consumer ranging in age from 25 to 44 and where Penney’s had been “a little deficient in market share,” Lawrence said. He also said Penney’s will display the Claiborne collection on new mannequins, pedestals, rugs and table programs.

In women’s, Claiborne will be displayed prominently in the traditional-classic department. “We’ve taken what was great in Liz & Co. and also increased the amount of styles and offerings for Liz Claiborne,” with greater attention to regional preferences, said Liz Sweney, executive vice president and senior general merchandise manager of women’s apparel, accessories, handbags, shoes and fine jewelry. She also said there will be one or two new Liz Claiborne sportswear collections a month, and that, with Liz Claiborne, represents a 15 percent increase in square footage on average per store from Liz & Co. To help make room on the selling floors, the store dropped Izod women’s, she said.

Penney’s next exclusive, MNG by Mango, will be unveiled next month.