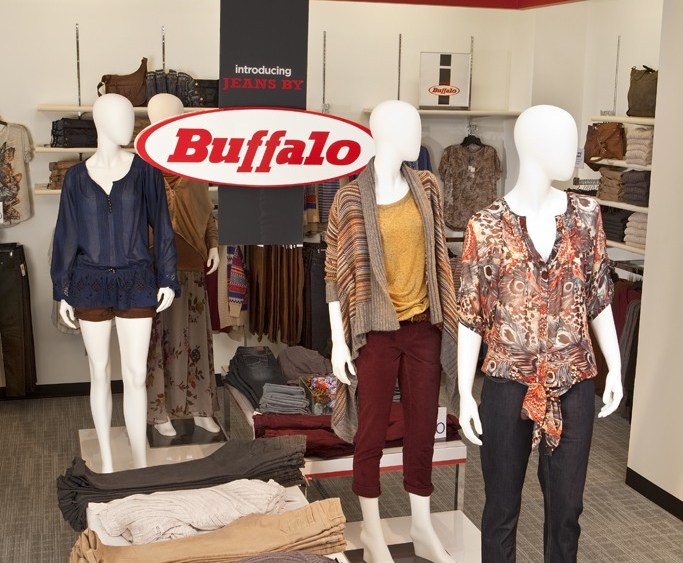 DALLAS — The J.C. Penney of the future has come to life in a 16,000-square-foot mock-up inside a Penney’s store in the Dallas area.

For the past eight weeks, the space has been sealed off from the public with security guards protecting the entrance. But today the wraps come off as Ron Johnson, J.C. Penney Co. Inc.’s chairman and chief executive officer and the architect of its ongoing reinvention, leads a guided tour for the retailer’s top 35 vendors.

The setting reveals how the 1,100-unit, $16.5 billion Penney’s will remodel and re-merchandise all of its stores in the next four years to modernize the shopping experience and inject new brands, not the least of which is Joe Fresh from Canada. In a deal just signed, Penney’s will install Joe Fresh shops at 683 of its locations. The shops will be 1,000 to 2,500 square feet in size, meaning Penney’s will devote a total of 900,000 square feet to Joe Fresh.

RELATED STORY: The Vision for Joe Fresh at J.C. Penney >>

The mock-up also has shops for Liz Claiborne, Izod and the jcp private brand, which will all be rolled out starting in September through much of the chain, as well as shops for Levi’s, Arizona Jean Co. and I Jeans by Buffalo, which are already being rolled out.

“We are moving from being a promotional department store toward a unique classification — the first-ever ‘specialty’ department store. It’s entirely organized by specialty shops and 100 percent staffed by specialists who are experts in products,” Johnson told WWD during an interview inside the mock-up.

Despite being completely merchandised by shops, the mock-up feels spacious, primarily because there’s a wide main aisle called the Street, which is intended as the pathway to guide shoppers past all the men’s, women’s, kids’ and home shops. The Street, as depicted in the mock-up, will serve up amenities, activities and food stops like cafés and juice bars. The first wave of Streets could appear later this year in larger stores.

Penney’s of the future will also be rigged with the latest technologies for mobile and self-checkouts, efficient reordering through RFID, and with what Johnson says will be a better trained, people-oriented and product-proficient staff. They’ll be equipped with handheld devices to speed checkouts and research products, and will be “untethered” to assist shoppers in different areas of the store. The traditional cash wrap stations with registers will be phased out by next year, and high-speed Wi-Fi is being implemented beginning next month in Penney’s top 100 stores.

“It’s clearly inspired by Selfridges and informed by Apple,” said Johnson, who prior to joining J.C. Penney a year ago spearheaded Apple’s retail rollout and is taking much out of the Apple playbook to modernize Penney’s. Selfridges in London pioneered an eclectic and energetic shop-in-shop format that has inspired many retailers.

“In the age of the Internet, if stores don’t provide a high-touch, social experience, they are missing out,” Johnson said.

It’s important for Johnson and his team that the mock-up be well received, particularly from vendors, though Joe Fresh is expected to help attract other brands to Penney’s. Johnson’s reinvention of Penney’s so far has been tough, with disappointing first-quarter results; the sudden departure of Michael Francis, who was president, and concerns that the new pricing scheme isn’t resonating with consumers. Coupons and sales have been eliminated in favor of everyday low pricing, monthly values and clearances beginning every other Friday. Johnson reiterated that coupons aren’t coming back, and he’s sticking to the pricing scheme, though the messaging is being tweaked in hopes of educating consumers better about Penney’s values. Analysts are expecting that second-quarter results would also be challenged.

Among the most interesting innovations of the Penney’s of the future, as shown in the mock-up or described by Johnson, will be:

• Merchandising completely by shops for both market and in-house brands, such as Izod and Arizona. “They’re pure, perfectly branded environments,” Johnson said. Classifications, such as swimwear, underwear and men’s furnishings, will also be housed in shops, making for a total of 100 shops, internally classified in three ways: stores with at least 1,500 square feet; shops at around 500 square feet, and boutiques that are under 500 square feet.

• The Street — the 14- to 15-foot main artery, compared to the existing aisles at eight or nine feet, takes customers past shops and provides a range of amenities including seating, personal checkouts, iPad bars and coffee bars. “The Street is an exciting new pathway for a customer to be relaxed, engaged and inspired, enabled by technology,” Johnson said.

• The jcp bar. A setup for a range of services from checkouts to returns, gift wrapping and product assistance. There will be at least four per store. “These bars do it all. They’re on service steroids,” Johnson said.

• Roving sales associates equipped with iPod Touches to provide mobile checkout and search for items on jcp.com. They will be “certified” as experts in multiple brands to provide better service across different sections of the store.

• RFID technology. “We will be the first retailer to go all RFID,” Johnson said. “RFID can lighten up the sellings [by] reducing the inventory. Our merchants have to learn to buy like specialty-store buyers.”

• Food offerings, such as candy shops, juice bars and coffee bars. “We’re not going deep into food, just touching upon it,” Johnson said.

In addition to remodeling stores based on the Dallas mock-up, Penney’s is developing a prototype for new stores that it could disclose in the future. Within the prototype will be a concept called the Square, which could be a focal point. Officials declined to discuss details about the Square, other than saying it could appear at a store opening in late 2013.

In both remodels and the prototypes, Penney’s will be lighter on merchandise, having already cleared out a lot of the clutter in existing stores. Penney’s previously carried 400 to 500 brands. The store of the future will have about half as many, found in either single-brand or classification shops. In the remodels, shops will be organized by men’s, women’s, kids’ and home. That’s critical to making the Street concept work, since where the Street flows by kids’ shops, for example, it will offer different amenities than where it flows past men’s — perhaps a candy shop instead of a café.

For now, Penney’s isn’t disclosing precisely how manpower in the stores will be deployed, though “specialists” will be available across many shops. Similar to how Sephora operates inside Penney’s stores, each brand shop will be manned by Penney’s employees who will be trained by the vendor to become product experts. Vendors foot some of the costs to build their shops, depending on to what degree they customize them. Penney’s also is not divulging productivity goals, which would vary by brand and classification, though raising productivity is clearly a major objective of the reinvention, in addition to providing a fun, sociable and easier shopping experience. Last year, Penney’s productivity rate came in at a low $132 a foot, but it should increase, particularly with the addition of brands such as Joe Fresh, and possibly others. That compares with Nordstrom at $431 a foot, American Eagle Outfitters at $436 and Aéropostale at $561.

While acknowledging the reinvention will be tough, Johnson does think results should begin to improve as shops are installed this fall. “We will have 10 shops this fall and 40 by holiday 2013,” Johnson said. “Nearly half the stores will be done within 18 months.…Transforming this company is a marathon, but we’ll be at the midpoint by holiday 2013.”

He continues to take the long view. “In four years,” Johnson said, “every store we own will completely look like this mock-up.”