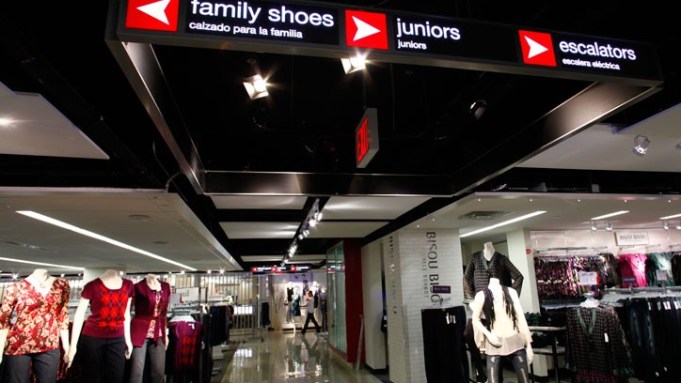 NEW YORK — J.C. Penney has designed a store that never sleeps for a city that’s always in a hurry.

The retailer’s first New York City unit, in the Manhattan Mall on Sixth Avenue and 33rd Street, is filled with technology and services geared to get shoppers in and out quickly, from the new streamlined checkout system, which accommodates more cashiers, to the 550 associates who’ll answer questions and help find products to the Find More interactive panel where shoppers can quickly print out a receipt for out-of-stock or catalogue items. There are even some high-end services more common to specialty stores, such as same-day delivery within Manhattan for $15.

Mike Boylson, the firm’s executive vice president and chief marketing officer, said Penney’s looked at other parts of Manhattan, but the Manhattan Mall, where the 150,000-square-foot flagship is located, was the most attractive, not least because of the huge pedestrian traffic. According to the 34th Street Partnership, a coalition of property owners and city officials working to revitalize the area, 100 million people pass through the four corners of 34th Street and Broadway annually. One million public transit users a day walk through the district. The store, which is located on the mall’s two lower levels, has entrances that lead to a Path station and IND subway station bringing the speed and bustle right to Penney’s doors.

Of course, the location also is near to one of Penney’s major competitors — the Macy’s flagship at Herald Square.

To keep up with the high demand Penney’s is expecting, the flagship will operate around the clock to receive deliveries from its dedicated warehouse in Manchester, Conn.

“We think the turn will be so quick, we’ve got a plan worked out where the store will be a 24-7 operation,” said Tim Lyons, a Penney’s spokesman, noting the flagship will receive up to two dozen trucks a day.

“A lot of the technology is focused on the amount of customers that are going to be here,” said Joe Cardamone, store manager. “Once a sale happens it goes to the warehouse and the order gets picked and shipped that night. If we see stock running low, we can call the warehouse and have a courier service deliver it that day.”

Manhattan caught J.C. Penney’s attention in March 2006 when the retailer unveiled a 15,000-square-foot pop-up shop at One Times Square. “We did One Times Square and business picked up,” said Boylson. “New York was outperforming the rest of the country until we hit the recent slowdown. It had a lot of legs.”

Since the pop-up store, the retailer’s biggest units in terms of sales have been in the Bronx and Queens. Boylson sees potential for more stores in Manhattan and the boroughs. “We’re constantly looking and evaluating sites,” he said. “We’re not in Brooklyn yet. We’ll continue to look for opportunities in New York. We’d have to read this store and see where the business is coming from. We think a lot of this is new business.”

Penney’s flagship required the reconfiguration of Manhattan Mall, a 1 million-square-foot, mixed-use building owned by Vornado Realty Trust, including removing the food court and relocating some specialty stores. Penney’s had many challenges to overcome with the physical space. For example, there’s no entrance to the store on the ground level. Rather, it is reached by escalators or an elevator. The retailer compensated with an 8-foot-by-8-foot JumboTron with the Penney’s logo surrounded by TV screens suspended from the atrium. There’s also a 35-foot-by-35-foot red sign with a fluorescent J.C. Penney logo erected on one of the walls leading to the space. In addition, six huge glass showcase windows on the mall’s main floor are positioned between the escalators and around the atrium.

Ceilings throughout the store are low. To alter that perception, Penney’s used raised panels that radiate light and appear to float from the ceiling.

While the Manhattan flagship is smaller than typical Penney’s malls units, it’s nonetheless jam-packed with merchandise. “We created wall fixtures to get more merchandise capacity and get enough merchandise in the store to meet the expected demand,” Lyons said.

“They really took care of every inch of the building in terms of filling it with merchandise,” Cardamone said. “This store will hold more than typical stores.”

Catering to rushed consumers is one way Penney’s hopes to compete with the 800-pound gorilla across 34th Street. Macy’s lucrative Herald Square flagship, which is said to generate about $650 million to $675 million in annual volume, is one block from Manhattan Mall. The larger store has never been known for its service and this is where Penney’s aims to differentiate itself.

“We received the American Express award for being number one in service,” Boylson said. “We were even ahead of Nordstrom. We put a heavy, heavy emphasis on service. Highly satisfied customers tend to spend more and be much more loyal customers. That’s one of the advantages we have. We’re not going to change our game to go head-to-head with Macy’s. We’re going to fight for market share and win market share. They’re not going to roll over and let us have the business. Macy’s has been getting more promotional. We’re not fixated on Macy’s, although we have the tongue-in-cheek advertising campaign.”

Boylson was referring to a campaign for the flagship’s opening that features taglines such as: “We heard Herald Square needed a good department store,” and “The real miracle is now on 33rd Street,” a nod to the classic film, “Miracle on 34th Street,” where a man working as Santa Claus for Macy’s believes he’s the real Kris Kringle.

Boylson said the Manhattan flagship will be an introduction to Penney’s for many customers, and they will be surprised by what they see, including “the style and quality we have at really shocking price points.” Generally, Penney’s price points are lower than those at Macy’s. Among the brands for women, Penny’s will sell I [heart] Ronson, American Living, Nicole by Nicole Miller, Allen B. by Allen Schwartz, Liz & Co., a.n.a. and Bisou Bisou. There’s career sportswear from Worthington and St. John’s Bay; a Paul Frank T-shirt wall; Fabulosity by Kimora Lee Simmons and Decree for juniors; Arizona jeans; Joe by Joseph Abboud, exclusive to the flagship, and Cindy Crawford Style for the home.

The store has a large fine jewelry department and big handbag and costume jewelry areas. Shoes for men, women, children and athletes are sold side by side for convenience. There’s also a full-size (for Penney’s units) Sephora, despite the fact that there’s a stand-alone Sephora store around the corner on West 34th Street. Boylson said as Penney’s has opened more and more Sephora units, it hasn’t cannibalized the stand-alone Sephoras in the malls.

“Actually, the opposite has happened. When they run out of something, the sales associates refer customers to us and vice versa,” he said.

“With our moderate price point being [geared to] average Americans, they’re going to be very blown away by Sephora,” Boylson said. “We can coexist. We’ve put a lot of style into our assortments. There’s a lot of people who are not aware of what Penney’s has. Manhattan will help us get the word out in a big way.”