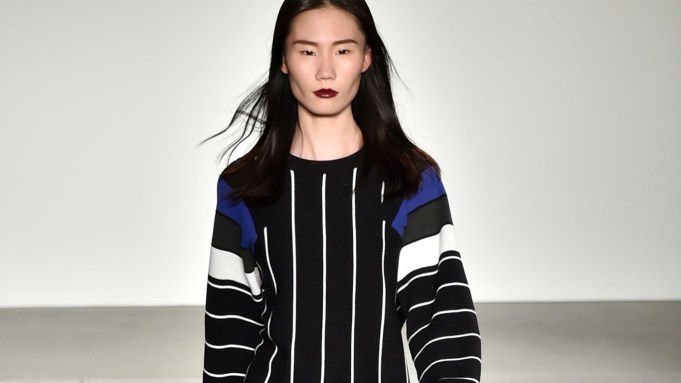 Shoppers seeking American goods — fashion-related or not — have the option of heading to the U.S. mall component of JD.com, which became available to Chinese consumers in July.

At Wednesday’s event, Lijun Xin, president of JD Mall’s apparel and home furnishing business, said JD has been able to grow its revenue base because of one word — integrity. “We always strive for providing the best quality of goods for consumers.” That was the latest jab at Alibaba, which is the company’s biggest competitor in China and has come under scrutiny for counterfeit goods that have found their way onto its network. (Alibaba has said it is committed to the protection of intellectual property rights and the fight against counterfeiting). The firms are racing to grab market share on their home turf. Xin’s presentation touted the company’s “zero-tolerance policy to low-quality goods and counterfeits.” He added, “China’s consumers are increasing their appetite for luxurious goods.”

Belinda Chen, general manager of international business development in the apparel and home furnishing business unit, provided an update. She said there are 668 million online users in China, from which 374 million are online shoppers, a factoid she noted was comparable to the population of the U.S. Chen also said online sales totaled 12.3 percent of overall spending at retail in 2015, and that number is projected by JD to grow to 20 percent by 2017. While initial online transactions were entirely consumer-to-consumer, business-to-consumer sales now account for 52 percent of online sales.

Chen said JD’s partnership with Tencent allows it to tap into the social network’s 600 million users. JD has 132 million active customers and 40.2 million sku’s. Given its base of warehouses and delivery hubs, orders placed by 11 a.m. receive same-day delivery service, while those placed after 11 a.m. are delivered the following day.

Xin said there are more than 1,000 brands represented on U.S. Fashion Mall, and that the overall JD consumer base for fashion has a ratio of three women for every two men.