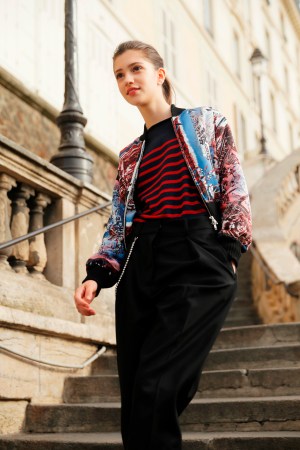 TOKYO — Jean Paul Gaultier is about to bring some Parisian flair to Japan.

The French designer’s affordably priced collection for Japanese retail giant Seven & i Holdings will hit the company’s Ito-Yokado, Sogo & Seibu stores on Oct. 1. The lineup, which includes striped boatneck jersey tops and a trenchcoat in a coated fabric, will also be available through a new online portal that will allow customers to pick up their purchases from their local 7-Eleven convenience store.

The Gaultier launch is part of Seven & i Holdings’ broader push into private-label clothing and collaborations with big-name designers. The company is launching a new fashion brand called Sept Premières and Gaultier’s designs will comprise a capsule collection within the range called Jean Paul Gaultier for Sept Premières for two seasons. The retailer plans to hire other designers to do future collections for the brand.

Sept. Premières is a French take on the “Seven Premium” brand. Seven & i uses the Seven Premium brand on a whole range of private-label goods, from rice balls and white bread to underwear and stockings.

“It’s a little more expensive than regular [convenience store] things, but very good,” said Mari Tsutsumi, director and executive officer of original product merchandising at Sogo & Seibu. “Recently the amount of people who are asking for things of fine quality are increasing, so we started thinking, maybe it would be a good idea to do fashion.”

Tsutsumi said the timing was perfect for Sogo & Seibu — along with parent company Seven & i — to launch a new, fashion-forward private label.

“There have always been people who like designer brands like Gaultier, Hermès or Céline, and even now these brands that have added value are selling very well. But sales of domestic brands that are made in Japan and can be found at any department store haven’t really increased over the past five or six years; they may even have decreased a little,” she said. “But on the other hand, six years ago Sogo & Seibu started a private brand called Limited Edition, and that has really been growing each year for the past six years. So when we think about that, it seems clear that, more than brands they can get at any department store, customers want brands that they can only buy at Sogo & Seibu.”

“In the past people thought that private brands wouldn’t sell unless they were cheap, but now that’s completely untrue,” Tsutsumi noted. “Even if the price isn’t all that cheap, people are looking for a balance between price and value. They want things that make them think, for this price this is a really good product.”

Tsutsumi said the choice of Gaultier as the first designer to collaborate on the line was an obvious one.

“We’ve done business with Gaultier for a very long time, and just like around the world, he is extremely famous in Japan with a lot of fans. So our president, [Ryu] Matsumoto went to meet with Gaultier in person to persuade him,” she said. However, she noted that this was a relatively easy task, as Gaultier immediately took to the idea.

For the upcoming fall season, Gaultier is personally designing 50 styles for Sept Premières. They have a Parisian-chic look to them and some feature trompe l’oeil details. There are dresses that are made to look like two pieces (such as a cut-off trench coat top over a leather skirt), and a blazer with long, faux pearl necklaces attached. There are also several motifs and prints based on common items found in Gaultier’s couture atelier, such as pins and tape measures.

“There’s something interesting about bringing couture into the everyday,” Tsutsumi said.

Jean Paul Gaultier for Sept Premières will go on sale at all 24 Sogo & Seibu department stores in Japan, as well as at 45 Ito Yokado stores (135 Ito Yokado stores will carry the wider Sept Premières line). Dedicated in-store corners will be constructed for Sept Premières, and those stores that carry the Gaultier line will feature it prominently. There is a team of about ten people working on the brand, consisting of staffers from both Sogo & Seibu and Seven & i. It is the first project on which the two companies have worked jointly, but Tsutsumi hopes it’s not the last.

“I think if we work together more in the future, our sales fields would increase, and we can break down walls together. If we each contribute our own strengths I think we can make really great things,” she said.

Sept Premières will be launching at the same time as Seven & i’s new omnichannel shopping portal, which the company says will introduce a whole new style of retailing. Customers will be able to use their computers or mobile phones to shop products from all of the different Seven & i group companies. Purchases will either be shipped to the customer’s home or delivered to a chosen 7-Eleven location, where the customer can pick it up 24 hours a day. Seven & i currently offers a similar service, but only for a limited number of products. Roughly 70 percent of cosmetics purchases are picked up from convenience stores.

“In the future, the lines between department stores, supermarkets and convenience stores will disappear, and customers will be able to buy anything anywhere,” Tsutsumi said. “The change in customers’ buying habits is being manifested in a big way right now, so I think there’s a real chance [to take advantage of that]. We decided to give it a try.”