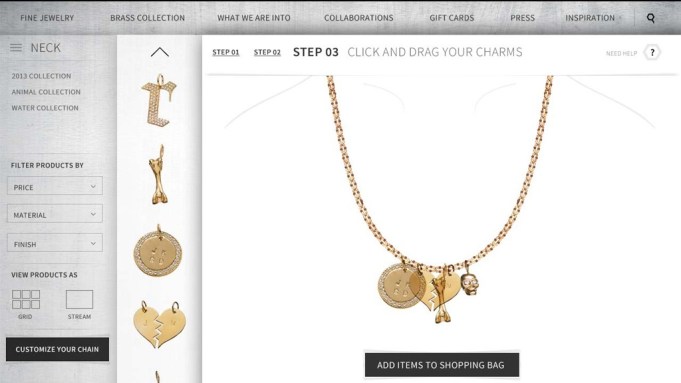 Jennifer Fisher is going back and burnishing her jewelry business’ foundation, going live today with the first major overhaul of the eight-year-old company’s e-commerce site.

The designer’s new online home at jenniferfisherjewelry.com will carry the fine jewelry she started quietly designing in the 2005 as well as her contemporary brass line that launched in 2011.

“I started the business as direct to consumer, [and most companies] start the other way,” said Fisher. “It wasn’t being done this way. I don’t sell my fine jewelry through retailers. We’ve always flown under the radar because we never had our name on a case. People had to seek it out, it was sort of underground; we really only sold on the Web site.”

Designed by Calliope Studios, with images shot by Kenneth Cappello, the site is more user-friendly, with a build-your-own necklace section that personalizes the designer’s best-selling charm necklaces. Social media has also been integrated into the site — instead of a blog, Fisher has opted to populate a portion of the site with her Twitter, Pinterest, Facebook and Instagram posts in real time.

Until about two years ago, Fisher relied on word of mouth, magazine placements and celebrity customers for marketing. But it’s been support from the Council of Fashion Designers of America (she was named a finalist in the CFDA/Vogue Fashion Fund competition in 2012) and a two-year retail partnership with Barneys New York that have catapulted Fisher’s vision into an approximately $10 million dollar business, according to industry experts.

Fisher said direct-to-consumer sales make up about 90 percent of the firm’s overall sales, which have more than doubled year-over-year. Sales next year are projected to rise 60 to 70 percent.

A series of different-sized gold bangles with burnished diamond dates, equations, words or initials are starting to become a driver of sales for Fisher. A thin version starts at $3,800 (and goes up to about $5,000 once diamond letters are engraved) and a thicker style starts at $6,000.

Fisher wholesales her brass, gold-plated contemporary line to approximately 50 doors worldwide, including all Barneys stores as well as Holt Renfrew in Canada, Lane Crawford and Barneys Japan. Net-a-porter is set to begin carrying the designer’s brass range next year. The sweet spot for retail prices is $350, including charm necklaces, rings and cuffs.

“With this type of business model, it’s hard to get the support because you aren’t doing it the way everyone else does it,” Fisher said. “It’s hard to get industry support and get your name out there. With fine jewelry, women like to see it in the store. It’s really important for marketing, and if you don’t have the piece of the puzzle, it’s really difficult. That’s why we work so hard with celebrity [placements].”

Fisher expects the Web site to be a significant driver of sales in 2014 and is also planning a New York City store next year.