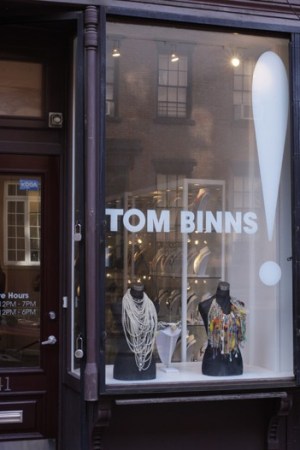 Tom Binns wants to express himself on his own terms.

This story first appeared in the March 2, 2009 issue of WWD. Subscribe Today.

The jewelry designer opened his first store last month on Perry Street in New York’s West Village. Known for his edgy jewelry and equally edgy views on the industry, Binns said he opened the shop to properly represent himself without having to rely on other methods, such as editorial coverage or wholesale partners.

“It’s nice to present yourself in your way, in your space,” said Binns, a native of Belfast, Ireland. “You don’t always get fair treatment in magazines. They don’t always contextualize your work in the best possible way. I thought it would be nice to have a point of view of my own. Having your own storefront is a window to your world. People can come along, and I can say, ‘Welcome to my world.’”

Binns described the nearly 300-square-foot store as clean and minimal, so as to present jewelry collections he described as “full-on.” The store features white walls and white countertops that to Binns represent a “blank canvas” on which to show his work.

“It’s like wearing a plain white or black dress — one piece of jewelry really pops,” Binns said. “You feel good when you are minimally dressed and the jewelry is very grand. It makes you feel empowered.”

The boutique exhibits over 30 collections of Binns’ jewelry, including one-off and couture pieces. Styles retail from $180 to $25,000. Binns is also including designs dating back 10 or 15 years, as well as collections that neither Henri Bendel nor Jeffrey — his New York retail stockists — carries. Other retail outlets that carry his collections include Net-a-porter.com and Shopbop.com.

With its accessible prices and fashion-driven design, retailers appreciate Binns’ cutting-edge take on classic styles and say consumers today are buying into his big, fun fashion. Some cite Binns as the father of the layered, “more-is-more” costume-jewelry look that many younger designers have adopted. Not one to take his craft too seriously, some of Binns’ best-selling items include identification tags blasting four-letter words. After the designer moved from London to New York in the late 1980s, he became the darling of the fashion community, gaining the appreciation of retailers, editors and the Council of Fashion Directors of America, who awarded him Accessory Designer of the Year in 2006.

“It’s an irreverent play on the classics — I never thought about doing crystal stones all over neon or the remix of estate pieces like crystal mixed with pearls and skulls,” said Ann Watson, vice president and fashion director at Henri Bendel. “He also appeals to a broad range of customers, from Amy Winehouse to Michelle Obama.”

Binns currently lives and works in Venice Beach, Calif., having left New York after 9/11. The designer is looking forward to reconnecting with the city that helped launch his career and would potentially open other stores, perhaps in Berlin or Tokyo. He declined to reveal sales projections, saying only that he wants the store to “make lots and lots of money.”

“Tom is irreverent, fashion-driven and loves color,” said Watson. “He approaches design in the way we approach our store experience insofar as always looking to surprise and excite the customer. He is always looking to give the unexpected, and he does so without even trying.”