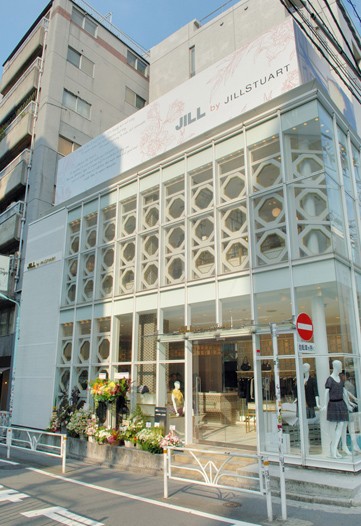 TOKYO — Jill Stuart is giving a diffusion line another try and she’s doing it in Japan, where her girly looks have a cultlike following.

Jill Stuart and the designer’s local partner, Sanei International, opened the first Jill by Jill Stuart flagship here on Saturday. The two-level store, covering 1,292 square feet, is located on trendy shopping strip Cat Street near outposts of American Apparel and Patagonia. The unit is the first step of a broader expansion plan to open 15 Jill by Jill Stuart stores in Japan over the next three years and achieve an annual sales volume of 3.5 billion yen, or $31.97 million at current exchange, over the same time frame.

“We wanted to appeal to a broader audience so the clothes are more basic,” said Ken Sugiyama, group chief for Jill by Jill Stuart at Sanei International Co. Ltd. “We stripped away some of detailing found on the main line. This is more of a simpler look.”

There’s a dose of irony in the collection’s backstory. Last year, Jill Stuart launched a contemporary sportswear line in the U.S. called Jill that resembled the Jill Stuart line distributed in Asia, but the company pulled the plug after the spring 2008 collection. Sugiyama said Sanei wanted to revise the concept of a diffusion line in Japan, capitalizing on the designer’s popularity here. Jill Stuart’s main collection posts annual sales of about 9 billion yen, or $82.2 million, a year in Japan.

The new diffusion line, featuring flirty takes on knitwear, dresses and lingerie, is about 35 percent cheaper than Jill Stuart’s main collection in Japan. Prices range from 5,250 yen, or $48, for a T-shirt to 33,600 yen, or $307, for a pleated lace-trimmed dress.

The boutique, with striking octagonal windows, glass mosaic accents and boudoir-style lingerie department, stocks the newly launched Jill by Jill Stuart collection and an eclectic selection of other merchandise like Sir Alistair Rai scarves, Dogeared jewelry and T-shirts from Play by Charlotte Ronson, another brand in the Sanei stable.

“Japanese consumers used to be focused on one brand or one style but that’s changing,” Sugiyama said, explaining the multibrand approach of the store.

The executive admitted there is a risk the new collection will cannibalize some of Jill Stuart’s main line business — a point worth noting since the new store is around the corner from the Jill Stuart flagship. But he said the company hopes to minimize any overlap in the customer base since the other Jill by Jill Stuart stores will be in younger, fashion-driven department stores like Lumine and Parco. Jill Stuart’s standard collection for Japan sells in more upscale spots like Isetan and Takashimaya.

“Jill Stuart’s main line competes with brands like See by Chloé or Marc by Marc Jacobs. Jill by Jill Stuart will compete more with Japan’s specialty boutiques like Aquagirl and Another Edition,” he said.

He added Sanei might consider exporting Jill by Jill Stuart to other markets in Asia, especially Hong Kong, but nothing is certain yet.

In the meantime, Stuart has plenty of fans here. In March, the designer staged a runway recap of her fall collection to wrap Japan Fashion Week. After the show, throngs of young women surrounded the designer to get her to autograph the hand mirrors they received as souvenirs.

“Japanese girls don’t want to dress to seem mature or grown up. They want to look cute,” Sugiyama said. “Jill really knows how to do that well.”