A bright shade of orange heralds the arrival of the Canadian retailer in Midtown Manhattan, where it today opens a 15,000-square-foot flagship. 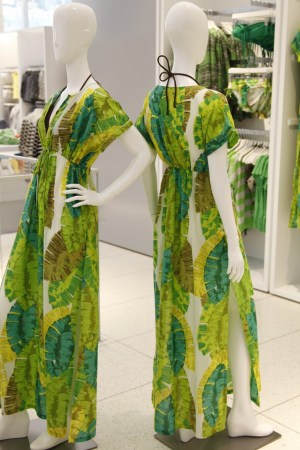 NEW YORK — A bright, in-your-face shade of orange, Pantone C021, to be exact, heralds the arrival of Joe Fresh in Midtown Manhattan, where the retailer today opens a 15,000-square-foot flagship at 501 Fifth Avenue at 43rd Street.

Orange, the Canadian retailer’s signature color, is prominently splashed on the walls of the flagship and figures in advertising and marketing campaigns. It’s also conspicuous on apparel. “Orange happens to be really hot for the last two seasons,” said Joe Fresh founder Joseph Mimran. “Being able to shout out our identity through our brand color is great.”

This is Joe Fresh’s fourth store here, and one of the largest in the chain. Canadian stand-alone units are smaller, with the largest only 9,500 square feet. Reaction to the brand has been “very strong,” since Joe Fresh unveiled units in the fall on upper Madison Avenue, the Flatiron District and West 34th Street. “There’s still much more work to do” in terms of educating consumers about the brand, he said, adding, “Sometimes fast fashion gets labeled as poor quality. That’s something we’ve been fighting against. The big challenge at our price point is getting the transactions and volume. This is a very competitive market.”

Mimran said there’s more opportunity for expansion in Manhattan, citing SoHo, the Meatpacking District, the Upper West Side, Upper East Side and Brooklyn. “This is a pretty big step for us,” Mimran said of the flagship.

He declined to discuss sales projections, explaining that Loblaw, the supermarket chain where Joe Fresh is sold, is a division of George Weston Ltd., which doesn’t segment sales of its units. Joe Fresh is sold in 300 Loblaw Real Canadian Superstores and 12 stand-alone studio stores. “We are benchmarking against other apparel retailers” on this stretch of Fifth Avenue. “We’re in it for the long haul. It takes time to evolve a brand in a market.”

An ad campaign launched this month, which included a takeover of the Times Square subway station. TV commercials broke on Thursday.

Mimran is looking at further international expansion in October. “This is our first international foray,” he said. “The U.K. is a very crowded market. We have a link there with the Weston family — Galen Weston, who founded Primark, of which Loblaw is a division. He bought Selfridges in 2003.”

Joe Fresh distills trends for its customers. “The brand has a young, hip feel and lots of good taste details,” Mimran said. There’s a statement about stripes with dresses for $29 and skirts, $19; bright colors with crepe de chine silk blouses for $39 and $29; and colored denim skinny jeans, $19. Accessories such as leather totes, $99, and $79 for crackle leather; sunglasses and scarves are also sold, along with Joe Fresh beauty.

Joe Fresh is expanding its offering of men’s, dressy women’s apparel, accessories and activewear. “There’s a level of sophistication to activewear,” he said. “For us in Canada, it’s a hugely important piece of business.”

The building housing the Joe Fresh flagship was designed by Gordon Bunshaft in 1952 and received landmark status in 1997. Mimran was proud of the 12-month renovation the space had undergone. A 70-foot-long gilded screen by sculptor Harry Bertoia, which had been commissioned by the original tenant and then removed, was reinstalled on the second floor behind the cash wrap. “It had been cut into seven sections, each weighing 7 tons,” he said. “We had to remove a window to get it inside. There was concern that the building would get overcommercialized. We tried to respect the space.”