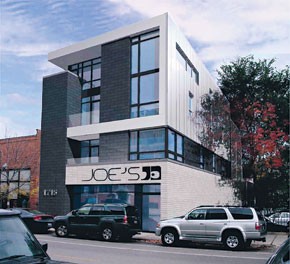 Joe’s Jeans is joining a growing list of denim brands pushing into the retail side of the business.

The Los Angeles-based premium denim brand said last week it signed a lease for its first full-price branded store at 1715 North Damen Avenue in Chicago’s Bucktown neighborhood. The 1,890-square-foot store is to open in August and will be in good company with neighbors such as Marc by Marc Jacobs, Nanette Lepore, G-Star, Intermix and Scoop NYC.

Marc Crossman, president and chief executive officer, said the company has been planning its expansion into owned retail for more than a year and wants to open as many as 50 stores in the next five years.

“We’re making sure we build a management team around us that has done this before,” Crossman said. “We have a very full collection, so if you look at our line, we offer everything from outerwear to knits….We want to showcase that to the rest of the world.”

The company’s move into retail comes as denim-based brands across the price spectrum devote substantial resources to the same goal.

True Religion has been among the most aggressive, opening 11 stores last year and signing leases for seven new stores this year. Levi’s has 73 stores in North America and will open a Times Square flagship in New York in May. Silver Jeans also has plans to open its first branded store in Denver, with more likely throughout the U.S. Premium denim market leader Seven For All Mankind has also started its own retail campaign with the stated goal of opening 100 stores over the next five years. The competition for prime locations is intense.

“We’re in a period where everybody is trying to grab real estate to open stores,” said Crossman, who added that the company’s search for space will focus on high-quality locations like Bucktown in Chicago, Robertson Boulevard in Los Angeles and Beverly Hills. He hopes to have four stores open by the end of this year.

Building the retail heft of Joe’s Jeans is the latest development in what has been a tumultuous several years for the brand. Crossman has witnessed significant changes since joining the board in 1999, when the company was based in Tennessee and going under the name of Innovo Group.

“We were one of the largest suppliers of aprons to Wal-Mart,” said Crossman, who was working as a vice president and equity analyst with J.P. Morgan Securities in New York. Innovo’s second largest product was canvas tote bags.

In 2000, Innovo moved to Los Angeles and acquired a private label apparel business doing knit tops for J. Crew. Eventually, the company began producing denim bottoms for Mossimo. Innovo’s private label business grew from there, producing denim bottoms for retailers such as American Eagle Outfitters and Target. In 2001, designer Joe Dahan launched Joe’s Jeans and Innovo signed on as a licensee. It was the first license the company took on and, Crossman said, its most successful.

Crossman left his Wall Street job to become Innovo’s chief financial officer in 2003. He was appointed president in 2004 and ceo in January 2006, when he began steering the company toward its most successful segment — Joe’s Jeans.

The private label business began to die off in 2006 after American Eagle left Innovo for a new supplier. Soon after, the company exited its other licensed brands, which included Fetish, Shago and Betsey Johnson. Finally, in 2007, Innovo acquired Joe’s Jeans outright for $17 million in cash and stock and changed the company name to reflect the new brand focus.

“[Joe’s] was the only one we felt had real longevity,” Crossman said. “It had been around for seven years and had transitioned from being a label to a brand.”

As part of the sale agreement, Dahan became the company’s creative director and was given a seat on the board. He is the largest stockholder, with about 24 percent of outstanding shares and is entitled to receive a percentage of gross profits until 2017.

Wall Street is beginning to notice. Eric Beder, retail analyst at Brean Murray, Carret & Co., initiated coverage of the company last month with a “buy” recommendation and a $2 a share price target. In his report, Beder acknowledged that as a small-cap stock, Joe’s was a high-risk investment and that the premium denim market was maturing. However, he said Joe’s established core premium denim products would provide a springboard for growth.

“After a period of missteps, management has realigned the operations and shifted the focus to profitable top-line growth and margin expansion,” Beder said in his report. “We believe there are a number of short- and long-term catalysts, which should lead to sustained upside.”

Crossman estimated the brand is in 1,500 doors nationally, a distribution level he said isn’t likely to change dramatically. The department store channel represents the majority of business. The company’s largest customers are Nordstrom, Macy’s and Bloomingdale’s, which accounted for 36 percent of sales last year, or $22.6 million. Retail consolidation and a shakeout in the premium denim market have helped the brand’s position.

“As we talk to our buyers, and certainly on the department store side, they are looking to reduce and get down to five or six players that they can give big shelf space to,” he said. “Retailers don’t want to take a risk on a brand they don’t think can deliver.”

Crossman said the rest of the year will be difficult, but he doesn’t see economic conditions worsening.

“No one is coming back and reducing their plans with us,” he said.

And to Crossman’s surprise, the hunt for the best retail spaces remains as competitive as ever. Despite perceived softness in the overall apparel market, he said landlords have been able to bid up leasing prices on retail locations. In the year his six-person retail management team has spent scouting locations, they have lost space to higher bidders.

“The premium space is a little better insulated relative to some of the other categories,” he said. “It’s not an easy environment in any way, shape or form, but relative to the low end, it’s not as difficult.”

If Joe’s Jeans succeeds in opening 50 stores during the next five years, Crossman believes retail will represent roughly one-third of the company’s business.

“When we look at the operating margins of the retail business, it clearly is better than our wholesale business,” he said. “But for us, the main driver was to showcase our full collection. We don’t want to be another denim brand with a jeans wall. We view ourselves as a full collection and that’s what we need to bring to the public.”