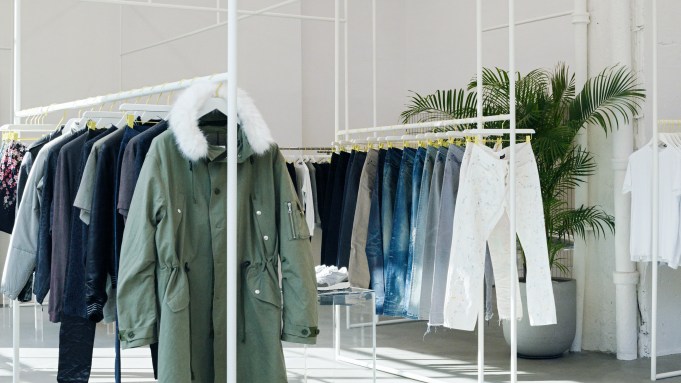 “New York is the big leagues and we appreciate that we’re here. This brand was birthed in New York — we did nine shows here — so in many ways, it feels like a homecoming.”

With that declaration, John Elliott on Thursday will open the doors to a flagship on a prime corner in New York’s SoHo. Although Elliott is headquartered in Los Angeles, the designer considers New York his second home and this part of SoHo as his neighborhood.

“Whenever I’m in the city, this is where I hang out,” he said during a walk-through with WWD as the team was putting the finishing touches on the 2,700-square-foot store at 270 Lafayette Street on the corner of Prince, across from Scotch & Soda and steps away from Sant Ambrose. “So when I had the opportunity to sign this lease, it was a no-brainer.”

Formerly home to G-Star, this marks the designer’s third storefront, following Melrose in Los Angeles and the Design District in Miami.

The New York store is consistent in design with the other units. It was designed in collaboration with Stefan Wiemer, with an open floor plan and minimalistic feel, with white walls and concrete floors. Ground-to-ceiling windows let in natural light to showcase the brand’s collection, collaborations and shoe offerings that are displayed on clear shelving units and industrial white racks. Situated on a mezzanine level is the brand’s first in-store shop collaboration with art book publisher Taschen.

Elliott said when he took possession of the space three months ago, he immediately stripped the decals that had obscured the open view of the neighborhood, redid the walls and floors to make them more industrial, installed some Japanese tiles and brought in fixtures that are one continuous piece and feel more like a piece of art than traditional racks.

Elliott acknowledged that the brand has been keeping a low profile for the past 18 months, but it was intentional. “It was an opportunity for us to get healthy and place some bets,” he said. That included extending the brand’s casual streetwear aesthetic into leather goods, footwear and a soon-to-launch Italian tailored clothing collection that he described as “a smarter approach to dressing.”

The brand is also investing in physical retail. Although the collection is still sold through the wholesale channel, Elliott said that is “not the majority of the revenue. Direct-to-consumer is our focus now. In the early days, it was about survival and cash flow. Now it’s very strategic.”

Although he declined to say where and when the next stores may open, he said, “We’re not done yet. There’s nothing finalized, but we’re growing and we see retail as a very valuable tool to introduce new people to the brand and help us see how customers interact with it.”

For the SoHo store, Elliott said the mix was selected to meet the needs of the New York customers and the climate here. So there’s plenty of outerwear, knitwear “appropriate to the city,” traditional jeans and others with paint-splatter, mohair sweater sets and the obligatory leather biker jacket.

“We wanted to treat New York with the appropriate respect — show up and make an impact,” he said.