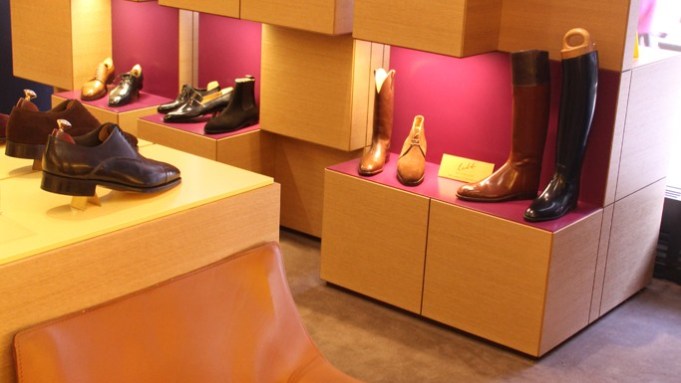 John Lobb wants its customers to take a walk — a seven-block stroll north, actually — to its new home.

After 12 years at 680 Madison Avenue in Manhattan, the luxury shoemaker tonight will celebrate the grand opening of its new boutique at 800 Madison Avenue. The 700-square-foot shop on 68th Street, designed by Rena Dumas, is steeped in luxury but feels comfortable at the same time.

“Moving closer to the Upper East Side is better for us,” said Renaud Paul-Dauphin, chief executive officer of the Hermès-owned brand. “It’s a good neighborhood and more elegant.”

Paul-Dauphin added: “New York is a key city for us. We have lots of American customers who have found their way here.”

The store sports a similar design as the company’s other major boutiques around the world. “It’s very sleek and allows for the proper presentation,” he said, pointing to the assortment of shoes perched on yellow shelves throughout the store. “We think of it as a small theater. The shoes are on the balcony and the customers are on the stage.”

Ready-to-wear shoes start at $680 and go up to $1,900. Bespoke models start at $7,400. The store also has a one-of-a-kind pair with gold soles and buckles for $24,000. The rtw shoes are made in England while the bespoke models, which now account for around 10 percent of the business, are created in Paris. “It’s the heritage of the company,” he said, “and we have a faithful customer who buys them. We have 160 years of history and that’s such an advantage for us.”

In addition to shoes, the shop also showcases the company’s new collection of small leather goods called Twinstitch. The wallets, business card cases and other items incorporate both suede and leather and use the same double stitching as the shoes. “We like the idea of small leather goods being comfortable,” he said.

This is the second freestanding John Lobb store in the U.S., along with Costa Mesa, Calif., and there are 23 boutiques around the world. “We have a strong position in Europe,” he said, noting that the company recently entered the Middle East and China as well.

Paul-Dauphin said early next year the second floor of the Madison Avenue store will be transformed into a U.S. showroom for the brand, which is being reintroduced at Barneys New York for spring and also sells at MrPorter.com. Even so, he stressed the plan is not to expand aggressively in the U.S.: “The policy of John Lobb is not to open too many doors, but to look for just the right spots.”

Paul-Dauphin said the company considers itself a “local business,” attractive to men in the neighborhoods in which it operates. “Men don’t buy shoes when they travel,” he said. “And they like privacy. This store is discreet, and that’s part of the value of the brand statement.”

He said the company is doing “extremely well” despite the worldwide recession and attributes it to the customers’ quest for value. “They don’t want to waste money,” he said. “They like things that are sustainable, and you can keep resoling the shoes and keep them for a lifetime.”

Tonight’s event will feature renowned French illustrator François Avril, who created a New York street scene for the company to celebrate its relocation. Guests will be treated to autographed copies of the print.