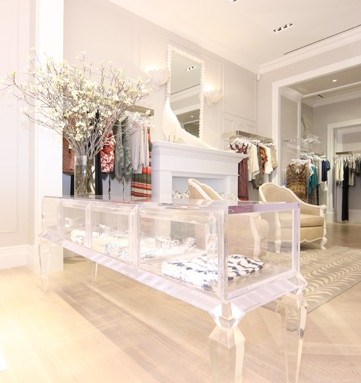 “We’re much more focused on the brand,” said Azria, who is the older brother of BCBG’s Max Azria. “Stores are showing the complete Joie collection in one place. The prices are more friendly. As a result, we will be getting more shop-in-shops. We started with Saks Fifth Avenue and Bloomingdale’s.”

Azria said Joie has slowly grown its distribution from 120 doors to more than 1,000 doors worldwide.

“The growth has come from two different places,” Azria said. “In addition to increasing our business with existing stores, a year ago, we began to offer distribution in Europe and other countries. A year later, we’re in 20 different countries.”

Joie’s only other store is a small boutique in Paris in the Palais Royale. “It’s like a window for the European market,” Azria said.

In department and specialty stores, Joie sits next to brands such as Theory, Vince and Marc by Marc Jacobs. “We have 20 percent to 30 percent average sell-throughs in stores,” said Azria, who doubled the business from 2008 to 2009.

“We know that the Upper East Side customer is consistent with the brand,” Azria said, explaining why he gave the new Joie flagship the look of a Parisian pied-à-terre. Azria claims the Joie shopper is between 16 and 60 years old. The design of the store features light herringbone wood floors, Lucite cases for accessories and jewelry, a table surrounded by four low stools and subtle murals depicting vines and birds. A pair of Louis XV Bergere chairs frames the fireplace, which is filled with pots of white orchids. On the mantel is a pure white taxidermy bird. Armoires displaying shoes have whimsical bird carvings.

Azria said he’ll do jewelry, sunglasses and handbags for the Madison Avenue store, as well as collaborate with other designers and artists.

“The company is very strongly financed,” Azria said. “There’s no investors and no debt.”

While growth is clearly on his mind, Azria is aware of the capricious nature of consumers. “I don’t think you can be successful everywhere for a long time,” he said. “I have to keep the image of the brand authentic. Everything is perceived by consumers. In contemporary, when a brand gets over a certain amount of volume, the brand isn’t attractive anymore. No brand should do over $150 million.”

Azria, who declined to divulge the company’s sales volume, said there’s still room for growth. He’s seeking space in Century City, Calif., and SoHo and 59th Street, here, and talking to potential overseas retail partners such as Printemps in France and Itochu in Japan.