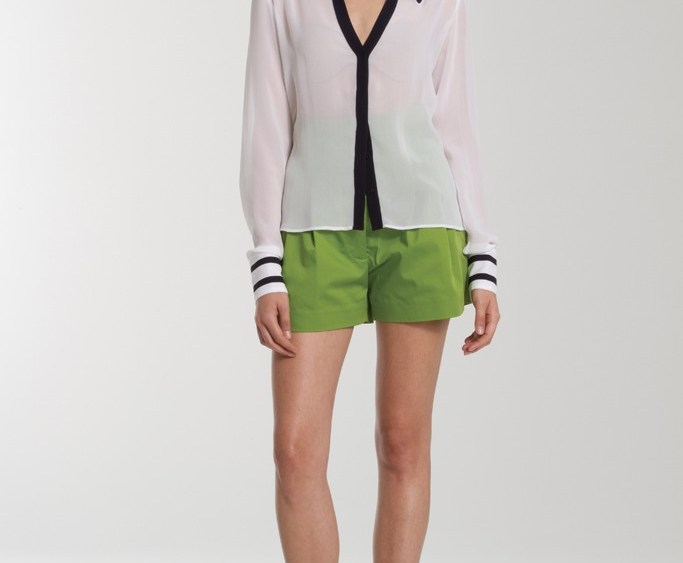 The line will be available in March in 15 doors, as well as a microsite on jny.com and bloomingdales.com.

The Wes Gordon x Jones New York collection retails from $99 to $475, which is 25 percent higher than the existing Jones New York product. The collaboration is for one season.

“The collaboration with Wes ties back to a larger Jones Group initiative focused on talent, creativity and product innovation,” said Susan Metzger, chief executive officer, women’s wholesale sportswear at The Jones Group Inc. “We loved Wes’ approach to modern tailoring and really saw him as a young designer doing amazing work that is inspiring. This collaboration with Wes gives us another avenue and point of view in which to continue to explore and evolve what wear-to-work means to women.”

The line is designed to play off classics with new takes on shape, silhouette and details. Merchandise will include blazers with leather sleeves, military jackets, sateen pants, white linen shirts, dresses and swing and trenchcoats.

Asked how this offering differs from what Jones has designed in the past, Metzger replied, “Our DNA is rooted in what women wear to work and as those needs change and evolve, so do we. Wear-to-work isn’t just about a suit, there is a new modern classic sensibility of dressing that embraces tailoring, separates and soft suiting, and our partnership with Wes helps us to explore this.”

Explaining what attracted him to the Jones collaboration, Gordon said, “Jones New York has a rich history in American fashion and tailoring. While working with their team on the capsule collection, our goal was to create modern classic pieces that were accessible and easily incorporated into an existing wardrobe,” he said.

Gordon, a 25-year-old designer who hails from Atlanta and graduated from Central Saint Martins in London, is known for his modern and youthful take on women’s separates. Gordon’s designer collection is sold in stores such as Bergdorf Goodman, Saks Fifth Avenue and Kirna Zabête in the U.S. and Harrods in London.