With an assist from her younger sister Ashlee, the actress is tapping into a new category. 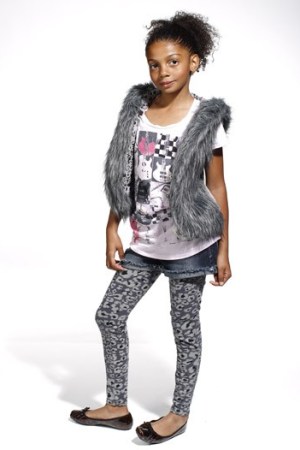 With an assist from her younger sister Ashlee, Jessica Simpson is tapping into the tween category.

This story first appeared in the June 1, 2011 issue of WWD. Subscribe Today.

The new collection, which will be available in stores in the fourth quarter, will be geared to the fashion-forward tween, sizes 7 to 16. The line — which features sportswear, jeanswear and activewear — will interpret key styles and silhouettes from the juniors line, while focusing on Simpson’s girly, playful attitude. The tween line includes denim jeans (skinnys, boot cut, flares, colored jeans and shorts with leggings), knit tops, hoodies, pullovers, striped shrunken knits, graphic T-shirts and drawstring pants. The Simpson sisters will serve as co-creative directors for the line. This marks their first fashion collaboration.

“Creating a tween apparel collection was a natural extension for the brand. I’m excited to bring my sister, Ashlee, along as co-creative director of this division, because she brings a savvy rocker edge that defines today’s tweens,” said Jessica Simpson.

Ashlee Simpson added, “My goal as co-creative director will be to design clothes that will help inspire young girls to express their personalities and creativity through fashion.”

According to Camuto, the tween offering will include footwear (licensed to Stride Rite) and outerwear (licensed to Fleet Street), in addition to the sportswear, jeanswear and activewear. The sportswear line will be available at about 400 doors of specialty and department stores in the fourth quarter. The company has already lined up orders with Dillard’s, Lord & Taylor, Macy’s, Belk, Von Maur, Bon-Ton and The Bay in Canada. Wholesale prices are $15.50 for core jeans; $15.75 to $18.25 for fashion bottoms; $8.50 for graphic Ts; $10.75 to $14.75 for fashion knits, and $14.75 to $20.75 for sweaters, fur vests and pleather jackets.

Jones launched Simpson’s jeanswear collection last June (650 doors), and will introduce sportswear at retail this fall (450 doors). Jack Gross, chief executive officer of the Jones Jeanswear Group, projected sportswear and jeanswear combined to ring up $150 million to $200 million at retail annually by next year, evenly split between the two categories. Down the road, sportswear is forecast to outpace jeanswear. The tween line is expected to generate $20 million in retail sales in 2012, said Gross.

Overall, all products bearing the Jessica Simpson name are expected to rack up $1 billion in retail sales by the end of 2012.

Gross noted that Jones has been in the tween business with such lines as Energie, Glo and LEI. The Jessica Simpson tween line “will be a take down from the junior customer.” He expects Simpson’s tween line to compete with such resources as Calvin Klein, Guess, Polo and DKNY. However, he thinks Simpson’s line will have a more fashion-forward element and will complement the existing resources in the department.

The Simpson tween departments will have special fixturing and point-of-sale displays, and Ashlee and Jessica plan to make appearances. “They both get along so well and play off each other. They’ve very involved in every aspect, and take a lot of pride in their brand,” said Gross of the sisters.

Vince Camuto, founder and ceo of the Camuto Group, said, “We have strategically nurtured the Jessica Simpson Collection from its inception and have seen the need for expansion into the tween market cross-category.”