Josh Luber and the Rise of StockX

Josh Luber, ceo and cofounder of StockX, from Hypebeast and PwC's streetwear report.

StockX mirrors a traditional stock market, showing the real-time trade value of products, which at the time of launch was exclusively sneakers. The platform helped simplify sneaker resale and trading through transparency, sharing the asking prices and sale price trends of coveted sneakers, limited-edition drops, and styles available at retail. It also aided the growth of the sneaker community through its authentication service that validated real and authentic sneakers and the growing online resale market, which is being touted as one of the solutions for sustainability.

In 2017, the online marketplace launched watches and handbags, as well as a streetwear vertical that included brands such as Supreme and Fear of God, figures by Kaws and skate decks. StockX took its experience offline, opening drop-off centers in New York City, Los Angeles and London. This year, the company launched a collectibles vertical that included toys, pieces by Takashi Murakami, and rookie trading cards of Michael Jordan, Tom Brady and Kevin Durant.

But the company’s defining moment was the closing of its Series C funding round for $110 million in June, which increased its valuation to $1 billion. This moment not only legitimized sneakers and streetwear in the eyes of executives who may not have understood the allure and appeal of a graphic T-shirt or a pair of kicks, but has set a course for Luber to change the way products are generally bought and sold. The company’s growth — and increasing valuation — are the reasons StockX is receiving the WWD Honor for Best-Performing Retailer – Small Cap. 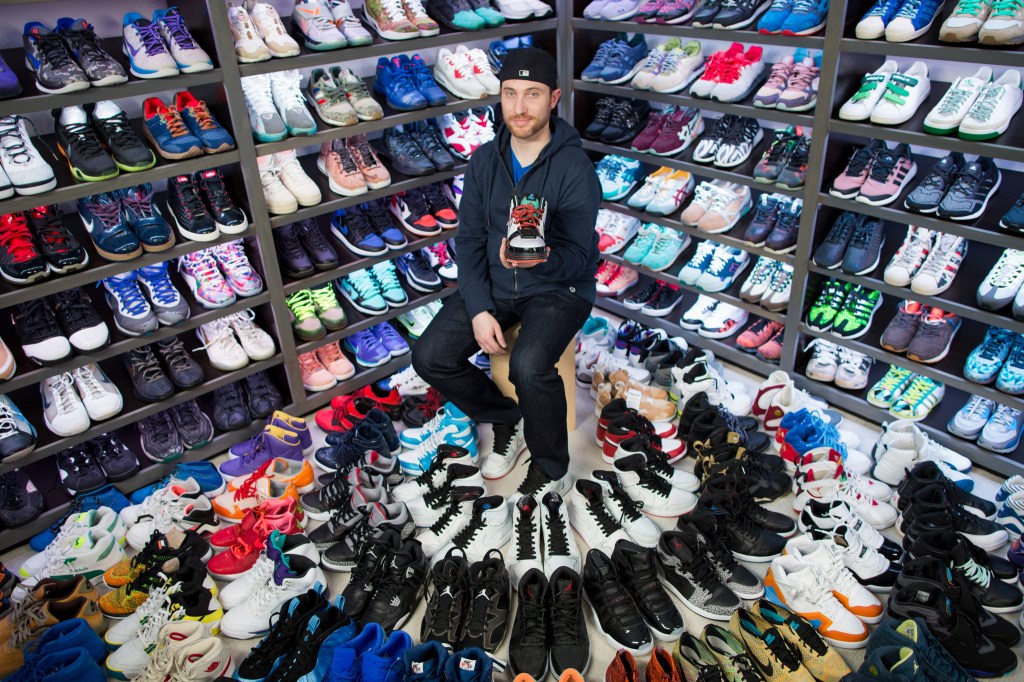 Josh Luber, founder of StockX, with his sneaker collection.  Courtesy

Luber is an entrepreneur by every definition. He describes himself as a start-up guy. The Philadelphia native attended business school at Emory University and finished with a joint JD/MBA degree. He cofounded three companies, including web start-up Servinity to help businesses with employment and management and help people find jobs. A year later, he joined IBM as a strategy consultant in New York City. He is also a typical sneakerhead.

“I have the exact same story as every 41-year-old sneakerhead,” he said. “I grew up playing ball when [Michael] Jordan played and my mom didn’t want to buy me Jordans.” The first pair of Jordan sneakers he owned was the Air Jordan XI ‘Concord’ from 2000, and today his full sneaker collection spans 400 pairs from Nike and Jordan among other brands.

In 2012, he started Campless as a hobby. Campless captured real-time data of the sneaker resale marketplace, using eBay and Flight Club as the primary data sources and has been described as the Kelley Blue Book for sneakers. It can also be seen as the precursor of StockX.

Campless’ model should sound familiar since StockX uses data similar to what was found on Campless (the platform was acquired by Dan Gilbert in 2015), and has made resale data and transparency some of its main selling points, in addition to its authentication service, and a differentiator to other resale sneaker apps, consignment shops and online stores.

“If you were into sneakers, you knew consignment was overpriced so that led to the question of analysis,” said Luber. “It was just hard to figure out what products were actually worth.”

But unlike Campless, StockX allows for users to put the data to use also in real time and in one place. “What’s really interesting is how many people have built businesses on the backs of Campless and StockX,” he said.

“One of the best stories is from when StockX started to get traction. I got an e-mail from a father who said, ‘I have a 17-year-old son who I thought was selling drugs but was selling sneakers, and I joined it to sell sneakers with him.’”

Luber’s affinity for sneakers stems from his innate love of collecting, and his hustler mind-set dates back to his youth when he would sell candy in middle school. When Luber met his good friend and entrepreneur Gary Vaynerchuk, he was asked by Vaynerchuk, “candy or baseball cards?” For Luber, the answer was both.

“Part of it is, I’ve always been a collector, whether it was sneakers, baseball cards, hats and even toys. Inherently, a lot of young kids are able to fund their sneaker collections,” he said.

Ironically, Luber helped sneaker traders and resellers build million-dollar businesses, but he very rarely sold his own sneakers. “I never sold sneakers as a business the way these kids are today. I was more of a buyer than a seller.” But his natural inquisitiveness and search for a product’s true value inspired Campless and ultimately led him to Gilbert in 2015. “Dan had the same idea and built a team led by Greg,” he said. 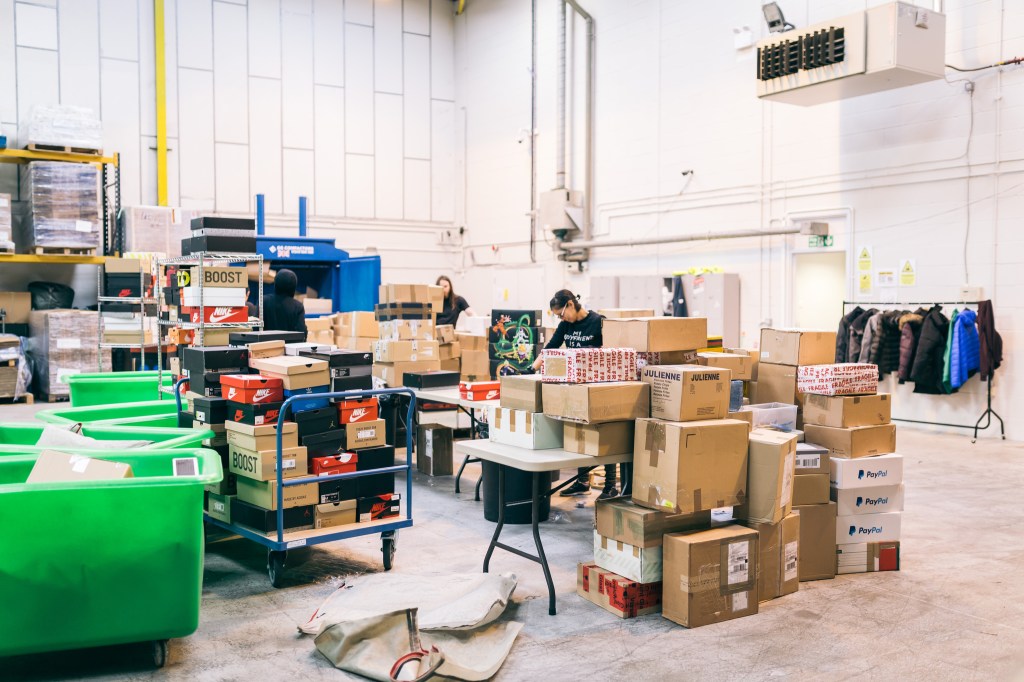 StockX may have launched with sneakers but Luber’s focus was always the model itself and not quite the sneaker resale market. “It was about the bigger idea, which we didn’t make up. The hypothesis was pretty sound that this is the best way to buy or sell products and it was on us to execute that. That’s why it’s called StockX and not ‘SneakersX’,” he said.

The true market value of products applies to anything that can be bought, sold or traded. The barter system today is centered on labor and currency instead of the archaic system of trading labor and physical goods. Ownership increases the value of products, as seen in the art world, with watch collecting and in the sneaker world with player-exclusive colorways of sneakers or some of the rarer items on the market. StockX tracks the market value of products through past sales to give sellers an idea of how much their item is worth and ensure buyers are receiving the fairest offer.

“The concept of fair never crossed someone’s mind when buying a share of stock, and that’s what we’re doing for commerce. Working with brands to IPO products into existence, that’s the future of it and we’re scratching the surface of it,” Luber said about the future of StockX.

The company launched its first initial product offering with Kareem “Biggs” Burke in 2016 for the 20th anniversary of “Reasonable Doubt,” Jay-Z and Roc-A-Fella Records’ platinum debut album. StockX users bid on the product package in a blind Dutch auction, meaning that the highest bidders receive the product, and the winners can opt to take ownership of the product or resell it on StockX without taking physical ownership.

Other IPOs included the Cavs Championship Court offering that included the Cleveland Cavaliers 2016 NBA Championship ring, the Air Zoom Generation ‘First Game’ or LeBron 14 ‘Out of Nowhere’ sneakers and a commemorative sneaker box made from the hardwood of the Cavs basketball court from the 2015-2016 championship season, and the “Ben Baller Did the Chain” IPO that Luber spoke at length about at the WWD Digital Forum to illustrate how StockX is changing the market.

He said that the Ben Baller Did the Chain slides, in the traditional wholesale model, would’ve sold in limited quantities for $70 and would hit the secondary market with a $350 price tag. Through the blind Dutch auction model, the average clearing price for the slides was $210.

“Ninety-seven percent got it for less than what their bid was, got it less for what they were willing to pay, and still got it for $140 less than what the actual market was,” he said at the Digital Forum. “It went into the market greater than retail price, but less than the true market price.

“All we did was copy the stock market,” he explained. “The stock market has been a pretty efficient form of commerce for a really long time. And all we did was apply it from old commodities like stocks, bonds, oil and gas to new commodities like sneakers and streetwear and watches and handbags. I think 18 months, 24 months from now it’s just every Monday here’s the 20 products that are IPO on StockX and we’re just the platform to allow that to happen.”

In October, Adidas became the first footwear company to partner with StockX on this product format for its MakerLab experiment. The German sportswear company tapped three designers — Helen Kirkum, Alex Nash and Shun Hirose — to redesign the Adidas Campus 80 silhouette, and the finished results were produced in limited quantities and sold through an IPO.

According to Adidas, the IPO received nearly 10,000 combined bids from almost 7,000 different bidders, and the average overall clearing price from each Campus 80 sneaker was $205.

“It’s easier to sell a share of Nike stock than it is to be able to sell anything on eBay or Amazon or anywhere else in our e-commerce ecosystem.

“This is natural evolution,” Luber said at the Digital Forum. “You have a marketplace that’s actually built on supply and demand, where people understand that and where you have full transparency. In all of these scenarios, if you do it right, if you choose the products that are truly supply-and-demand constrained and go out there, the brands should actually make more money. Eighty percent of the market price is going to be way more than 50 percent of a wholesale, retail relationship.”

StockX’s billion-dollar valuation arguably helped make this partnership a reality. Luber said that the valuation helped the company with additional recruiting — it recently hired its 1,000th employee — and opportunities. His focus now is the game-changing IPO model that can hit the reset button on the marketplace and the way products are bought and sold today.

In hindsight, the journey all started with basic economic principles found in sneaker trading and selling candy.