Becoming the retailer's president after tackling top jobs at Jimmy Choo and the Gucci Group is not such a stretch. 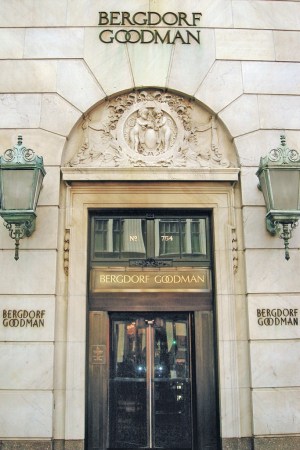 NEW YORK — For Joshua Schulman, becoming president of Bergdorf Goodman after tackling top jobs at Jimmy Choo and the Gucci Group is not such a stretch.

Schulman, formerly Jimmy Choo’s chief executive officer and earlier, executive vice president at the Gucci Group, was already on the scene at Bergdorf’s on Wednesday, even though he doesn’t officially start until May 7. “My first order of business at Bergdorf’s is really to get to know the team and the business,” he said. “Although I’ve been a vendor, I’m not coming in with any preconceived notions. I will be working on a new strategic plan.”

“Josh has been around the luxury business for 20 years and although he has been on the wholesale side, he has worked with department stores his whole career and gained an intimate knowledge of what it takes for a large store to work,” said Jim Gold, president of specialty retail for the Neiman Marcus Group, which operates Bergdorf’s.

Domenico De Sole, former chairman of Tom Ford International and former president and ceo of Gucci Group, described Schulman as “a very capable and intelligent merchant who has proven to be a strong ceo. He understands luxury. He expanded ladies ready-to-wear at Gucci and then at Yves Saint Laurent did an excellent job. He’s a very thoughtful boss and always promoting his own people” and prone to crediting his team. “He says ‘we’ not ‘I,’” De Sole noted.

At Bergdorf’s, Schulman will report to Gold, who two years ago was president of Bergdorf’s until being promoted to his current position in Dallas. The Bergdorf’s presidency has been vacant since, though Gold has been supervising the store from Dallas. With Schulman’s appointment, Bergdorf’s reverts to its prior management structure, which NMG has now learned is better for business. The switch back also raises questions about what’s on tap for Bergdorf’s.

Through its main women’s store and the men’s wear annex, which are on opposite sides of Fifth Avenue between 57th and 58th Streets, as well as through its Web site, Bergdorf’s currently generates about $600 million in annual volume. That’s comparable to the revenues generated by the Saks Fifth Avenue and Bloomingdale’s New York flagships, which have far greater square footage and generally less expensive merchandise.

Given Bergdorf’s already impressive productivity, it’s always challenging to bring it to the next level of growth, though the team has been aggressive in social media, omni-channel programs, enhancing in-store designer presentations and special events. It’s cooking up a big celebration for its 111th anniversary this fall.

There’s added pressure to grow Bergdorf’s given NMG’s intentions to go public soon, possibly this year. NMG in 2005 was purchased by Texas Pacific Group and Warburg Pincus for more than $5 billion, and the owners want some payback. This year, NMG has taken some moves suggesting the IPO is nearing, including declaring a one-time cash dividend of $442.6 million, or $435 a common share. A willingness to pay dividends makes NMG more attractive to potential investors.

Neiman’s also revealed an investment of $28 million in Glamour Sales Holding, a privately held e-commerce business in China. The retailer intends to use Glamour’s technology to launch its own Web site in China at the end of this year and pump up Glamour’s existing flash-sale business. It’s an attempt to demonstrate that Neiman’s has growth potential, at least internationally. While there is little room left in the U.S. to open more Neiman Marcus full-line luxury stores, the company has been accelerating growth of its outlet and e-commerce businesses.

In 1972, Bergdorf’s did open a branch in White Plains, N.Y., which was not successful and was converted to a Neiman Marcus store. Prior to the recession, the company reconsidered opening an additional Bergdorf’s, and eyed Las Vegas.

Asked if Bergdorf’s branches were again on the table for discussion, Gold replied: “There are no plans to do so but Josh is going to have the opportunity to study the business and formulate a strategy in partnership with me and Karen Katz,” ceo of NMG.

The hiring of Schulman could be read as another sign that the company is positioning itself to go public, since investors like to see strong management teams. Gold would not comment on the possibility of going public but did say, “Organizations are very fragile. It doesn’t take much to destabilize a business.” Recruiting Schulman “fortifies” the team and “adds a lot of value to this brand. We are focused for now on doing everything we can do to make this business as strong as it can be.”

Gold also explained why NMG decided to reinstitute the president’s post at Bergdorf’s. “When I became president of specialty retail, I assumed responsibility for both Neiman Marcus and Bergdorf Goodman. I relocated to Dallas and left behind a very talented, very tenured senior team to run the day-to-day operations at Bergdorf Goodman and there were advantages to having me over both. We opened lines of communication between both divisions and shared best practices.

“But as time progressed it became apparent that this is a very large organization that needed a leader that can be on the ground, day-in, day-out and not just come to town on a monthly basis. In order to sustain our growth and take the business to the next level we felt we needed someone based in New York to pay much closer attention to the business and have the time to think very strategically about the next steps for the brand. Even though it’s one store, it’s a very complex business. There is a lot that needs to be coordinated. Having one point person to coordinate all of the activities is very important.”

“There really is a dream team in place here,” said Schulman, who said he didn’t anticipate any sweeping management changes at Bergdorf’s. “What is particularly interesting now is how Karen and Jim are really carriers of Neiman’s legacy, culture and heritage and yet they are taking the company forward, thinking in a modern way” about technology, being omni-channel and customer service. “There’s this strong connection to the past but also this focus on the future.”

Asked if it was a stretch to go from running Jimmy Choo to running Bergdorf’s, the 40-year-old Schulman replied: “I would say they are very different roles. As ceo of Jimmy Choo, the business went from 55 stores in 2007 in 15 countries to 140 stores in 32 countries by the end of 2011. We diversified the brand by adding new categories like fragrance, men’s shoes and eyewear. I was involved in product development, managing the design process, managing the retail and wholesale businesses and being ultimately responsible for the financial side of the business. There was a very international scope. It was a very different role than being president of Bergdorf Goodman, but I would argue that there is a similar degree of complexity.”