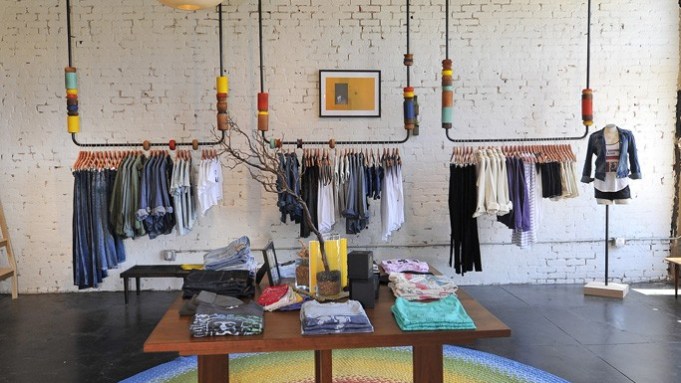 Opened on Abbot Kinney Boulevard in Los Angeles’ Venice neighborhood over the weekend, the 2,500-square-foot space displays Junk Food’s knits printed with licensed and original graphics in what comes across as a midcentury modern beach hut decorated by Etsy. In the front room, candylike globe lights made for the 1904 World’s Fair hang from exposed rafters, metal pipes functioning as clothing racks are looped with big bright beads and a 10-foot-wide rug is woven from Junk Food T-shirts that were dyed every color of the rainbow. Local craftsmen commissioned by store designer Danny Gonzales customized weather-beaten signs and carved a cash register out of mahogany and white marble. In the back, a green couch and Fifties-era hoop chairs restrung with climber’s rope demarcate a living room, where customers can lounge and participate in weekend activities, like children’s art classes.

“We like the idea of this place where people go beyond buying a T,” said Junk Food creative director Mike Palermo.

Also elevating Junk Food beyond its knits that retail from $30 to $70 are wares for the home and bathroom and apparel for men, women and children from other brands. In addition to jeans from Tellason, Genetic Denim, McGuire and Joe’s Jeans that complete the laid-back look, the store also carries Baggu leather totes, Malin + Goetz soap, Hortense jewelry and vintage clothing. A 200-square-foot eyewear shop-in-shop for Classic Specs is a harbinger of future retail partnerships.

“It’ll bring the whole aspirational beach lifestyle to life,” said Junk Food president Jennifer Somer. “To not have that [other merchandise] in the store is a huge miss for the customer and the whole brand experience.”

The opening of Junk Food’s store accelerates the fashion industry’s takeover of Abbot Kinney, whose split between high-end sophistication and relaxed casualwear represents the rapid gentrification transforming the mellow neighborhood located just a mile away from Venice Beach. While Junk Food falls into the casual camp with knit-centric neighbors such as Aviator Nation and Alternative Apparel, LFrank Jewelry posts a security guard on the sidewalk to protect its diamond and sapphire-encrusted baubles. Gant, Jack Spade and Kendall Conrad sit in between as contemporary options on the strip, whereas Caudalie and Le Labo help beautify locals.

As a result of the fashion influx, retail rents on Abbot Kinney have surged. Yearly rents run between $108 and $168 a square foot, or more than triple from $30 a square foot a decade ago, according to Blatteis & Schnur Inc. and LoopNet.

Junk Food expects annual sales for the store to range between $700 and $1,000 a square foot. Moreover, the brand’s executives and neighbors are buzzing about the arrival of Rag & Bone, which is securing a 4,200-square-foot space, accentuated with a brick archway, skylights and bow truss ceiling, across the street. New York-based Rag & Bone declined to comment.

Junk Food’s debut in direct-to-consumer retailing can help offset declining wholesale revenue for its parent company, Delta Apparel Inc. of Greenville, S.C., which posted $490.5 million in sales in its last fiscal year. In its second fiscal quarter that ended March 29, Delta said sales of Junk Food products fell 3 percent due to “softness at larger retail customers.” Along with Salt Life, Art Gun, Soffe and The Game, Culver City, Calif.-based Junk Food is part of Delta’s branded division, which reported that second-quarter sales fell 4.6 percent to $50.3 million from $52.6 million a year ago. In the past year, Junk Food more than doubled the positions in its retail and e-commerce department, which now includes five out of its total 120 employees.

Junk Food is also launching subbrands to complement its massive licensing business. Retailing from $58 to $176, Stray Heart landed in boutiques this spring with women’s Ts and tank tops bearing phrases such as “drop out” and “fashionably late.” For men, K38, named after a secret surf spot in Baja, Mexico, is offering T-shirts printed with the names of wave-riding destinations, like “Pt. Dume” and “San O.” The store is the only place that will sell K38, which retails from $49 to $69, before the line expands to Beams in Japan in the fall.

“This is really the time when we’re taking the brand to the next level,” Somer said.