Norma Kamali has hit the accelerator on her year-old business, where everything in the line retails for under $100. 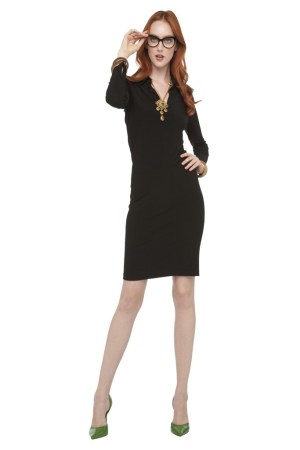 NEW YORK — Norma Kamali has hit the accelerator on her year-old business, KamaliKulture, where everything in the line retails for under $100.

The line was inspired by Kamali’s three-year agreement designing Norma Kamali for Wal-Mart, which was both an in-store and Internet venture, that ended in spring 2011.

“It came about from my fantastic experience with Wal-Mart,” said Kamali, chief executive officer, in an interview at her West 56th Street headquarters here. “I wanted to do it myself and saw the e-commerce potential. I wanted to add another level of sophistication.”

KamaliKulture includes sportswear, suitings, dresses, swimwear, footwear and eyewear, all with a modern point of view. The line is sold to such accounts as nordstrom.com, kohls.com, Zappos.com, Amazon.com and Opening Ceremony in New York, Los Angeles, London and Tokyo, as well as kamalikulture.com.

KamaliKulture expects to generate $10 million in sales this year, said the designer.

To handle the fast growth, Kamali is beefing up management. She recently tapped Thomas Matthews as president of the brand. Earlier in his career, he was at Saks Fifth Avenue as group senior vice president, corporate administration/chief ethics and compliance officer. She also hired Christine Talevski as vice president of sales, effective April 10. Most recently Talevski had her own consulting firm in business development and merchandising, having previously been global vice president of Phi.

“We’re looking at expanding the categories. We’re talking about licensing and shapewear, as well as athletic sportswear. We’re looking at a strategic plan and want to take it global,” said Kamali.

“It’s not fast fashion. It’s timeless style, but it’s a great value. The e-commerce opportunities are everywhere,” she said.

The collection is manufactured in such places as China and Guatemala, often in the same factories that Kamali used for her Wal-Mart line. The clothes are easy care, can be rolled up to travel and are machine washable. The collection runs the gamut from $25 long-sleeve crewneck T-shirts and $40 trenchcoats to $96 long-sleeve sweetheart draped dresses and $98 halter swimsuits with shirring in the front. The line also contains classic suiting, such as a navy blue pinstripe suit with a skirt for $44, a pant for $50 and a jacket for $78. Fabrics include polyester and Lycra spandex; nylon and Lycra; polyester, and rayon and spandex.

There are a variety of styles in each category. The jersey dresses include color-blocked sheath styles; striped maxidresses; sleeveless shirred-waist dresses and animal faux wrap designs, all under $100. Some of the dress designs are fairly basic but look good on people, said Kamali. “It’s for people who have style and can play with it, and for people who don’t have a clue and they put it on, and they can’t go wrong. They’re not so much basic, but they are timeless.” Sizes range from 0 to 18.

Kamali, who continues to design her OMO designer collection, loves the fact that KamaliKulture is so affordable.

“Women want to be smart when they shop,” she said, adding that they like to do the high-low thing with their wardrobes. Kamali believes that women today have become very price conscious. “For the next 25 years, people will be thinking about how they’re spending their money. It’ll take a long time before people feel there’s no limit to what they spend, or maybe never again,” she said.

Kamali said she learned a great deal from her experience working with Wal-Mart. “They’re really good factories. It’s the design and how you construct it. We focus on our fabrications and we build a relationship with them [the factories]. Wal-Mart factories are great factories. They make clothing for high-end and contemporary designers, too,” she explained.

KamaliKulture is being used as a platform for Kamali’s campaign to empower women and help them overcome self-esteem issues and to bring awareness to the negative long-term impact of objectification. She is offering a necklace designed with a silver long chain and dog tags that have sayings imprinted on them for empowerment and awareness. She is also launching eight fragrances with empowerment statements on the bottles. These are designed as a way to begin the conversation about women’s self-esteem issues.

Kamali hosted an event at J.P. Morgan Wednesday, where she showed a short film of five women’s stories of objectification in the workplace, followed by a panel discussion.