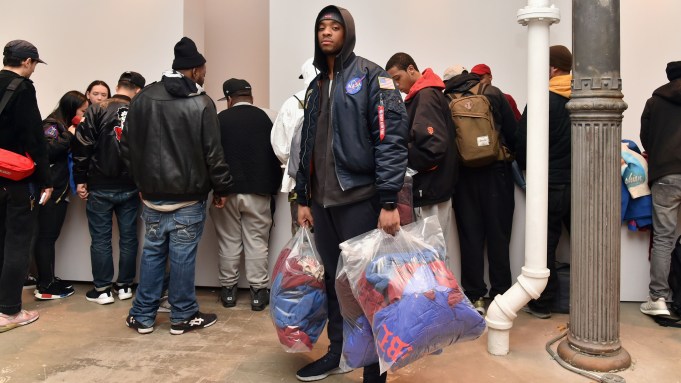 On Friday, the rapper and designer opened a pop-up shop of album merchandise tied to his new album at 83 Wooster Street in SoHo here, which was set to run through the weekend.

The seemingly impromptu retail venture was revealed on West’s Twitter feed late Thursday afternoon without much ceremony or articulated fuss. But as the crowds assembled on Friday proved, additional marketing efforts were hardly necessary.

A crowd of hundreds stretched down both sides of Wooster Street’s sidewalks, barricaded by a heavy New York Police Department presence. Some fans had been there since 4:30 p.m. on Thursday.

An exclusive preview of the space showed the pop-up was a study in West’s signature purposefully industrialized minimalism: clean, white walls and clothing racks fashioned from copper piping, accented by a video projection of various explosives mid-furl. The space had long served as a flagship for chandelier and percale purveyor Shabby Chic, whose wrap-around floral wainscoting still remained, ensconcing the room’s casual merchandise in an odd, if charming, dichotomy.

The T-shirts, bomber jackets and sweatshirts available were an expanded offering of the merchandise sold at West’s Yeezy Season 3 presentation and “The Life of Pablo” listening event at Madison Square Garden on Feb. 11.

Designed in a collaboration between Los Angeles-based graphic artist Cali Thornhill DeWitt and West’s band of creative cognoscenti DONDA, the wares adhered to two colorways — fabricated in burgundy or cobalt, both with red gothic lettering. New pieces included screen printed vintage Levi’s denim jackets. Prices ranged from $35 for a beanie; $45 to $65 for a T-shirt; $95 for a hoodie, and $150 to $400 for jackets.

“It’s a collection,” a New York-based fan named Chris said of the wares, applying a word that’s more typically reserved for the runway-to-retailer model rather than West’s version of concert Ts.

To avert a retail riot — or perhaps to simply maintain the sleek aesthetic — said clothing racks were mounted purely for exhibition. Shoppers were directed to a staffed counterfront, and chose their purchases from a laminated poster card of merchandise indicating their prices. All of the clothes for purchase were neatly tucked away behind a walled-in stockroom.

But once inside, they nonchalantly strolled to said counter, barely noticing the well-documented members of West’s inner circle who were standing around monitoring the mayhem. These shoppers weren’t here to dally — for many, the afternoon was a business proposition.

The aforementioned Chris had been in line with his “workers” since 6 a.m. He individually spent $715 on “The Life of Pablo” merch, and when pooled with the clothes purchased by his staff, he planned to make triple return on his initial investment by reselling on eBay. According to him, West-affiliated products maintain their value: the clothes he purchased to resell at the Feb. 11 MSG event yielded a similar profit.

“I’m a Kanye West fan — he changed the game. But I’m a businessman, too,” he said of his efforts.

Not all of the day’s shoppers were as calculating, though — or so they said. A fan named Jamal, who had arrived in SoHo to line up at 10 p.m. the night before, spent $1,000 on merchandise for himself and his friends.

“The Ts were thinner than I thought they should be, but I am really into the bombers,” he said.

Their purchases complete, Big Rob began to circulate other shoppers into the space. Upon exiting, WWD observed an even larger crowd that had assembled since New York City’s schools had let out for the day.

A trio of 14-year-old co-eds from Xavier High School gawked from the sidewalk’s edge, having traipsed over from Adidas’ SoHo store where they bought new sneakers. “We wanted to come and see if we could buy overpriced clothes designed by Kanye West,” said the group’s surly member named Carry. “I’m not going to wait — it would take like 24 hours to get in and everyone is here to eBay anyway.”

As many-a-dating adage goes, the more elusive you behave, the more intriguing you become. Here were crowds lining up to snap up merchandise for an album that isn’t even available to buy — although one can hear it on the streaming service Tidal.