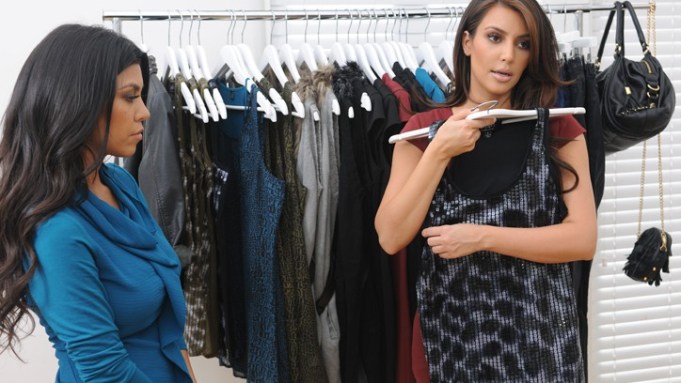 LOS ANGELES — Forget about keeping up with the Kardashians — try catching them in the first place.

Attempting to link up with the Triple K sisters to talk about their new fashion line with QVC is like trying to hold quicksilver — there one moment and gone the next. After six weeks of wrangling among a QVC publicist, two outside agency publicists, the Kardashians’ Hollywood publicist and their manager-mom, Kris Jenner, what was initially confirmed as an all-in-the-family fashion shoot was, in the end, reduced to 90 minutes in QVC’s showroom here with Kim and Kourtney (but no Khloe).

In the hyper-hyped World of All Things Kardashian All the Time, even two Ks are sold as a major “get,” since apparently the sisters are rarely in the same city at the same time, despite what one sees on TV. Makes one wonder how they film the E network show.

Admittedly, the Kardashians are taking their 15 minutes of fame and stretching it as far as it possibly can go without snapping, so they’re one busy fam. There’s the QVC line K-Dash, which will make its debut in a runway show Sept. 10 at the TV retailer’s pop-up store in New York’s Rockefeller Center as part of Fashion’s Night Out; the sisters’ collection with Bebe; the debut next year of the trio’s line with Jupi Corp.; their clothing stores, and Kim’s burgeoning empire, which includes a fragrance and a costume jewelry collection. And then there’s the TV show, “Keeping Up With the Kardashians,” the fifth season of which kicked off two weeks ago and attracted a record E network audience of 4.7 million viewers.

It’s these numbers — and the Kardashians’ famed curves — that no doubt attracted QVC to do a deal with Kim, Kourtney and Khloe. They aren’t really designing the line — that’s left to a real designer, Ginny Hilfiger, sister of Tommy — but are said to approve every fabric and every piece.

The collection of contemporary sportswear and handbags initially will have 31 styles and retail prices running from $19.50 for a fake leather wrap belt to $49.50 for denim leggings to $239 for a pebble leather handbag enhanced with braiding along the seams. After the Sept. 10 debut with the Kardashians and mother Kris, the sisters will take turns making two additional appearances in September and October.

The multiyear deal is the latest effort of the fashion-loving sisters to broaden their sartorial sensibility beyond the party-glam dresses they’ve designed with Bebe.

“[QVC] reaches a different audience than we’re used to,” said Kim, as she inspected K-Dash’s belted knit vest trimmed in fake fur at QVC’s showroom. “We always welcome that.”

And never one to pass up an audience, the prospect of broadcasting to the 98 million U.S. households within QVC’s network appeals to Kourtney.

“It’s a great way to interact,” she said, looping a vintage Chanel chain-link belt around an animal-print tunic from the line. “You get to put your opinions behind everything you do.”

Anyone who’s watched even a snippet of “Keeping Up With the Kardashians” is familiar with how loudly opinionated the Kardashians can be. The challenge for QVC was editing the three sisters’ distinct styles. Curvy Kim gravitates toward trendy items, while statuesque Khloe prefers classics and Kourtney, mother to an eight-month-old son, likes to mix vintage finds into her wardrobe.

“Each one of them has their own idea, but they all have great style and it blends together well,” said Ginny Hilfiger, design director of sportswear at Tiger J, the New York-based manufacturer that is producing the apparel and accessories for K-Dash.

Hilfiger said K-Dash will reflect a variety of looks, ranging from glam and edgy to feminine and flirty. No stranger to celebrity herself, Hilfiger said she had different opportunities to research her subjects.

“Every time you go to [drug store] Duane Reade, their picture is on every cover of every magazine,” Hilfiger said. “I’m standing in Duane Reade researching the people I’m designing for.”

Mark Locks, Tiger J’s global president, said the creative process started in February. Each woman selected her wardrobe favorites and showed them to Tiger J, which then reworked the items to start at size XXS, the equivalent of a size 2, and run up to 3X, which is equal to size 26. Tiger J sent three fabric swatches to the sisters, who picked the one they liked the best to be used for the samples, which, in turn, they approved.

“If one of us doesn’t like it, it’s gone,” Kourtney said. “You want it to be the best of the best. We all have to love everything.”

The sisters unanimously wanted to include thick leggings and blazers in the line. They were also on the same page when it came to the palette. Disdaining bright colors, they leaned toward neutral hues such as black, brown, gray and blush pink. Hilfiger and her team spiced up the spectrum with teal and burgundy.

To accommodate the Kardashians’ famed curves, the denim, cotton, polyester and ponte knit are stretchy. The sole print is a mix of leopard and snake skins. But Hilfiger limited the use of real skins, out of consideration for Khloe, an activist for People for the Ethical Treatment of Animals, who has vowed not to sell the real leather bags when she appears on QVC.

“Everything works really nicely together because the palette is tight and cohesive and sophisticated,” Hilfiger said. “The items we’re putting into the collection are items that are versatile enough that you can wear [them] anywhere in the country and anywhere in the world.”

Yet K-Dash is unlikely to be the Kardashians’ last fashion venture — it’s simply the latest. Earlier this year, Kim released a namesake perfume, which was sold at Sephora and QVC, among other retailers. She also is collaborating on another costume jewelry line with Pascal Mouawad, dubbed Belle Noel and separated into four series (Honey Hexagons, Glamrock, Gold Clusters and Peek-a-Boo). The collection consists of 75 pieces priced from $11 to $150 and is made of base metal, Lucite enamel, resin gold and crystal. Kim said she tapped into inspiration “from classic movie stars such as Carole Lombard, Vivien Leigh and Sophia Loren,” as well as “fashion muses of the Seventies, like Lauren Hutton and Julie Christie.”

The line will be sold in department stores, specialty stores and online beginning in January. Mouawad already has collaborated with Kim on a costume jewelry line for holiday 2010, to be sold exclusively at Bebe.

In addition to Kim’s ventures, the three sisters own two women’s clothing boutiques, both called Dash, in Calabasas, Calif., and Miami, and plan to open a fan-centric shop in Las Vegas. Their fashion line with Bebe retails through resort 2011. Next year marks the debut of ready-to-wear, accessories, lingerie, swim and shoes produced with Australian designer Bruno Schiavi’s Jupi Corp.

In contrast to K-Dash, Kim explained, “Jupi is going to be more of a lifestyle brand.” She didn’t say what kind of lifestyle, though.

“I used to always dress up or wear sweats,” she added. “I never had that in-between outfit [like K-Dash].”

“It’s great basics for your closet, but with a fashion twist,” Kourtney added.

Besides, Kim said, “who else hasn’t been up at 2 in the morning and you can’t sleep and shop QVC?”

Or watching reruns of “Keeping Up With the Kardashians.”