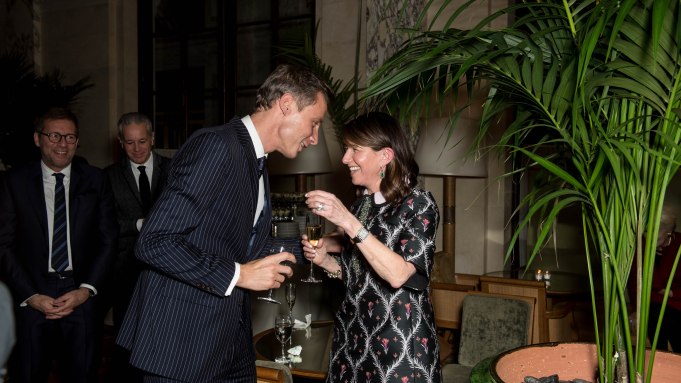 Retiring is tough, especially the saying good-bye part. Yet Karen Katz, the departing chief executive officer of the Neiman Marcus Group, made it through four retirement parties last week, in Dallas and New York, to bid farewell to all her constituencies.

“I’m not one to ever spotlight myself,” Katz said on Friday at the retirement party held in the swanky Palm Court of The Plaza in Manhattan. She officially retires as Neiman’s ceo on Sunday, though she will remain on the board.

“When I became assistant manager of a small Neiman’s store in Houston, I just turned 28. All I wanted to be was a divisional merchandise manager. Being a ceo was never a lifelong dream. It’s been a journey beyond my wildest dreams,” she said.

For the most part, Katz maintained her chipper demeanor at the party, referencing her successor, the Belgian-born Geoffroy van Raemdonck. “If you don’t miss me for anything else, you will miss me for my simple name,” she said.

She gave a quick critique of the industry, stressing the importance of speed of delivery, remaking the fashion show schedule and enhancing the appeal of luxury with more casual, unique and less widely distributed offerings. “I leave all of these challenges to my successor,” she said with a wide smile.

Van Raemdonck, who came to the event with his husband, the interior designer Alvise Orsini, said to a guest that he was “super humbled and honored to follow in Karen’s footsteps.…I’m excited to really bring Neiman Marcus to the next period of success. Neiman’s has a unique position and the right heritage and culture, where the customers come first.”

Others spotted in the crowd of designers, fashion executives, friends and colleagues were Joshua Schulman, Pier Guerci, Mallory Andrews, Rod Kosann and Monica Rich Kosann, David and Sybil Yurman, Josie Natori, Harry Slatkin, Lisa and Kendall Kazor, Jay Strongwater, John Galantic, Leonard Gorski, Massimo Caronna and Neva Hall, an executive vice president of Neiman’s stores, who has been with the company for 34 years — two more than Katz has been.

Several guests praised Katz for her people and business skills. “She does have that personalized touch,” said Brooke Lawson, the general manager of Neiman’s in Paramus, N.J. “As soon as I got the offer to manage the store, Karen welcomed me to my new job. That set the tone for the culture I would experience at Neiman Marcus for gracious service and creating that warm and welcoming environment.”

“Bergdorf Goodman was my first client. Neiman’s was my second,” said jewelry designer Stephen Dweck. “It’s been like family. Karen refereed over price points but she’s been like the sister I never had.”

After days and days of covering the European collections, “We would meet in Paris at the Ritz over breakfast at 7 a.m. Karen was the only one who was ever alert at that hour,” said Anna Wintour.

Designer Michael Aram recalled about 15 years ago when Katz visited his flagship on 18th Street in Manhattan, and saw his collection, she said two words: “premium brand.…It was like she dropped the mic and was out of there and before I knew it I received this massive order.”

“For me, she is truly a role model,” said Bergdorf Goodman’s Linda Fargo. “It’s no small feat, in any big corporation, for a woman to rise to the position she did.”

“It’s hard to understand from the outside what it takes to be a ceo,” said Neiman’s Jim Gold. “Neiman’s has 15,000 associates, over 1,000 vendors and millions of customers. They all need attention. So there is a reason why people who are ceo’s aren’t ceo’s forever.”