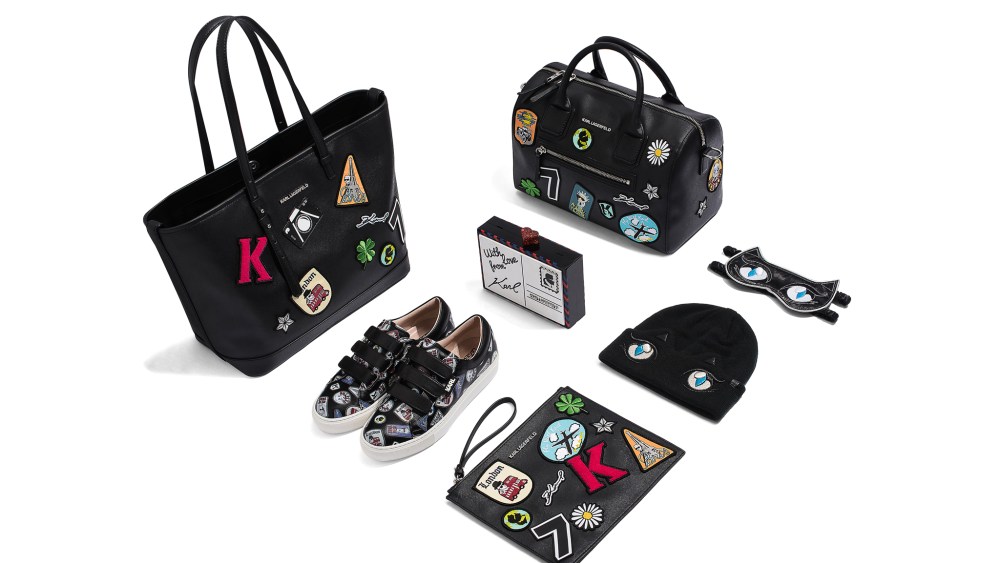 PARIS — Karl Lagerfeld is diving into e-commerce in his inimitable fashion: In multiple languages, in more countries than you’ve ever visited, and with a surprising launch partner: Artnet.com, which is to auction off three one-of-a-kind bags along with the original sketches by the German designer.

Timed for an early November launch, the e-commerce foray in partnership with Italy’s Yoox Net-a-porter Group is expected to quickly represent “a double-digit figure in terms of share of revenues,” said Righi, noting that online sales already represent “a significant part of the business.”

The Karl Lagerfeld brand relaunched in early 2012 in the burgeoning masstige category and with exclusive distribution of his rock-’n’-roll-tinged collection on Net-a-porter.com. Within the last 12 months, the company has expanded online, selling to sites including Luisaviaroma.com, Stylebop.com, Zalando.com and the Web stores of Harvey Nichols and Harrods.

The shop on karl.com is to house a far wider assortments of women’s products, including the entire accessories offering, up to three-quarters of the ready-to-wear range, plus licensed products including fragrances, watches, eyewear and novelty items. Men’s wear and children’s wear, launching for spring 2016, are not yet featured.

Disclosing details of the venture exclusively to WWD, Righi said the firm is capitalizing on high engagement on social media — with more than 1.6 million followers on Instagram amassed in the last two years — and healthy traffic to its Web site, in excess of 100,000 visitors a month.

Editorial features on the site, including witty remarks by the designer known as “Karlisms” and his favorite addresses in Paris, are to remain following a redesign.

According to the company, visitors spend on average more than three minutes on the site, and almost 40 percent went searching for a “buy” button — currently flagged as links to third-party retailers under its store-finder tag.

Righi said online shopping “resonates with our core customer, who is very connected, young-minded and modern….We know there is a big audience out there that wants to buy our product.”

Only a few consumers will score the limited-edition bags on Artnet.com, a site that sells works by Damien Hirst, Andy Warhol, Joan Miró – and Lagerfeld, logging 159 sales of the designer’s photography. The designer’s sketches are typically not available for sale, but he devised the auction scheme to mark the launch of the e-commerce platform.

The online Karl store is to unveil new designs every two weeks, and occasionally feature capsule collections developed especially for the channel, kicking off with a Karl Around the World range inspired by the designer’s travels. Looks include sweatshirts and sweatpants for long journeys, as well as accessories including cross-body bags, a nylon shopper, passport holder, sleeping mask and travel diary.

The Web venture comes in tandem with brick-and-mortar development, with a Düsseldorf women’s flagship the latest addition to the brand’s boutique network.

“It’s important that the brand stays tangible; that people can walk into the world of Karl Lagerfeld, touch it, sense it, physically engage with it,” Righi said.

Lagerfeld initiated its retail rollout in 2013 and initially focused mainly on Western Europe, particularly France and Germany. It counts about 20 directly operated stores and about 20 franchise locations, including eight locations in China and six in the Middle East. Righi reiterated that 100 stores remains a “realistic objective” for the brand in the coming years.