Hundreds mobbed the Herald Square flagship’s second-floor Impulse department on Tuesday night to see the designer and shop through the line. 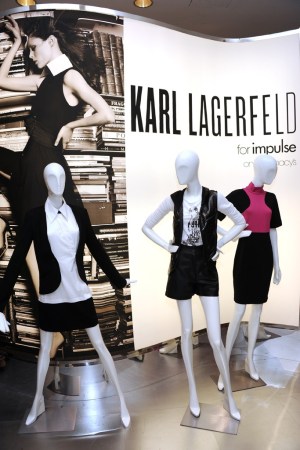 NEW YORK — “Who wants anything that is usual?”

This story first appeared in the September 8, 2011 issue of WWD. Subscribe Today.

Certainly not Karl Lagerfeld, which explains his latest tie-up — a capsule collection for Macy’s. And hundreds of others appear to agree with Lagerfeld’s decision, mobbing the Herald Square flagship’s second-floor Impulse department on Tuesday night to see the designer and shop through the line. He appeared humbled.

“It’s very flattering,” Lagerfeld said. “I was surprised at how much of the very young public was here.”

At the moment, it was difficult to take in the Macy’s ambience. “You cannot have an impression if you have people on every side screaming your name,” Lagerfeld said.

While Karl Lagerfeld at Macy’s might surprise some observers, he pointed out that he was the first to do H&M in a move that blazed a trail for major designers to do tie-ups with mass retailers. In addition, department stores are not foreign territory for him. “I know everything about American department stores,” he said. “European designers all landed in America through department stores. Jean Rosenberg [of Bendel’s fame], Philip Miller [who ran Saks Fifth Avenue and Marshall Field’s] — these were great retailers, great people. My name was made in America by department stores. I have a certain weakness for department stores.”

Lagerfeld said there was a certain “unreality” working with Macy’s this year to create the collection, but he did his thing, taking an approach that was anything but too focused on contemplating precisely what Macy’s customers might like or expect. “It’s better to have a vague idea than to have a precise knowledge. That involves marketing. I am not a marketer. They [Macy’s] used nearly all of my ideas, maybe I made 50 sketches, and they used nearly all, 45.

“I am very happy to play in a courtyard that you’re not used to be playing in, to not only play in the courtyard of high fashion. It’s unusual, yes. I am pleased that it’s that way. Who wants anything that is usual?”

His Macy’s sojourn, he said, albeit another move downmarket by a top-tier designer, won’t dilute his image or those of Chanel and Fendi that he designs. “This is not a problem whatsoever,” Lagerfeld said. “The more and more your name is around, it’s even better for Chanel. I am linked to that. I think this is the right moment for this. It’s pretentious to make only expensive things.”

Lagerfeld’s collection for Macy’s started selling four days ago at 225 doors and on macys.com, and officially launched Tuesday at Herald Square. He’s the latest in Macy’s ongoing guest designer series, which kicked off with Kinder Aggugini in February, followed by Matthew Williamson in April, and clearly crescendos with Lagerfeld for fall.

“We’re blown away by the sell-throughs with Karl. Even before his p.a. [public appearance], we did more than $1 million in sales,” said Terry Lundgren, Macy’s Inc. chairman, chief executive officer and president.
So did Macy’s underestimate the potential? Lundgren said he didn’t think so, noting the buy is “in the millions,” without specifying. And there’s no plan to extend the life of the collection. “That’s not the idea. It’s really about fashion. We bought it as a capsule collection.”

Asked what’s driving the volume, Lundgren replied: “It’s the signature pieces, the high collars, the sheer blouses and the scarves. There is so much of his signature look to it. Karl was very at ease understanding that he has to make product consistent with his look and with price points that are accessible” to Macy’s customers. The collection also has refined dresses, chic airy tops, feminine shoulder treatments, colors juxtaposed with patterns, florals and turtleneck tops paired with tweed shorts. Among the most elegant pieces — a tailored tuxedo dress with pintucking.

Lagerfeld should help open design doors for Macy’s. “We began this process of trying to think differently about a higher level of fashion for Macy’s, and luxury that we can sell at certain of our stores,” Lundgren said. “We’ve met with great success. There is no limit to what we can do at this store. The results with Karl have gone far beyond expectations.”