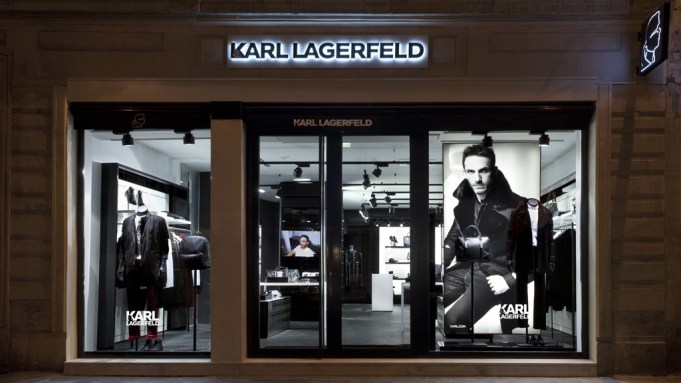 PARIS — Karl Lagerfeld has opened a boutique here dedicated to the men’s wear division of his fashion house, seizing on a buoyant segment boasting double-digit growth in some markets — and chez Lagerfeld.

“A store for men only was very much needed,” said Pier Paolo Righi, chief executive officer of Karl Lagerfeld. “Men’s collections are a strong contributor to our business. This has also largely to do with the fact that while women can turn to Chanel for a piece of the designer, men have nowhere else to go but here.”

Kept sleek in monochrome black and white, the roughly 1,430-square-foot unit sits on Rue Marbeuf, the go-to mile for men’s made-to-measure and upscale tailoring in the French capital. Berluti, Cifonelli, Smalto and Kiton are just a stone’s throw away. “If you want to shop for men’s wear in Paris, this is where you go, and Karl loved the idea and the location,” Righi noted.

The two-story venue showcases the more classically tailored Lagerfeld label and the Karl Lagerfeld range, launched in 2012 with an edgier vibe plus a slimmer and younger fit. The latter currently represents 20 percent of the business, according to Righi.

Decorated with the designer’s sketches, photographs and the contours of his face shining from the wall in bright neon, the shop also stocks the brand’s collection of seven watches (Lagerfeld’s lucky number), small leather goods, perfume, accessories and souvenirs, such as the cartoonlike Tokidoki figurines of the designer holding his cat, Choupette.

In addition, shoppers can browse a selection of books, including “The World According to Karl,” featuring his pithy one-liners.

The brand operates 17 points of sale, mostly in Germany, France, Benelux and China, where it plans to have a total of nine units by yearend. “We are also looking into expansion plans targeting German-speaking countries and France in the next 12 months. But the location is very important. Rather than rolling out fast, we prefer to roll out right,” said Righi.