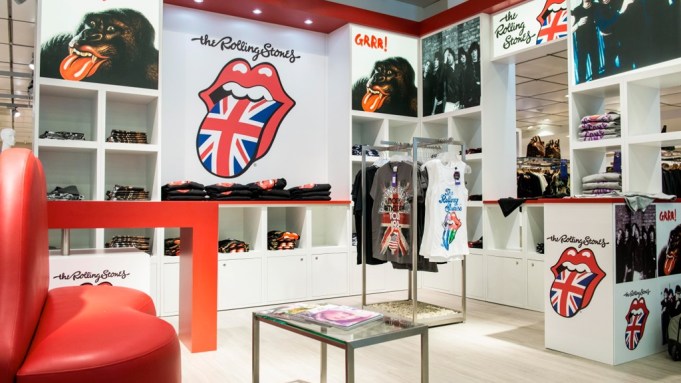 Country promotions are back in vogue and Karstadt in Germany has embraced the strategy.

Karstadt, no doubt feeling some “royal fever” from the birth of Prince George, has wrapped itself around punk, Carnaby Street and British pop culture for a month-long “Feel London” campaign, commencing today. The promotion extends to all 83 Karstadt department stores, which have been refurbishing and repositioning to attract younger shoppers and improve business. The main event is at the completely refurbished 220,000-square-foot Düsseldorf flagship, which has reimagined women’s, men’s and home floors with sharper segmentation of trendy, modern and classic styles. Fashion has been pumped up with increased space, a new restaurant was installed and unprofitable curtains, lighting, books and the drugstore were dropped.

“Karstadt has never done a comprehensive, one-theme event,” Andrew Jennings, Karstadt’s chief executive officer, told WWD. “Why have we picked London? Not because I am a Brit. It’s because London is a cool place and a lot of Germans love London,” Jennings said. “There is no question that there is a renaissance of iconic British looks. Brands like Ben Sherman have really come back into fashion. I’m a big believer in these major events. For 18 months, we have been working on this. It’s all about differentiation. Next year, it will be all about Italy.”

Jennings described the Feel London buy as “a mix of British heritage and fashion” covering all categories at the store. Also part of the mix: exclusive products, special events, the introduction of several brands and a host of celebrities including Jade Jagger, the daughter of Mick Jagger, launching her jewelry, and Sebastian Conran, the son of Terence Conran, who is launching home products.

Karstadt would not disclose the dollar amount of the buy but indicated 10 percent of the merchandise at the department stores through the promotion period would be British or Brit-inspired from suppliers from different countries.

Import promotions were pioneered by two late and great retailers, Stanley Marcus of Neiman Marcus and Marvin Traub of Bloomingdale’s, and were most popular in the Seventies through the early Nineties. The format became played out, but in the past two years, it’s resurfaced with Macy’s in 2012 staging a Brazil event, and currently Bloomingdale’s is running a U.K. campaign. “Feel London will bring a slice of contemporary London life to our German cousins,” said London Mayor Boris Johnson. “As well as strengthening links between our countries, I hope it will entice many more to pay us a visit.”