The actress said Happy x Nature is inspired by her love of bohemian trends and eco-friendly fashions.

Kate Hudson, the original bohemian hippie chick, is back. This time with a new ready-to-wear apparel line.

The actress-turned-entrepreneur, who serves as creative director and cofounder of Happy x Nature, said the line tells the story of a girl who is on a summer road trip through the California desert, experiencing nature.

“She’s taking in the scenery,” Hudson told WWD. “She’s inspired by the flowers and the colors that you see there in the sky and the sun.”

The collection is a collaboration with fashion designer Michele Manz, who has more than two decades in the business and worked as the head designer at Alberta Ferretti in Italy. And the outcome is a combination of cool-girl-meets-cute, meets eco-friendly fashions. It’s a little bit feminine, a little bit casual and has a little bit of a tomboy vibe, much like Hudson herself.

“I would always say I was like a tomboy with a dress on, with all my brothers,” said Hudson, who added that all of the pieces are things she’d want in her own closet. “I’m already living in that one,” she said, pointing to a jumpsuit. But she added that she’s a “sucker” for the long, flowing maxidresses in her collection. “These are like my wardrobe,” she said.

“Back in the day, people really took so much care into everything that they were wearing,” Hudson said. “We’re really trying to do that for something that is affordable for everyone. The attention to detail, you have to tell a story.” 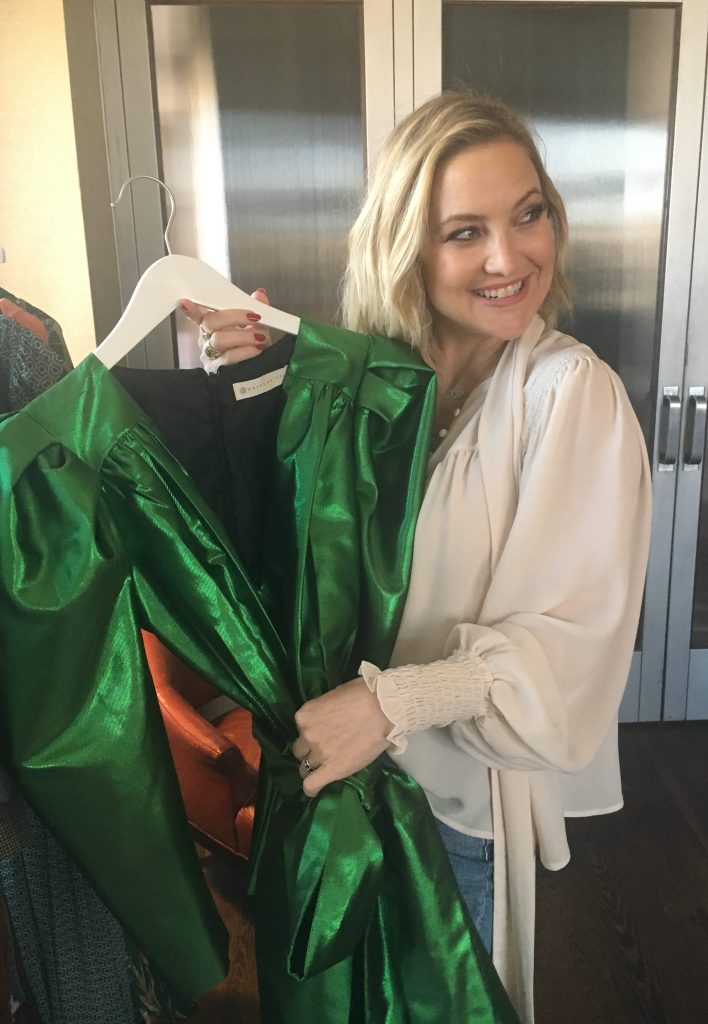 Kate Hudson in New York before the launch of her new apparel line Happy x Nature. Hudson called this green dress one of her favorite pieces in the collection.  Kellie Ell/ WWD

Inclusion is also important to Hudson. She said she wants the brand to be available to everyone, so everyone had the chance to “feel fashionable and wonderful when they put [her] clothes on.”

“There’s a whole world out there that would literally think you’re completely insane for spending anything like that on it,” Hudson added. “When you buy clothes from me, I think being inclusive is important, because there are a lot of people out there who want to be a part of fashion brands that can’t afford it.”

Happy x Nature is owned by parent company Retailwinds, which also owns New York & Company. A representative for the brand said Happy x Nature will be available at Happyxnature.com, as well as in sections of select New York & Company stores nationwide, and potentially will be available wholesale in the future, although no plans have been finalized.

The pieces retail for between $50 and $200 and each month new merchandise will be dropped. But Hudson said staples, like T-shirts and jeans, will remain in the collection forever.

“They’ll always be really feminine,” Hudson said of the pieces. But the girl might move from California to a château in Europe.

“We want to constantly move around the world,” Manz said. “We started with California, because that’s where Kate is from, obviously. But as we go through the seasons we’ll constantly think of new journeys and new themes that will play out.” 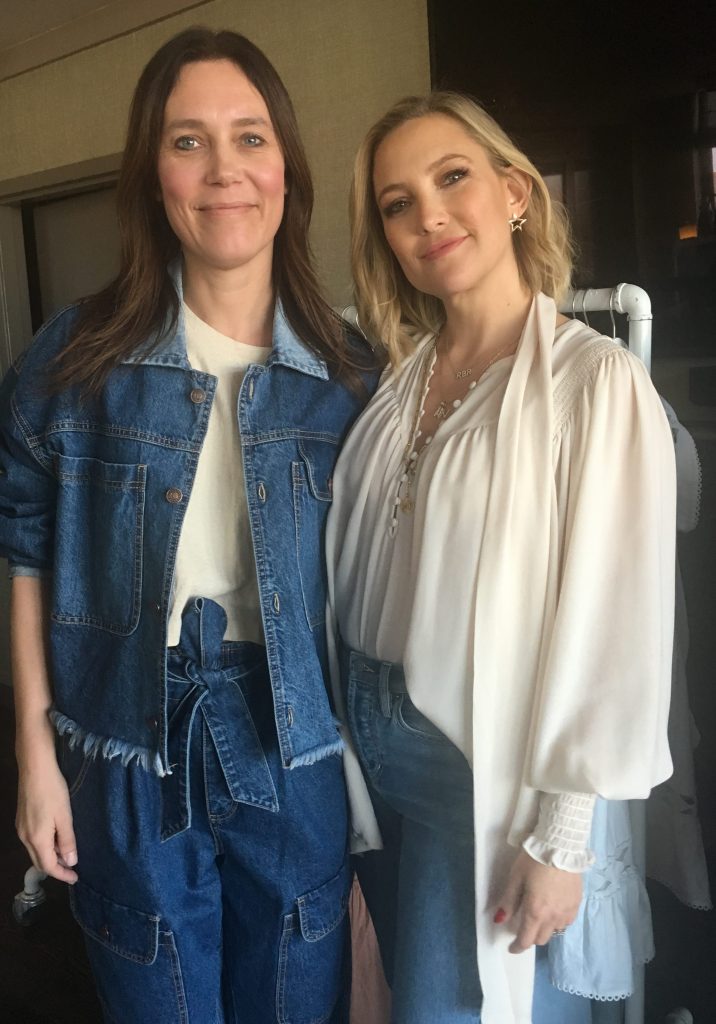 The duo seems like a good fit. Hudson is the brains and Manz is the creative talent.

In fact, Hudson doesn’t consider herself a fashion designer at all. “I don’t know how to draw,” she said. But she said she’s constantly WhatsApp-ing Manz images she finds for inspiration.

“I sent her a picture of an old car the other day and said, ‘we need to do something in these colors because they were so beautiful’,” Hudson said. 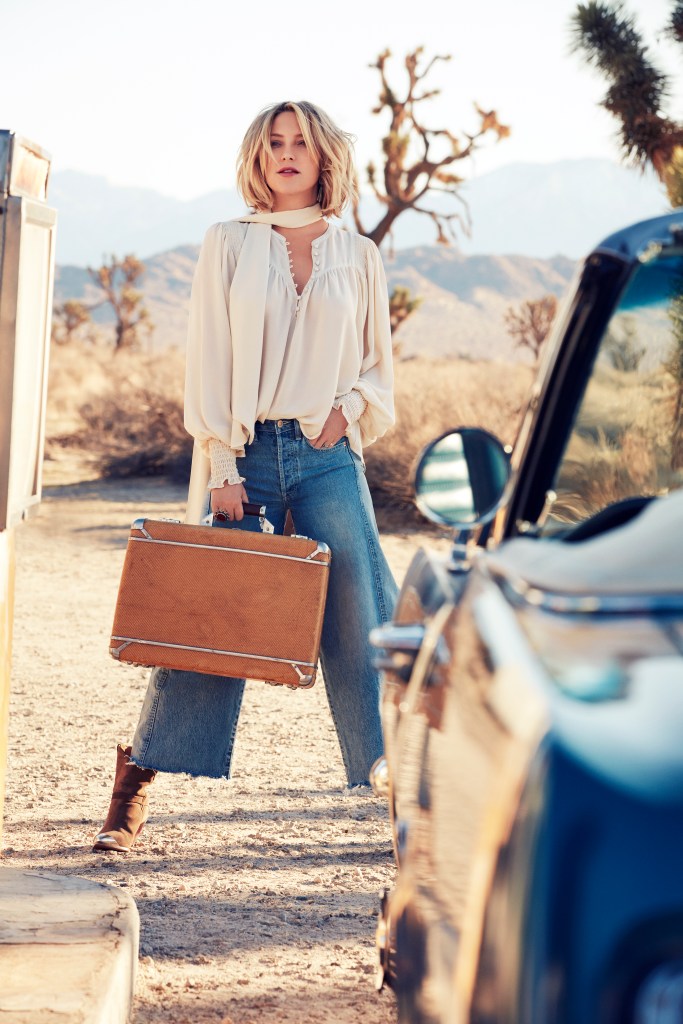 And she’s hardly new to the business world.

In 2013, she cofounded Fabletics, the ath-leisure brand, with El Segundo, Calif.-based TechStyle Fashion Group. The brand, which boasts being affordable and size-inclusive, had annual revenues of more than $300 million last year, along with stores in 12 countries.

Even so, Hudson said she likes retail because it gives her more time to hang out with her three kids, something that is hard to come by doing movies.

“I get to be creative and tell stories in a different way,” Hudson said. “And I love clothes and I love being able to talk about two different companies. [Fabletics] is about honoring your body and the importance of being healthy and being active. [Happy x Nature] is about fun and being free-spirited, but paying attention to how we treat our planet and how we create less waste.”