Hordes of shoppers massed in front of the retailer's Oxford Circus store to see the model appear in the window to launch her new collection. 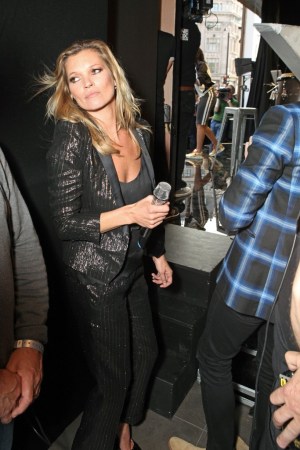 LONDON — Kate Moss can certainly draw a crowd. On Tuesday night, hordes of shoppers massed in front of Topshop’s Oxford Circus store to see Moss appear in the window to unveil her new collection for the retailer.

“I’m so excited,” Moss, who was wearing a black and gold tuxedo suit from her line, told her DJ pal Nick Grimshaw, who introduced the collection to the assembled shoppers. “I just want everyone to find something they love to wear.”

Inside the store, as a clutch of guests got a preview of the new collection, Topshop’s owner Sir Philip Green pronounced the line “the best [collection] we’ve done. Anybody that’s seen the clothes loves them.”

Later, at a cocktail and dinner to celebrate the launch at Mayfair’s Connaught hotel, an equally strong contingent of Moss’ celeb pals was out in force. Stella McCartney, Sienna Miller, Naomi Campbell, Sadie Frost, Pat McGrath and Meg Matthews all gathered to help the model toast the launch.

The chatter naturally revolved around Moss’ famed sense of style. “No matter what she wears, she has a way of putting it together — even if she just wears a skinny jean and a boot and a blazer,” said Chloe Green, the footwear-designer daughter of Sir Phillip Green, who was wearing a black cocktail dress from Moss’ collection.

Frost was keen for Moss to take up her design mantle again, after her four-year hiatus from creating a collection for Topshop. “I was a bit upset when she stopped designing for Topshop — it was so nice to have the access to the things she has in her wardrobe,” said Frost. She said that she’s been kept busy with some design projects of her own, and plans to relaunch the Frost French label she designs with Jemima French next year.

As to any plans to follow up Moss’ design turn with another Topshop collection, Sir Phillip Green said, “Let’s get past today.”