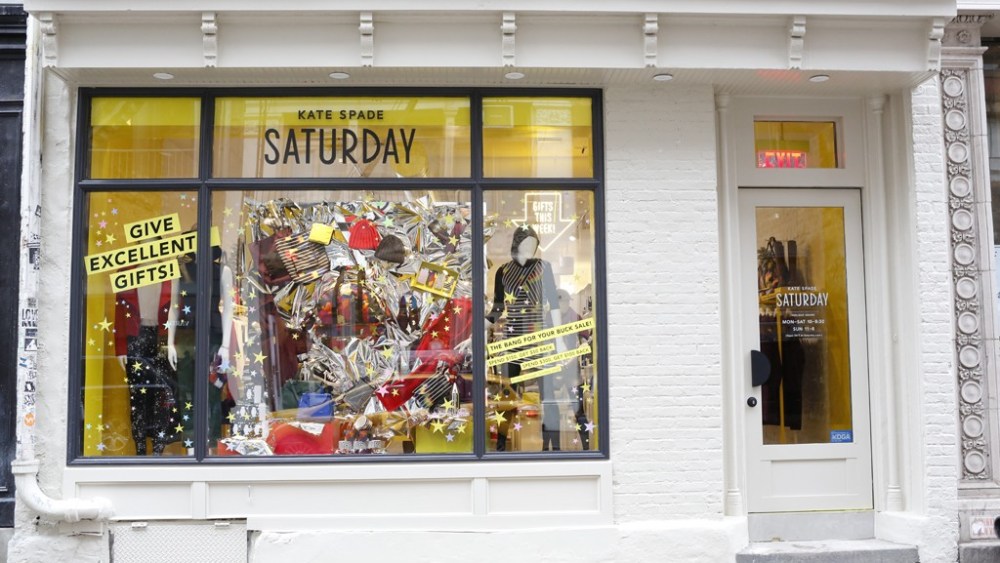 The retailer’s first Manhattan store, a 1,500-square-foot unit at 152 Spring Street, stands out like a giant canary with its storefront painted the brand’s trademark bright yellow.

While the company is opening stores slowly and deliberately for now, Kyle Andrew, senior vice president and brand director, said Kate Spade Saturday could surpass the store count of its sister brand, Kate Spade New York, which boasts 80 units in the U.S. and 100 overseas.

Meanwhile, at John F. Kennedy International Airport, there’s a shock of yellow in the middle of Terminal 5, JetBlue’s hub. “It’s like a sunny little oasis in the middle of a teeming terminal,” said Andrew. Both the store and airport pop-up play on Kate Spade Saturday’s tech-infused concept. The store has a semicircular bar with a charging station, iPads and a customization tool for personalizing Weekender bags. There’s digital signage throughout and also some low-end touches such as a neon sign that reads “Saturday Is Dance Parties” and neon arrows hanging from the ceiling highlighting new products and gifts of the week. For a vintage touch, a record player plays music curated by Amoeba.

Kate Spade Saturday launched as an e-commerce business initially. “One of the challenges online is romancing the product three-dimensionally,” said Andrew. The store utilizes lots of mannequins and apparel hangs from bright yellow fixtures. The store has the first dedicated home department.

The idea for the airport pop-up came from the brand’s goal of making shopping fast and easy. “We asked ourselves, ‘Where is [the customer] going to be at holiday time?’ Rushing through the airport with last-minute shopping to do. It’s an unexpected place to do something in an unexpected way. We won’t sell physical product there, but she’ll be able to shop through monitors with delivery the next day. She doesn’t have to carry it on the plane,” she said.

The SoHo store is Kate Spade Saturday’s second in the U.S. after a Houston unit. There’s a pop-up on Gansevoort Street in the Meatpacking District and one in Los Angeles. The brand also has six units in Japan and a store in Singapore. “We’ve been tweaking the store design since we opened in Tokyo in February,” Andrew said.

“We’re making it more user friendly to shop. Something we learned from the Gansevoort Street pop-up is we like the cool vibe we have there. We’re using pop-ups to generate awareness. We’ll keep them open for now.”

Products universally appeal to consumers across cultures and climates. “Our bestsellers here are our bestsellers in Japan and Singapore,” Andrew said. “The Weekender bag is a universal favorite. The slip-neck T is universally loved. Shoes and dresses have been great and anything in our black-and-white-striped logo pattern is popular.”