The Estée Edit, which targets the Millennial market, will be exclusive to Selfridges London until it rolls out nationwide in July.

By Stephanie Hirschmiller on May 27, 2016
View Slideshow 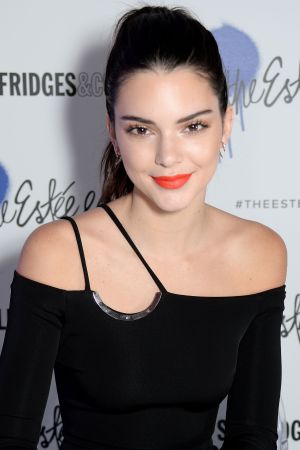 LONDON — Although the women in her family may be famous for their dramatic makeup looks, Kendall Jenner said there are some days when a smidgen will do fine.

“If I’m just running errands, I won’t wear much makeup. I’ll throw on a really nice, light foundation, bronzer and some mascara. I’m pretty simple. It takes me 10 minutes tops,” said Jenner, the face of The Estée Edit, a collection of makeup aimed at her Millennial generation.

Ahead of a low-key personal appearance at Selfridges this week to launch the collection, Jenner added that she also prefers social media looks that are subtle.

“I love bringing out natural beauty on social media; a lot of people try to be something they’re not, but I think the most natural form of yourself is the best,” she said. “I don’t post too many photos of myself. I just like to post a good photo of things I love.”

There’s still some drama in the mix: “I do love my contour and shading and chiseling things out though,” said Jenner before she greeted a crowd of about 200 journalists, friends of the brand and those who’d won tickets to attend the launch on Thursday night at the Oxford Street store.

The Estée Edit, which is targeting the selfie-obsessed Millennial market, will be exclusive to Selfridges London until it rolls out nationwide in July.

Jenner has helped to create a 14-shade eye palette with matte and shimmer finishes incorporating her signature shade of purple. There are also two “transformer” shades that deliver a glow-in-the-dark effect in black light with ultra-violet impact.

“It’s everything that I love,” she said. “The whole line is edgy and fun, and it was cool to be a part of it, and watch it grow and see it from the ground up.”

“The beauty landscape is changing so much,” said Stephanie Sherman, vice president and general manager for Estée Lauder U.K. “So we worked with Millennials and digital influencers like Kendall to develop and create the brand and understand their approach to beauty.”

Divided into “attitudes” rather than prescriptive looks, products include a host of multitasking hybrid products and ones for close-up shots.

There’s Flash Photo Powder — a blue-hued luminizing powder that also controls shine — and Flash Photo Gloss, which contains an iridescent blue pearl designed to make teeth appear whiter, all with the selfie in mind. On that note, there’s also a pore vanishing stick designed to “blur” the skin, much like an Instagram filter. Makeup comes in up to 12 shades catering to different ethnicities.

Even the names of lip shades, such as Killin’ It, Just Sayin’ and ABT Last Night, mirror Millennial speak.

“We asked ourselves ‘What would Estée Lauder do if she were around today?’” said Chris Good, president of The Estée Lauder Cos. in the U.K.

“Beauty is a category that is defined by disruption and The Edit represents a really disruptive element,” he continued. “Lauder was a great innovator and disruptor in her time. She was the first to do gifts with purchase, unisex fragrances and first to bring makeup artists into department stores.”

Sherman said there is no risk of alienating the core Lauder customer. She said existing customers who have come to have a play with the new products later returned with their daughters.

So far, the Flash Photo Gloss and Flash Photo Powder have proven the most popular products, and Sherman said going forward, the plan is to have constant newness.

The next wave will be about “more hybrid products that you can use on lips and cheeks and eyes,” she said. “Customers have also been asking what they can do to contour and add more definition in a selfie, so we’re looking at that too. The Edit is a partnership with our customers.”