NEW YORK — His name isn't as recognizable as Trump or Macklowe, but then, Kenneth Himmel doesn’t crave the spotlight. For the last 30 years, he's been quietly building mixed-use developments that feature high-end residential, retail,... 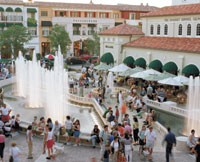 NEW YORK — His name isn’t as recognizable as Trump or Macklowe, but then, Kenneth Himmel doesn’t crave the spotlight. For the last 30 years, he’s been quietly building mixed-use developments that feature high-end residential, retail, food and hotel components or some combination thereof.

A career that includes Water Tower Place in Chicago, Copley Place in Boston and CityPlace in West Palm Beach would be enough for some people, who at age 58, might consider slowing down. Not Himmel. Eight years ago, he took on the challenge of developing the retail component and restaurant and bar collection at the Time Warner Center, a $1.7 billion hotel, office, shopping and condominium complex, built on one of the Upper West Side’s most coveted and hotly contested sites, the former Coliseum.

For the project, Himmel formed Related Urban Development with Steve Ross, chairman and chief executive officer of The Related Cos., the primary developer.  “Steve got into the pipeline for this site,” said Himmel. “I brought the retail and hotel and other mixed uses.”

He took an unusual approach to the Shops at Columbus Circle, leasing a 60,000-square-foot below-grade space to Whole Foods Markets. “It was a gutsy move for both of us,” Himmel said. “There’s no outside signage or entry. Whole Foods went to study Harvey Nichols’ fifth floor. This is their number-one or -two store in the country.”

“We weren’t going to compete with Madison and Fifth,” he said. “We never even considered it. This was about understanding who the market is.”

From the beginning, critics said New Yorkers wouldn’t shop in a vertical mall. Himmel thought the restaurants and Jazz at Lincoln Center would give customers enough reasons to visit, but he wasn’t without jitters. “Believe me, I didn’t sleep for six years,” he said.

When it comes to food, Himmel knows a thing or two. “I started off in the hospitality business,” he added. “I went to hotel school at Cornell University.”

He also owns three popular eateries in Boston — Grill 23, Bar and Excelsior — and Harvest in Cambridge. At the Shops, Himmel assembled a constellation of star chefs never before associated with a shopping center, including Thomas Keller, Jean-George Vongerichten, Gray Kunz, Charlie Trotter and Masa Takayama.

“We do projects where we really get inside the uses,” said Himmel. “We create food and beverage menus. We hire and work with the architects ourselves.”

Howard Elkus, a principal in the architecture firm Elkus-Manfredi, met Himmel on a ski lift in Waterville Valley, N.H., in 1972, and was immediately impressed. “Ken is driven,” he said. “He has great self-confidence, conviction, enthusiasm and optimism. He also has the gift of great salesmanship.”

Himmel’s first project, Water Tower Place, was a trial by fire. After a stint at Cabot, Cabot & Forbes, Himmel was hired by Urban Investment and Development, which promptly dispatched him to the Windy City where Water Tower Place was being built.

“I was working on this incredible project in Chicago where I got connected with Tom Klutznick,” he said. “He became my mentor throughout my career and exposed me to retail.”

Water Tower Place, which opened in 1975, was the forerunner to today’s billion-dollar mixed-used complexes. The 74-story building has an eight-level vertical mall anchored by Lord & Taylor and Neiman Marcus, office space, a 22-story Ritz Carlton Hotel and 260 luxury condominium units.

“It was an unconventional project,” Himmel said, noting that no one had built an urban shopping center with upscale retailers before. “I learned to take something that was out of the ordinary, muscle my way through and make it work.”

In 1977, Klutznick, Himmel’s boss at Urban, asked Himmel what he wanted to do next. He knew of a site he wanted to develop in his native Boston in Copley Square. After an approvals process that lasted seven years and was marked by wrangling with city and state officials and the turnpike authority, Himmel found he had to replace his architect. He phoned Elkus, who was living in San Francisco. In true Himmel style, he said, “‘Howard, I want you to come to Boston immediately.”

When Copley Place opened in 1984, the upscale complex was unlike any Boston had ever seen. Here was a mall — downtown — anchored by Neiman’s and filled with specialty stores such as Louis Vuitton, Christian Dior and Gucci. This was in addition to office space, condos and two hotels.

“Ken has always sought the upper end of the market,” said Elkus. “That’s where he begins.”

As usual, Himmel’s plate is full with projects in various stages of completion. Grand Avenue in Los Angeles, a $1.2 billion complex with 3.2 million square feet of new construction on four downtown city- and county-owned parcels, is about to move forward. Related beat out seven other major developers.

Himmel’s concept for the project, which will include offices, retail, housing and a hotel, places a large emphasis on food and fun. “The anchors of the project will be restaurants and entertainment,” he said. “We’ll have a Whole Foods Market, an art film house, a health club and spa, W Hotel, luxury condominiums and retail.” There also will be a park connecting City Hall with Bunker Hill. Himmel envisions programming the park like Bryant Park here, with film series, concerts and other events.

As far as Manhattan is concerned, Himmel is busy downtown. He’s working on an unnamed 800,000-square-foot site below Wall Street, which will include a performance venue for Cirque du Soleil and a department store.

“Look at the amount of public investment in lower Manhattan and the growing residential population,” Himmel said. “We’re talking to several department stores about joining us.”

Along the Boston harbor, Related is planning to develop 25 acres with 1 million square feet of retail. “The seaport will become a regional shopping center with high-quality traditional stores like Nordstrom, Neiman Marcus, Bloomingdale’s and Saks Fifth Avenue,” Himmel said.

Meanwhile, on the border of Scottsdale and Phoenix, Himmel is relishing the opportunity to build a community, City North, on 140 acres with 6 million square feet of mixed-use space and a significant retail component anchored by a town square. Himmel was mum about the retail tenants, except to say that the assortment will be different. “There’s so much commonality,” he explained. “It’s very hard to find uniqueness.” Lest anyone think Himmel would do something as conventional as a run-of-the-mill shopping center, he said, remember, “I’m the anti-mall guy.”