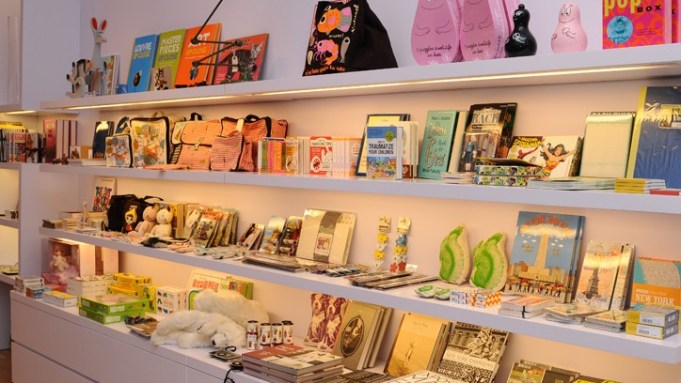 NEW YORK — Kisan Concept Store, which opened in SoHo during fashion week, has a simple guiding principle — every item is chosen by its owners, Thorunn Anspach and Olivier Bremond.

The married couple launched the original Kisan in Reykjavik in 2005. Since then, the store has become something of a phenomenon, attracting crowds during the midwinter polar nights and despite Iceland’s troubled economy.

“Reykjavik is extremely small,” Bremond said. “There are less people in Iceland than in SoHo. In Iceland, there’s a huge financial crisis. The real estate market is down and many stores are closing. Yet [Kisan] is always packed.”

The 1,300-square-foot unit, located at 125 Greene Street, is expected to do more than $1,000 a square foot in sales, Bremond said. “We are starting with more than $1 million in inventory.”

The store is being managed by Lionel Guy-Bremond, Olivier’s cousin. Anspach and Olivier Bremond plan to spend one week in New York each month to fine-tune the chemistry of the store. “It’s very personal,” Anspach said. “The idea was to put together everything we love.”

Prices range from $5 to $5,000 for merchandise ranging from CDs, books and films, which represent the couples’ cultural tastes, to fashion and home furnishings.

Although some fashion resources, such as Sonia Rykiel, are sold at Barneys New York, Anspach noted that Kisan is the brand’s only retailer downtown. Besides, “the way we’re going to present it is very different from the way they do….It’s for young women. It’s to die for.”

“Luxury should be open to everybody,” Bremond said. “New York fits with what we are all about. We like beautiful things, but we’re still cool.”

Kisan in SoHo was designed by Work Architects Co., which is responsible for Diane von Furstenberg’s West 14th Street store and headquarters and the P. S. 1 Contemporary Art Center in Queens, N.Y. It has a clean, minimalist look. The 14-foot ceiling is meant to represent Iceland’s snowcapped highlands, with its triangulated surface and panels and lights sloping at various angles.

The idea for Kisan developed during Anspach and Bremond’s previous career as founders of Marathon, a television production company based in Paris.

In 2005, the couple sold the company and moved to Iceland. “We’d been traveling a lot for TV and found a lot of great things,” she said. “We choose things with so much excitement. We never want to do any kind of Internet business. We want people to come to the store.”