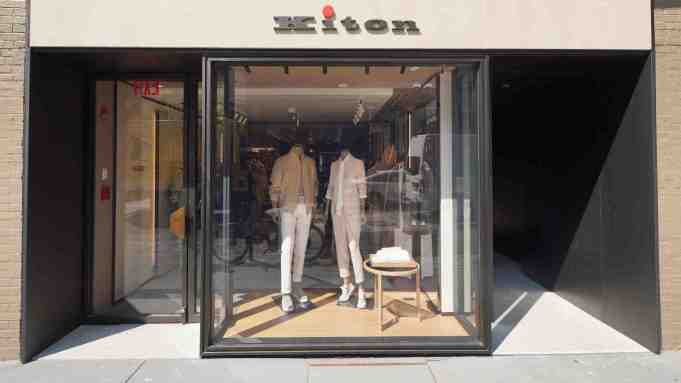 Now that the summer is over, Kiton is ready to welcome the fashion community to its new home on Madison Avenue.

The Milan-based luxury brand quietly opened a two-level, 1,700-square-foot shop at 692 Madison Avenue, last month, but has slated a grand opening for Tuesday during New York Fashion Week where it can officially show off the new boutique to the city’s movers and shakers.

The store, which complements the company’s six-story town house on 54th Street, is dedicated to the growing women’s collection, which takes up the entire first floor. Menswear is carried on the second level, but the mix is centered around sportswear and the younger-skewed KNT collection. A couple of tailored pieces are merchandised in the rear of the men’s floor, but any shopper seeking suits, furnishings or made-to-measure will be directed to visit the town house eight blocks south.

Womenswear accounts for around 20 percent of the company’s sales — up from only 5 percent before the pandemic began — and the goal is for it to expand to 50 percent within five years, the company has said.

The women’s collection is overseen by Maria Giovanna Paone, president of Kiton Group and creative director of womenswear, who is the daughter of Ciro Paone who founded the company in 1956. Kiton remains family owned with Ciro Paone’s other daughter, his grandchildren, nephews and grandnephews among those who operate the business today.

“Our future is concentrated a lot on retail,” Maria Paone said. “We’ve been changing our locations to be in better positions.” That includes stores in Milan, Rome and Dubai where Kiton took larger spaces to accommodate the expanded women’s collection. Overall, Kiton operates some 60 stores in 25 countries.

And it’s paying off: Antonio De Matteis, chief executive officer of Kiton, and Maria Paone’s cousin, said recently that after the new stores opened, women’s sales increased from 5 percent to 35 percent in Milan, zero to 50 percent in Rome and zero to 30 percent in Dubai.

Maria Paone said the Madison Avenue store has done surprisingly well since opening, despite it being the dog days of summer in New York. “It’s doing very well,” she said, adding that it has been a pleasant surprise since Kiton doesn’t advertise as robustly as other brands.

She said showing women’s apparel, shoes and footwear on the first floor is not just about increasing sales, but also speaks to the propensity of women to stop into a store if something catches their eye. “Men go more for the destination,” she said.

What she hopes will catch women’s eyes this fall is Kiton’s luxurious assortment of silk dresses, cashmere jackets and overcoats, cotton/velvet corduroy suits, cashmere/silk/angora sweaters, scarves, bags and shoes. The inspiration for the season, she said, was a mosaic from a church in Naples, which showed up in silk shirtdresses and other pieces.

In addition to its everyday collection, Kiton is also offering a dressier assortment for women for cocktail parties and other events, a collection that includes tuxedos. But to Maria Paone, this formalwear can also be dressed down to appeal to the modern woman by pairing it with jeans. “It’s a mix between elegance and sportswear,” she said.

There are also cases that house the footwear — heels as well as cashmere sneakers — along with bags and other accessories.

The men’s offering includes sweaters, sport coats, jeans, joggers, hoodies, jackets and footwear from the core collection along with the more streetwear-inspired KNT assortment of bombers, skinny trousers and other pieces.

In all its products, Kiton is known for its high-quality fabrics and manufacturing thanks to its high-end production facilities. The company, which employs more than 750 people around the world, operates five factories including a knitwear facility in Fidenza. In 2010, it acquired a controlling stake in Biella, Italy-based textile mill Carlo Barbera, a well-known high-end yarn manufacturer.

Maria Paone said the same high-end fabrics are used in both the men’s and women’s collections, and the palette and patterns are similar in many instances.

While she is inherently proud of the family’s long heritage in Italy, New York also holds a special place in their hearts. “The idea of being on Madison Avenue was always a dream of my father,” she said. “He came to New York in 1986 and rented a small showroom — 50 square meters — in the Crown Building on Fifth Avenue. Then in 2001, we bought the building on 54th Street for our American headquarters. We love New York. My father and mother lived here for a year and he always said the only places he would live would be Napoli, Milano and New York.”

So it was with pride that the family designed the new Madison Avenue store to resemble a residence with cozy seating areas on both floors. “It gives you the idea of being in a home,” she said.

Kiton will fete the new store with a ribbon-cutting and cocktail reception on Tuesday night.