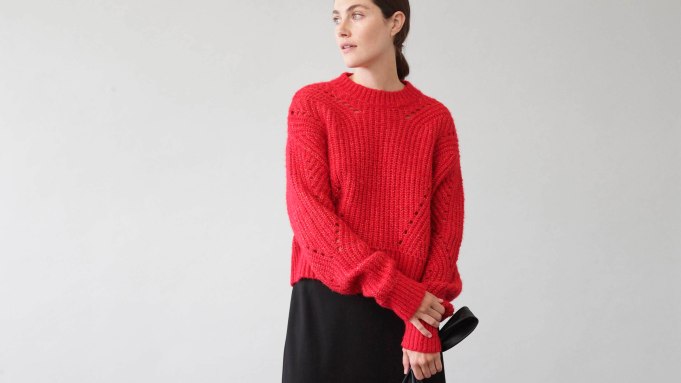 At a preview of Kohl’s Inc.’s holiday pop-up in Manhattan’s SoHo that the retailer unveiled on Wednesday, chief executive officer Michelle Gass repeated one word over and over: newness. “The key takeaway is newness, in terms of products, marketing and technology. I feel really good about the progress we’ve made in omnichannel. We sit here today with health in our stores,” she said.

Gass said Kohl’s has been thinking about stores differently in recent years, which led to a partnership with Amazon where the retailer accepts customer returns for the digital giant. In time for the holiday season, the program has gone live in Kohl’s units nationwide. “We’re very pleased with the launch traffic,” Gass said. “We’re seeing new customers, including a younger customer. Our digital business has continued to grow and we’ve made a lot of investments there.”

Chief merchandising officer Doug Howe said Kohl’s is launching more brands this holiday period than in seasons past. Key brands command rooms at the pop-up where their messages are writ large. Kohl’s is the exclusive distributor of Elizabeth & James. “They’re very involved,” Howe said of the Mary-Kate and Ashley Olsen-designed line. “It’s more aspirational than some of our proprietary brands.”

A limited time collaboration with Jason Wu displayed in a rose-filled space next door features the designer’s feminine party looks, such as a black illusion mesh dress, ruffle shoulder A-line dress, and rosette halter dress, $59.99 each.  “Jason said he wants to sell out of all of the product, and we’re going to let him,” said Howe.

LC Lauren Conrad, while not new, is celebrating its 10th anniversary with a special collection. “It started with apparel and evolved into accessories and home, and continues to evolve,” Howe said. “It resonates with a younger customer.”

Other brands for holiday include ED Ellen Degeneres Pet, Koolaburra by Ugg, an exclusive home collection, and Scott Living from Jonathan and Drew Scott of HGTV’s popular “Property Brothers” show.

The Outfit Bar, a new concept, is geared toward Millennial customers who rarely wear one brand from head to toe. Complete outfits are highlighted, and footwear and handbags are merchandised next to apparel for ease of shopping. Howe said the metrics for average order value and number of units have been strong as a result of The Outfit Bar.

Kohl’s boasts 60 million consumers, with more than 30 million on the e-commerce platform.  “All customers appreciate the service of providing style advice,” Howe said. “We’re exploring other opportunities to expand mannequin wardrobing, and personalization continues to be a focus for us.”

Curated by Kohl’s, which is being tested in 50 doors and online, brings six digital-native brands with niche products and compelling founder stories to consumers through adjacencies or self-contained shop-in-shops. “There’s an opportunity in the beauty space,” Howe said. “We’re rolling out 12 more The Beauty Checkout shops with the tag line, ‘We checked out the best brands so you don’t have to.'”

Expect more Kohl’s Cash, said Greg Revelle, chief marketing officer, including $15 for every $50 spent in stores and online during the week leading up to Black Friday. Kohl’s Cash is being promoted with a football extravaganza commercial, where moms run across the field scoring key products the way quarterbacks catch passes. The retailer is launching daily deals, and layering 20 days of deals onto other promotions.

“We’re leaning into ease and convenience,” said Paul Gaffney, chief technology officer. “We’re making things easier for customers and sales associates. We’re deploying 10,000 new handheld devices to stores, and we have a new point of sale, or rather, point of commerce system. We’re piloting in 40 stores a new approach where you start the return process before you get to the store.”