The general manager at Stanley Korshak recently tossed out four garbage bags filled with reports on its luxury retail business. They became superfluous after the installation of a new point-of-sale management system.

"You can drill down into... 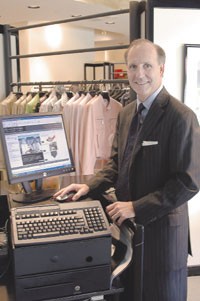 The general manager at Stanley Korshak recently tossed out four garbage bags filled with reports on its luxury retail business. They became superfluous after the installation of a new point-of-sale management system.

“You can drill down into sales detail that we never had before without running five reports this big,” said Crawford Brock, Korshak’s owner, spreading his hands 6 inches apart. “I can look at sales by department, class, description, history, color and style. I can access it by vendor and by customer. It’s amazing.”

The Dallas-based company uses Cybex Systems software running on a network of 30 Dell personal computers, including 18 point-of-sale PCs with flat screens and Internet access. New Symbol Technologies hand-held scanners are bringing Korshak into the bar-code age as all fall receipts are tagged with the codes.

Brock invested about $200,000 in the equipment because he saw it as essential to his goal of doubling Korshak’s annual revenue to $60 million within a decade. He said the cost will equal what he would have paid to his former computer provider, STS/NSB, in two years.

“In the last 12 months, I’ve expended a substantial amount of money on the store interior and I plan to spend more on the exterior and add square footage,” he said. “I looked at our computer system and asked, ‘Is this going to give us what we need?’ We had to make a move, and this was the best available.”

Korshak, which has 37,000 square feet of selling space at the Shops at the Hotel Crescent Court, last year did $30 million in sales of women’s and men’s fashion, shoes and accessories, as well as cosmetics, tabletop furnishings, gifts and bridal. Brock said business was 20 percent ahead this year and he is negotiating to take another 15,000 square feet of space in time to celebrate the company’s 20th anniversary in 2006.

Turning to the PC behind his desk, Brock clicked and displayed a list of about 10 items by vendor that had sold in the first hour of business, for a total of $1,352.25.

“Before, we couldn’t tell that we had sold an item until the next day,” he said. “Now, if someone wants a skirt in a size 6 and it sold, we know there is no point in looking for it on the racks.”

Equally important is information on what’s not selling, which enables managers to decide whether to send an item back, mark it down, move it around in the department or take another option.

The system tracks the performance of each salesperson, listing individual clients and the amount of money they have spent at the store in each of the past three years. It stores customer profiles easily at the point of sale, including e-mail addresses, sizes, preferences, birthdays and anniversaries. Previously, e-mail addresses had to be entered in the back office, and most sales associates wrote records of customer profiles on paper.

“This helps the salespeople anticipate what they will do,” Brock said. “It’s a piece of cake going forward.”

The extensive reporting capability will enable Brock to share information more easily with the 12 other members of the Forum, a group of fashion retailers that open their books to each other so they can compare performances and exchange advice. Among the other members are Mitchell’s in Westport, Conn.; Malouf’s in Lubbock, Tex., and Rubenstein’s in New Orleans.

“We compare markup, gross margin, profits, payroll expenses,” Brock explained. “If my markup is lower than the Forum’s average, I know I need to do a better job.”

He said a few of the other Forum members are looking at the Cybex system, and he hopes that one day they might all be linked electronically.