Retailing wise man Stanley Marcus gave Crawford Brock advice in the Eighties that he didn't fully understand until after Marcus' death in 2002. 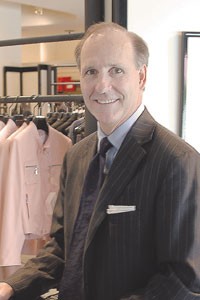 DALLAS — Retailing wise man Stanley Marcus gave Crawford Brock advice in the Eighties that he didn’t fully understand until after Marcus’ death in 2002.

Marcus, the creative force behind the Neiman Marcus brand, told him, “‘You have to change,'” Brock recalled.

Brock, who bought luxury retailer Stanley Korshak in 2002 after managing the store for 14 years, said, “I assumed it meant you had to keep up with the times. But what he was really saying was you have to create change in your business. If you stay the same, you’re going to die.”

The business has lived by that adage, which helped Stanley Korshak survive and thrive in competition with larger rivals such as Neiman’s and Saks Fifth Avenue. Though propelled by the growth in luxury, the rise of the store is nonetheless a model of how a relatively small retailer can succeed.

Catering to affluent shoppers with personalized service and a sophisticated mix of women’s and men’s designer apparel, shoes, home furnishings, gifts and bridal gowns, Dallas-based Korshak hit its groove in the last few years, and Brock’s goal is to double sales to $70 million in the next decade.

Brock has embarked on a $2 million expansion and renovation, and by February, the store is to occupy most of the retail center that is part of the Crescent Court hotel and office complex in Dallas’ Uptown section.

Construction has started on the newly leased 12,000-square-foot store across the courtyard from the Korshak flagship, where Brock intends to create a 3,000-square-foot boutique for men and women along the lines of Scoop and Fred Siegel. The rest of the building will be for executive offices and receiving.

Brock has leased a 1,000-square-foot storefront next to Korshak’s bridal boutique, which is also on the courtyard. He’ll use it to expand gifts, stationery and home furnishings adjoining the bridal and Pratesi linen shops.

At the 35,000-square-foot flagship, Brock plans to expand jewelry and designer collections in a series of renovations through May. He also is building a private dining room to entertain customers.

“We have businesses that are growing by huge amounts, almost doubling, like bags, soft accessories, jewelry and women’s ready-to-wear,” Brock said. “And the way to get them additional space is to relocate some of the business within the store over to the new space.”

The strategy relies on continued strength in the luxury market, said David Szymanski, director of the Center for Retailing Studies at Texas A&M University.

“One has to be a little bit more of a cautious optimist as to whether that sector of the market is beginning to slow down a little bit,” he said. “At the same time, there is always opportunity to grow the business.”

Korshak was struggling when Brock, 51, a Georgia doctor’s son who once planned to follow his father into medicine, arrived in 1987 to manage it for owner Caroline Rose Hunt. She had bought the rights to the name Stanley Korshak, a Chicago entrepreneur who opened a general merchandise store around 1909 that became known for its European luxury goods. The Chicago store had closed in the early Eighties before Hunt opened the Dallas unit.

Brock had an ideal background. Schooled in Neiman Marcus’ executive training program, he spent 12 years in buying and management there, including time as merchandising manager at Neiman’s Beverly Hills store.

Korshak’s avant-garde mix of merchandise was unfocused and unprofitable, Brock recalled. It didn’t help that Dallas’ economy was hammered by falling oil prices that triggered a string of bank failures.

In addition, the other retail tenants in the Crescent Court center were more traditional, such as the Boehm porcelain and an antique store, which didn’t mix with the edgy clothing of designers such as Issey Miyake and Comme des Garçons at Korshak, said Carl Youngberg, a retail and workplace consultant in Dallas.

Brock now relishes describing Korshak as a “mini Bergdorf Goodman.” He likes to win, whether on the tennis court or the sales floor. Yet retail was not Brock’s first career choice. His path into medicine was derailed by a mediocre grade in college biology and he switched his focus to business.

In 1988, Brock’s retail education began in earnest: eight years of mentoring by Stanley Marcus. It was the year after General Cinema had bought Neiman’s from Carter Hawley Hale, and Marcus, who had a retail consulting practice, had not been invited to serve on the board. When Brock asked for advice, Marcus not only agreed, he helped establish one of Neiman’s most formidable competitors in Dallas.

“When we were trying to decide what Stanley Korshak was going to be, our discussion was: ‘You are either at the top or at the bottom,'” Brock said. “Anything in the middle was going to have trouble.”

The same philosophy that built Neiman Marcus was put into practice at Korshak. Marcus emphasized creating partnerships with vendors. He advised Brock on attracting good salespeople, and he coached him on service.

Korshak repositioned itself with more wearable clothing, such as designer sportswear by Donna Karan and Armani, and luxury items, including sable furs and Christian Louboutin shoes. Brock also relied on word of mouth.

“You take care of one customer really well, and they go back and tell 10 of their friends,” Brock said.

Another critical factor has been Korshak’s staff. In 1997, Brock hired a 30-year veteran of Neiman Marcus, Kay Glatter, who retooled the rtw department by introducing Carolina Herrera, Missoni and Bill Blass.

Brock is a demanding boss; he expects the staff to be positive, productive and to go the extra mile.

Korshak does 70 percent of its business with women’s merchandise, fleshed out by men’s tailored clothing, including house-made custom suits and top designer labels such as Ralph Lauren, Oxxford and Brioni.

The store will have about $35 million in sales this year and has been charting a growth rate of 20 percent over last year’s $30 million, Brock said. Five years ago, volume was $12 million. The store weathered the economic slowdown that began at the turn of the millennium by trimming expenses and inventory.

In the next five years, Brock said, “We will be smoking past $50 million, no problem. From five to 10 years, we are working on the next $20 million on top of that….We’re giving businesses the space they need to grow to where we think they can be. That for sure is $60 million, and we think $70 [million] could happen.”

That will require developing customers such as Amy Carreker, who has been shopping for special pieces at Korshak for about two years. The selection, coupled with a saleswoman who understands her style, has earned her loyalty.

“It’s boutique shopping with more personal service, and it’s not crowded like something in the mall,” said Carreker, chairwoman of one of Dallas’ biggest charity events, the Cattle Baron’s Ball.

She is in the wealthy demographic Korshak woos, and the store is small enough that buyers can cultivate shoppers like her by working the sales floor themselves.

“Very few stores fit into the category that Korshak does,” Courtney said. “They are so specialized, and they have great relationships with clients.”

The first phase of the changes in the flagship began this fall in accessories, where handbags and shoes are spreading into an adjacent 1,250-square-foot area that held gifts. The department will feature three new soft shops for Bottega Veneta, Valentino shoes and handbags and Brics luggage and bags. Totaling 4,200 square feet, it already has a Lambertson Truex boutique.

Korshak’s leased hair salon will be freshened with a more open floor plan and warm gold, cream and chocolate decor. Awnings in Korshak’s black and gray stripes will shelter both the front and rear entrances.

Next year, after contemporary lines have moved into the new boutique, the vacated 4,500-square-foot space will be home to classic women’s designer collections, such as Belvest, Kiton and Loro Piano. This will free up room in the existing women’s designer department for expansions of shops for Carolina Herrera, Ralph Lauren and Valentino.

“There will be new collections in both areas,” noted Rose Clark, vice president and general merchandise manager.

The contemporary department that is to move across the courtyard does well with Allen B., Diane von Furstenberg, Red Valentino, M Missoni and 12th Street by Cynthia Vincent, along with denim by True Religion, Seven and Prasad. Swimwear and lingerie also will move to the trendy new store.

Jewelry is the highest-producing, most profitable department, yielding $3,000 in sales per square foot. Located in 2,100 square feet on the main floor, it is to branch into 600 square feet of prime space at the main entrance.

Brock said he has considered opening other stores, but only briefly. “To go duplicate this, where do you go?” he asked. “It costs so much, and I don’t want to take my eye off the ball.”