Expectations were modest, but showrooms enjoyed a surprise windfall during the five-day market in Los Angeles. 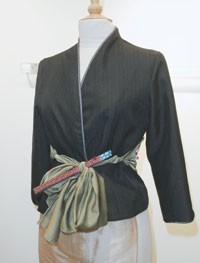 LOS ANGELES — Expectations were modest, but showrooms enjoyed a surprise windfall as they met and surpassed goals during the five-day market that wrapped up here Tuesday.

Focused on late fall and holiday deliveries, the market wasn’t anticipated to shine because it fell in between seasons and followed split market sessions in April that created industry confusion. But the California Market Center’s new owner, Jamison Properties, didn’t take any chances with its debut. Officials said a telephone campaign that reached thousands of retailers helped drum up interest.

“It was extensive compared to past telemarketing efforts and was successful in generating awareness for the market, which can typically be quiet,” said a spokeswoman for Jonas Walker, the market center’s retail relations manager.

“It’s been good for us,” said Patty Park, U.S. sales director for BGN, which has tripled its space to a 3,000-square-foot showroom. “Retailers are looking for dressier styles, which has helped us open new accounts both on the East and West coasts.”

Missy Arko, who operates the Fille showroom at the Cooper building and represents Harveys, Heatherette, Meghan and My Tee, said she worked “till 7:30 p.m. every night writing orders.”

Specialty retailers from Seattle, Portland and Chicago, among other locales, with the core from the West Coast, placed orders for summer immediates as well as for later in the year. It didn’t seem that a fashion newcomer could elbow the year-old bohemian trend off its perch. Tiered, flowing skirts and longer camisoles embellished with nailheads and wooden beads and chunky sweaters laced with Lurex were at the forefront of the trend. For retailers, gypsy-inspired looks were still a customer favorite.

“The clothing is easy to sell and fits most bodies,” said Mark Goldstein, who owns Madison in Los Angeles. “It’s very California. We just hope it continues.”

“We’re a beachside community, so these looks are perfect for layering,” said Johnson, who said MiJo lace skirts and goddess knit dresses and Puella’s printed corduroy skirts caught her eye.

To update the peasant girl, the skirts were using heavier material such as printed corduroy and crushed velvet, including flowy looks by Zoe. Coordinating with the skirts were jackets repackaged into capelets, and boleros from the velvet interpretations at contemporary line Jak & Rae to jacquard styles with cap sleeves by Notice. Another fresh jacket interpretation was the kimono created by Claudette, using silk scarves, and Wrapture, mixing fabrics such as men’s wear prints with an ornamented, fringed obi.

Romance was in the air for holiday dressing, featuring lace-overlay dresses and Forties glamour in shirred bodice numbers by Corey Lynn Calter. Empire-waist slipdresses were another jeune fille look of the season, including Heatherette’s silk chiffon dress and BGN’s satin frock with mesh overlays.

“Many people didn’t make it in March or April, so we’re reaching existing customers as well as newcomers,” she said.

New denim lines weren’t in abundance at the show, dominated by existing players such as Blue Cult, Paige Premium Denim and Hudson. To stay fresh in the crowded marketplace, Blue Cult was changing its style with new oversized back flap pockets, and Hudson was offering exclusives to popular boutiques such as Blue Bee.

New York-based Neves 7 was a new denim line whose point of differentiation was customization. Retailers or even shoppers can order the cashmere and stretch jeans with the addition of buttons, ties and chains. Sirens & Sailors in the Echo Park section of Los Angeles and Habit in Newport Beach, Calif., picked up the line, said Neves sales rep Liza Abrahams.

A number of vendors, either catering to that “date top” or the casual weekend shirt, were more than appreciative of the perpetual sales march of high-end denim.

“Thank God for denim,” he said. “As long as it remains strong, my shirts at $30 to $40 wholesale become impulse items.”

Hecht said the onus remains to stay fresh. New for fall were his tunic-styled cable-knit hoodies with oversized buttons.

Denim and T-shirts were top of mind for a number of Japanese buyers visiting the show, including Tokyo-based Spice.

“L.A. fashion is popular in Japan, so this is an important market for us,” said Moto Calloway, a shipper for Spice.