La Ligne: Being Nimble in the Age of Coronavirus

Because La Ligne is 80 percent direct-to-consumer, it isn't dependent on so many partners.

A fall look from La Ligne

La Ligne, the contemporary brand that does the majority of its business direct-to-consumer, finds itself in a fairly enviable position during the coronavirus pandemic. 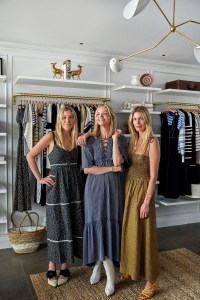 Given that their business is 80 percent d-t-c, they aren’t dependent on so many partners. “We are able to make changes and act quickly and change deliveries of things, launch products on different days, add discounts wherever we want and do a sample sale online. We give a portion of proceeds to charity every week. We’re able to take these measures to take care of our cash flow because we have that flexibility as a small brand and a direct-to-consumer brand,” said Howard.

La Ligne, known for its striped and elevated essentials, also sells to two wholesale accounts, Nordstrom and Net-a-porter. The company, whose Web site is lalignenyc.com, has a store that’s temporarily closed on Madison Avenue, between 77th and 78th Streets in New York. Howard said the company was able to keep its 16-member staff intact. They employ 13 full-time employees and three who work part-time. 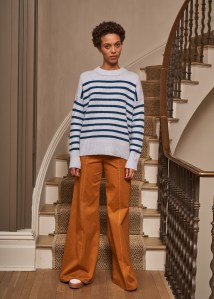 But even in good times, the business is difficult. They buy inventory and sell it direct, so they’re selling in smaller increments and getting their money back day to day. When they do sell wholesale, they have to wait 30, 60, 90, or now what stores are proposing, 120 days, after shipping the goods to get payment, said Howard. “It’s already a tough cash-flow business. Obviously right now, there are so many issues that exist to begin with.”

La Ligne manufactures its collections worldwide. Currently, merchandise isn’t being made in New York, and they’re producing in Portugal, Peru and China. When China shut down, the company moved things to Portugal and Italy, and when China opened back up, they could transfer pieces and bulk up production there. The brand ships out of its New Jersey warehouse.

“We’re very fortunate to be making a product that people want,” said Macaulay. “Our message has always been about clothes that you can eat, drink, dance, and sleep in, in the comfort of your home.” She agreed that customers were gravitating toward comfort pieces. “It’s a little less of the eccentric, novel pieces, and more toward the wool-cashmere, things you can wear at home or look good for your Zoom meeting,” said Macaulay.

To generate business, La Ligne has offered a site-wide 15 percent discount since the pandemic began in the U.S. It’s the first time in the history of the four-year-old  brand that they’ve done this. “We’ve always tried to educate our customers that there’s a built-in discount since we’re a direct-to-consumer brand. We only mark it down on Cyber Monday,” said Howard. She noted that customers are taking advantage of the opportunity to buy core pieces that they realize they’ll have for a long time. La Ligne is also giving 15 percent to a different charity each week, such as Baby 2 Baby and Robin Hood. They had their sewers make masks and gave out 500 free masks with a purchase within four days.

As far as business with their wholesale accounts, Howard said that as of Thursday, Net-a-porter in the U.S. and U.K. was still not active, and Nordstrom is moving product at 25 percent off on its site. Asked how she deals with that on her site, and whether she has to match the sale, Howard said nordstrom.com has a lot of exclusive product that La Ligne doesn’t sell on its site.

At present, Macaulay said they’re doing fittings for their winter collection and are starting to think about spring. Since they own their own inventory, some pieces that were scheduled to launch last week were pushed back a few weeks. For example, they feel the dresses, which were scheduled to sell now, will be better served if they launch in a few weeks or months from now. Howard said they don’t have to pay for inventory until they receive it.

“For us, we have to conserve as much cash as possible at the moment. For me, my number-one concern is cash conservation. We don’t know how long this will last, and we have to protect our ability to keep our employees employed, which means we need to have as much cash on hand as we can,” she said.

La Ligne has found that e-mails have worked the best in conversions. “Our e-mails have been our biggest conversion tool at the moment. For new customer acquisition, the sample sale was quite effective,” said Howard. The sample sale, which began March 26,  lasted for two weeks. The company offered 50 percent off on core pieces.

Because they drop new things every week, they’ve had to make some adjustments. While the company still receives new products each week, when the pandemic began in the U.S., they spoke to their factories and gave them an adjusted scheduled. “We said, ‘everything that you thought we wanted to receive April 1, we actually don’t want to receive until May 20.”’ The factories said it was fine with them, especially after what they’ve been though. The Italian factories wouldn’t be able to produce the inventory on time, either.

As for the Manhattan store, Howard isn’t sure when it will reopen. The spring merchandise is still in there. “We could take it out, but we wanted to keep New York looking like New York,” said Howard. She said she’s applied for every loan possible, and hasn’t received a small business loan yet.

Asked what precautions they’ll take once their 650-square-foot store reopens, Howard said they’ll adhere to what New York Gov. Mario Cuomo and the Centers for Disease Control and Prevention say in terms of masks and gloves. “It’s a small store. We’re going to have to take it day by day. Maybe we’ll only have a certain amount of people in the store at once and more social distancing.”