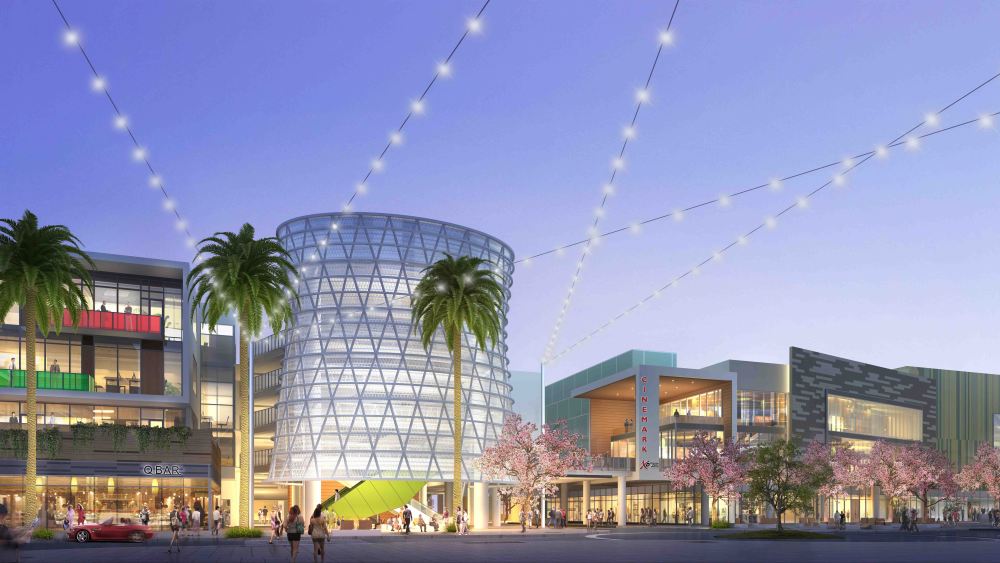 Los Angeles is fashioning a new retail landscape for itself.

Construction downtown has reached a frenzy as smaller hot spots emerge throughout Los Angeles county, leading to a revitalization of space for retailers large and small looking to share the spotlight currently shining on the L.A. apparel industry.

Nowhere is that more apparent than the city’s nearly six-square-mile downtown central business district, which includes the Arts and Financial Districts.

“We’re in the first inning of the game downtown, so it’s been amazing,” said Robert Cohen, vice chair of real estate firm RKF. “We’ve seen a great resurgence since the Great Recession all throughout the existing markets in L.A. The market’s definitely come back pretty strongly. But the biggest story, by far, has to be downtown L.A.”

More than 10,000 residential units and nearly 2 million square feet of retail are currently under construction. That includes The Ratkovich Co.’s mixed-use project The Bloc, anchored by a Macy’s flagship, in downtown’s Financial District and the At Mateo retail project from Blatteis & Schnur in the Arts District.

“All the development will lead to a demographic change in terms of the residents, in terms of the daytime traffic,” Cohen said. “It’s [driven by] the development. It’s the fact that you’re going to have new residential units coming online, catering to a middle- to upper-income consumer, and you’ve got all the adaptive reuse. The Broad Museum just opened. You’ve got sports with the Staples Center. There’s a resurgence of theaters on Broadway. Downtown L.A. is becoming a must-be place that you want to be a part of.”

It’s a transition that’s years in the making with the number of people living in downtown now at 57,000 from 18,000 in the early 2000s when new residential was infused into the city’s core.

“It’s a brand new story. It’s taken about 25 years to develop,” said Carol Schatz, president and ceo of the Los Angeles Downtown Center Business Improvement District. “It is a very important development in L.A. history to have our center come back. We haven’t seen a vibrant center in the city since the early 1940s and because we’re the second-largest city in the country, it’s big news.”

Downtown’s evolution is what prompted Wittmore to open an outpost in the Arts District at the One Santa Fe project, said founder Paul C. Witt.

“We were attracted to the Arts District after spending a year there working on other projects,” Witt said. “It feels like L.A.’s version of Brooklyn and you can really make a statement.”

Wittmore is in good company with nearby businesses such as Cafe Gratitude for healthy fare, interior design firm Hammer & Spear’s storefront, stationery and home store Poketo and home line Matteo.

APC is now in downtown and Australian label BNKR is set to open up shop there. Young e-tailers such as online boutique The Dreslyn made downtown its headquarters, as did Aella, a maker of tailored essential items.

“I think downtown L.A. is flourishing because retailers’ attentions are finally catching up to the people who have been working or living here,” said Aella founder Eunice Cho. “Before, downtown L.A. had a gritty reputation and was thought of as a place you go to for jobbers and fabric close-outs. The fashion industry has always been here, but with the increasing appeal of the Made Local and Made in L.A. [movements], people are realizing that it’s not unglamorous to be in downtown. In fact, it can help you tell an authentic story about your brand and company.”

Affordable rents can still to be found in downtown, Cho pointed out, and she’s located in a building where most of her suppliers and vendors also work.

And while activity in downtown is easy to notice, it’s not the county’s only retail market that’s popping. Rents have risen about 11 percent in the last three years, county-wide, but they are still much less expensive, on average, than downtown. According to CBRE, for L.A. County, the average asking lease rate for retail per square foot annually was $24.36 in the fourth-quarter of 2012 compared to $27.12 in third-quarter 2015.

Culver City is having its day with transit-oriented projects such as Access and Platform where the southeast corner of Washington and National boulevards are becoming major focal points. Platform has already inked deals with Velvet by Graham & Spencer, leather-goods brand Parabellum and one for the first West Coast outpost of Carven.

Venice, well known for Abbot Kinney Boulevard, is another hot spot. Rents on the famous thoroughfare are popping at anywhere from $13 to $18 per square foot and brokers aren’t seeing an end in sight to price hikes. That dynamic prompted a shift that began several years ago that has pushed out smaller mom-and-pop businesses in favor of national and international brands.

“I wouldn’t be surprised if Abbot Kinney turns into Robertson Boulevard, where you have the international and national fashion tenants paying these huge rents as a billboard and, in turn, you do get quite a bit of vacancy,” said Zachary Card, a senior retail associate at brokerage CBRE. “I don’t think we’re there quite yet, but I don’t see [the street] resetting and going back [to what it was].”

The shifting landscape on the ultracool street has paved the way for other nearby stretches to elbow their way in, such as Main Street and Lincoln Boulevard.

Australia-based luxury label Bassike opened its first U.S. store on Lincoln in September. The company’s cofounders shopped around West Hollywood, Melrose Place, Silver Lake, Brentwood and also downtown, but found the Venice environment to be more similar to Sydney and the best place to launch the brand.

“We’re very interested about what’s happening in L.A. There’s some great stuff happening downtown and very creative people moving into L.A,” said Deborah Sams, Bassike cofounder and co-creative director. “We did our research on the different areas of L.A. — there are so many pockets, and they are different culturally. We feel like Abbot Kinney has sort of been done now. It’s become very commercial. The rents are very high. It didn’t feel right for us. There’s some really exciting things happening around our store.” She was referring to neighbor Superba Food + Bread.

There’s also Christy Dawn, which opened its 800-square-foot store on Lincoln about four months ago.

The pop-up shops and artisan feel of the tenants that have located there is what wooed Christy Dawn Petersen to open the dress line’s first store there. The floor is stocked with Christy Dawn dresses — a favorite of Erin Wasson — along with vintage finds.

New can best describe what’s happening south of Venice, where a neighborhood is being created with the Runway at Playa Vista project. A decade ago new condos, catering to singles in their late 20s moved into a sleepy area that’s since evolved to earn the nickname Silicon Beach with major players such as Microsoft, YouTube and Google taking up space there. Jessica Alba’s The Honest Co. is set to relocate headquarters from Santa Monica to Playa Vista next year after inking an 83,000-square-foot lease deal there. And the young singles that had helped jump-start the area have since grown up to have kids, spurring the demand for office, residential and retail development. “They’re building a little city in Playa Vista,” CBRE’s Card said.

Work has just begun on filling out the rest of Runway’s 221,000 square feet of retail with non-chain fashion tenants such as surf-inspired retailer Barnabas Clothing Co.

Zach estimates tenants are now likely paying 25 percent more than retail tenants in that initial phase of development from a decade ago.

“Once all the new offices are completed and folks have moved in, [Playa Vista is] going to have a greater critical mass than Century City,” he said. “We’ll be over 10.5 million square feet of office. You’ll have over 60,000 employees. These are immense densities that have driven the need for retail and amenities.”