NEW YORK — Two significant developments are expected to impact the $250 million lingerie specialist Gruppo La Perla this year: It unveiled a multimillion dollar flagship and headquarters on Madison Avenue here last month, and the company is... 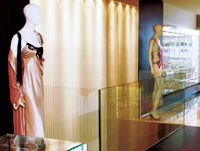 NEW YORK — Two significant developments are expected to impact the $250 million lingerie specialist Gruppo La Perla this year: It unveiled a multimillion dollar flagship and headquarters on Madison Avenue here last month, and the company is actively looking for a successor to Gianluca Flore, who resigned as chief executive officer of La Perla’s $23 million U.S. operation.

“We are continuing to look for a successor. It’s just a matter of time,” said Sarah Saatchi, director of La Perla’s retail division in the U.S.

Flore, who left La Perla Sept. 5, was tapped by Fendi North America as its new ceo last month, as reported.

Retail sales for the first full year at La Perla flagship are projected at $4 million, said Saatchi. She further noted that year-to-date business is up 25 percent, saying, “Lingerie and rtw are doing extremely well. We are also looking to expand our Beverly Hills store next year.”

The new ultramodern store is rendered in signature La Perla fashion — ivory marble floors, mahogany wall sections, mirrored ceiling insets and soft backlighting behind ivory-lacquered drawers that look like the periodic table of the elements. The beauty of the intimate environment is underscored by the luxury of space and the minimal amount of merchandise on the floors. However, the star attraction is an airy glass-encased skywalk on the second floor that bridges the Madison Avenue windows and swimwear area with the center and back of the huge room, where babywear is merchandised in display cases and a smattering of lingerie hangs on custom metal hangers that have a look of burnished pewter.

Designed by the Milan-based architectural firm Buratti & Battiston, the luxurious ambience extends to three fitting rooms on the main floor and two on the second level that feature facing full-length mirrors for an all-around view, amusing sparkly black paillette carpeting and luxe ivory silk robes for a customer to wear if she wants to come out and make another selection. And the mood of intimacy and modern elegance is captured with a soothing beat of music mixed by Anna Masotti, the company’s creative director and daughter of La Perla’s owner, chairman and ceo Alberto Masotti. Entitled “Private Show,” the cd sells for $25.

Buratti & Battiston has designed La Perla’s 63 freestanding boutiques worldwide, including shops in Chicago, Boston, Miami, Beverly Hills and South Coast Plaza in Costa Mesa, Calif. The exception is La Perla’s third unit in Manhattan, which was opened last March in the trendy Meatpacking District and was built by Enfield, Conn.-based architectural firm Permasteelisa and designed by Matteo Fregonese. The Chelsea unit is projected to generate retail sales of $500,000 the first year, while a second boutique here at Greene Street, opened in November 2002, reached its first-year sales projection of $1.5 million, said La Perla executives.

A party will inaugurate the U.S. flagship in November, and also will celebrate the 50th anniversary of Bologna, Italy-based Gruppo La Perla, said Saatchi. She added that Alberto and Anna Masotti are expected to attend.

Anna Masotti said a special La Perla Limited Edition collection for fall-winter 2004 will be showcased at the festivities. “It’s entirely dedicated to celebrating our 50th anniversary, and it consists of just a few garments made of the finest lace, recalling a design from our early archives. This collection will be sold exclusively in our boutiques and a few other upscale stores,” said Masotti.

Regarding best-selling items at the new flagship, Saatchi said the demand for thongs that retail as high as $175 or $1,000 silk nighties hasn’t waned. “Luxury thongs continue to be in big demand for us, and still are the number one selling item for us. A thong customer will always remain a thong customer.”