Following its acquisition from Pacific Global Management in 2013, the intimates brand is opening stores, redesigning existing spaces and expanding into new categories. 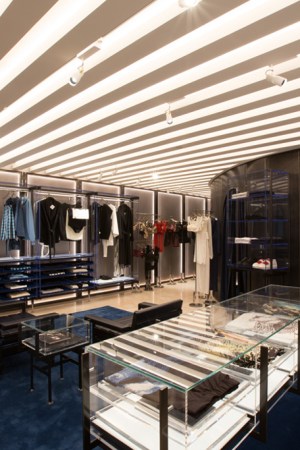 Off 5th Turns On Diversity and Inclusion Efforts

Designed by architect Roberto Baciocchi, who’s known for creating the Prada and Miu Miu stores, the space features a VIP area on the first floor where customers can try on the new atelier collection, which was presented during Paris Couture Week in January. A small assortment from the men’s collection, which launched last year, sits on the first floor, and a larger, more masculine space dedicated to men’s footwear, sleepwear and underwear is on the second floor. The men’s line includes underwear and T-shirts that retail from $43 to $180 along with pajamas and silk robes that range from $200 to $3,000. The swim collection is priced from $230 for a pair of swimming trunks to $1,500 for a silk jersey hoodie.

“The flow and integration of men’s is really to cue the client that men’s has a presence in the store,” said Suzy Biszantz, chief executive officer of La Perla North America.

Baciocchi looked to Italian architecture to elevate the 3,200-square-foot space. Arches made from marble act as entryways to different areas of the store, which is two floors with a dual-level opening near the entrance. A boudoir feel comes through with amethyst carpet, gold fixtures and plush seating. Fitting rooms mimic ancient confessional booths with a service bell and a microphone that customers can use for assistance.

This redesign is part of La Perla’s global expansion plan. The brand, which was purchased by Pacific Global Management in 2013, recently opened locations in Atlanta and San Francisco. By this summer, a new flagship also will open in Houston. The brand is moving its Chicago, Honolulu and Bal Harbour, Fla., stores into larger locations. It’s North American store count will be 14 by the end of the summer. Its other New York City locations in SoHo and TriBeCa will be updated next year.

Women’s sunglasses, a new category for the brand, will be in stores this July, and Biszantz said a women’s jewelry collection will be available later this year.

“In general we are really cautious about expanding and we are looking at cities where sometimes it makes more sense to expand in a successful location rather than looking at a brand new demographic or market that we’ve never been in. We are always assessing how we can extend our current retail portfolio,” Biszantz said.

Although wholesale is still a big part of its business, La Perla’s stores and e-commerce sales now account for 70 percent of sales in North America. According to Biszantz, revenue in North America increased by 24 percent in 2014.