By Samantha Conti and Luisa Zargani and Paulina Szmydke on March 11, 2013
View Slideshow 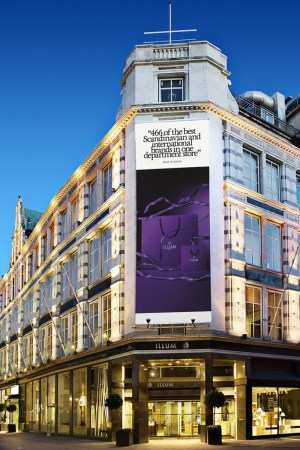 MILAN — Europe’s economy may be ho-hum, but its retail scene is brimming with activity.

This story first appeared in the March 11, 2013 issue of WWD. Subscribe Today.

On the heels of bids and counterbids launched to secure Printemps, Italy’s La Rinascente said Friday it was expanding beyond the country’s borders for the first time in 150 years through the acquisition of Copenhagen-based department store Illum. “We are expanding our format, not our brand,” said La Rinascente chief executive officer Alberto Baldan. “We will export our know-how to enhance the historical Illum brand. Our plan is to create a collection of luxury stores, not a chain.”

Baldan did not disclose financial details of the transaction, but La Rinascente will invest 50 million euros, or $65.5 million at current exchange, over the next five years to restructure the store, founded in 1891. Illum, which will maintain its name, is located in the most exclusive shopping area in the heart of Copenhagen, attracting 6.5 million visitors a year, said Baldan, pointing to the latter as one of the reasons behind La Rinascente’s choice of that store. The executive said there are plans for additional such ventures in the near future in other major capitals, but “each store must express the best and its distinctive character in its own context. La Rinascente will be a guarantee for quality and service.”

“This is a winning strategy. The department store format remains successful wherever there are managers capable of innovating and evolving it,” said Armando Branchini, deputy chairman of Milan-based InterCorporate consultancy. “It’s a great opportunity in Europe, which is a magnet for tourists, attracted by the beauty of the region’s countries and their upscale products.”

Retail analysts said La Rinascente’s move made sense on a variety of levels. “The department store format looks stronger now than it has for the past 20 years. It’s alive and well in a world where retail is still struggling,” said George Wallace, chief executive of MHE, the European retail consultancy. “Since the crash, the department store format has held up a lot better than other retail, where the bankruptcies have been with chains or specialty stores. The department store format as a ‘house of brands’ — with or without [private label] brands — has proven resilient.”

Wallace added that department store chains also tend to be in bigger towns and metropolitan centers, which are generally doing better than the provinces in terms of sales and footfall.

He described Illum as “the Harrods of Copenhagen,” located in “a beautiful building with two atria. It’s a lovely building in need of strategic merchandising. That a company like La Rinascente would buy it makes sense to me. Plus, Copenhagen gets a lot of international visitors.”

He added that going forward, any prestigious department store that has one-off features would be attractive, and named Vroom & Dreesmann in the Netherlands as a possible candidate. On the flip side, he said the smaller stores have everything to gain from having retail-focused owners. “The economics of a one-off store that does not have a million square feet of selling space like Harrods can be difficult because you need buyers for each department. If you are smallish, it’s hard to make money from that sort of formula,” said Wallace.

Nick Hood, head of external affairs at Company Watch, the London-based firm that analyzes the financial health of businesses, said there are a variety of factors at play with regard to retail acquisitions right now. “Struggling sectors attract canny bidders. And the perception right now is that there are opportunities out there and deals to be done because ‘you won’t see prices like this again.’ It’s the old Warren Buffett strategy.”

At the same time, he said, department stores are attractive prospects. “The U.K. department stores had a great Christmas. They are the shopping malls of town centers, and many of them use their space in an innovative way,” he said.

To wit, earlier this week the John Lewis Partnership, which owns the Waitrose, John Lewis and Peter Jones chains, handed each member of its full-time staff a record-breaking bonus of nine weeks’ pay, or an average of 4,000 pounds, or $6,000, a person. The store’s profits rose 16 percent in the 2012-13 fiscal year on the back of strong sales at all of the stores.

Hood said that department store management is as much a property play as a retail one. “The better your concessions do, the better you do. The rental base is turnover linked. And the market perception is that if you can run one department store well, you can run all of them well.” Of the stores that could make good candidates for a sale, he named the publicly quoted British chain Debenhams, which is carrying a high debt load and has more than 100 stores in the U.K. and abroad.

Also currently up for grabs is a 70 percent stake in French department store Printemps. Its owner, Deutsche Bank’s real estate asset management division, RREEF, which had planned to sell its stake by 2014 at the latest, has entered into exclusive negotiations with unidentified Qatari investors and the Borletti Group, run by former La Rinascente chairman Maurizio Borletti, which owns the other 30 percent and has a priority claim to the stake.

The battle heated up and spurred fierce reactions in the French media when Galeries Lafayette ceo Philippe Houzé said last month that he would “not throw in the towel.” Houzé’s previous offer to acquire RREEF’s stake for 1.8 billion euros, or $ 2.38 billion at current exchange, was rejected late last year.

In his latest counterbid, Houzé proposed to the Qataris “to join forces” in an attempt “to combine Qatar’s professionalism in real estate with our know-how of managing large stores,” as he declared.

Houzé is said to be thinking big. On his mind is a project that would turn the Boulevard Haussmann, home to both Printemps and Galeries Lafayette, into a “tourist zone,” allowing shops to stay open on Sundays.

But since the two department store chains — if combined —would create a retail powerhouse with annual sales of 6.5 billion euros, or $8.61 billion, it is unlikely that France’s competition authorities would accept such a monopoly position.

Printemps belonged previously to French conglomerate PPR, which sold the chain to RREEF and Borletti Group for $1.33 billion in 2006.

Covering more than 226,800 square feet, Illum targets the medium/high-end market and sells a selection of merchandise running from fashion and beauty to home and design by around 120 Scandinavian and international brands. “We share a similar story, this is a historical store in a superb location, and we will integrate the brand mix,” said Baldan, underscoring the significant growth potential. At the end of the restructuring, 400 jobs will be created, he said. La Rinascente closed 2012 with sales of 462 million euros, or $591.3 million at average exchange, up 6 percent compared with 2011. Illum has sales volumes of around 93 million euros, or $119 million.

La Rinascente’s goal is to capitalize on the value of the historic store by repositioning the brand through an upscale restructuring and restyling and upgrading the goods carried, similar to what the Italian store has been doing over the past few years. Chairman Sudhitham Chirathivat said that like La Rinascente, Illum “is another store with a strong tradition and excellent potential for growth.” The goal is to invest in Illum’s “infrastructure and in people to provide best products and services,” making it “the most prestigious department store” in Copenhagen.

The acquisition is in line with strategies mapped out by La Rinascente’s new owner, Thailand-based Central Retail Corp., which took control of the Italian department store chain in May 2011 with plans to expand globally. Established in 1947, CRC is a subsidiary of the Central Group of Companies, one of Thailand’s largest conglomerates with operations in restaurants, hospitality, real estate and retail. With sales of more than $4.5 billion, CRC’s main retail formats include department stores, supermarkets and specialty stores under the Central, Robinson, ZEN, La Rinascente, Food Hall, Tops, FamilyMart, Power Buy, B2S, Supersports, HomeWorks, OfficeMate and Thai Watsadu store brands. At the end of December last year, CRC operated a total of 1,404 stores worldwide.

La Rinascente is also investing 200 million euros, or $260.5 million at current exchange, in the restructuring of its unit in a building directly owned in Rome’s Via del Tritone and expected to open in the spring or summer of 2015. This year the Milan unit in Piazza Duomo, the chain’s jewel in the crown, will complete its renovation plan initiated in 2006.