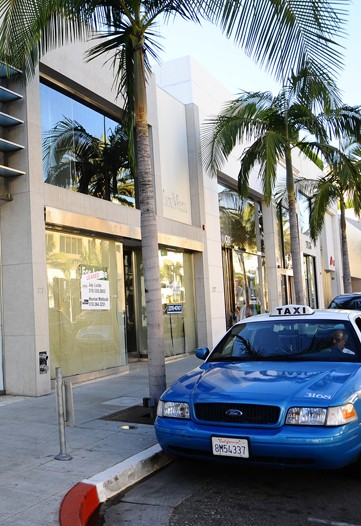 Lisa Kline, who has two namesake stores on Robertson Boulevard and one on South Beverly Drive in Beverly Hills, said she wants a retailer to take over the lease on her 2,500-square-foot Beverly Drive unit. Sergio Rossi has shuttered its Melrose Place outpost, opened just last spring as the Italian brand closes all its U.S. locations.

Rock & Republic doesn’t plan to occupy the 1,400-square-foot space on North Rodeo Drive in Beverly Hills that it leased for 10 years last spring and is trying to find a retailer to sublease the store, which it rented for about $50 a square foot, said Jay Luchs, an executive vice president with CB Richard Ellis real estate, who is handling the transaction.

Ron Herman, with stores on Melrose Avenue and in Malibu and Brentwood, is looking to sublease about 2,000 square feet of his estimated 5,000-square-foot store on North Beverly Drive, said Chuck Dembo, a commercial real estate broker involved in the sublease.

“I don’t think it will ever be like the good old days, when people were spending like crazy,” Kline said. “It’s ugly out there. There’s no fat on my company. My store is anorexic right now.”

From Rodeo Drive to Melrose Avenue to Robertson Boulevard, economic reality has rocked merchants on some of the Los Angeles region’s best-known shopping streets. The shutdown of boutiques such as the iconic Tracey Ross, which closed on New Year’s Eve after 18 years in business, is becoming commonplace.

“There’s a lot of [boutique] saturation out there — some people do it better than others,” Ross said. “When nobody’s been shopping for a while now, it becomes foolish to throw in more money.”

Larger chains also are falling victim to the recession, as consumer confidence and spending continue to plummet. Rents that had been rising in once sought-after retail districts here are declining.

Kira Plastinina quickly rolled out six Southern California stores last year, and just as quickly pulled the plug on most of the shops, after just seven months in business. The Russian teen designer’s namesake company filed for bankruptcy this month.

Monthly rents along Robertson Boulevard are said to have plummeted to $10 to $15 a square foot from $15 to $30 last year.

“The rents were outrageous, and they’re coming down as fast as they went up,” Kline said. “At those rates, you’re working for the landlord. The street just wasn’t that hot to pull those prices.”

Retailers are vacating spaces when their leases expire. Contemporary boutiques Madison and Diavolina, featuring accessories and shoes as well as apparel, are pulling up stakes on Robertson and moving to less expensive locations on nearby Third Street.

“It’s kind of like musical chairs with existing businesses,” Dembo said. “Not too many big deals are coming in from out of town lately — not the way there was before, when things were at their peak. It’s retrenchment time.”

“Now’s just not a good time…so the store isn’t going to do what we had thought it would for the next year or two,” Mente said, adding that it would account for 5 percent or less of overall business.

Retail vacancies are rising. As a result, tenants are renegotiating leases in the short term and asking landlords for concessions and amenities. The retail vacancy rate for neighborhood and community shopping centers here jumped to 8.8 percent from 3.2 percent from Dec. 31, 2007, to Sept. 30, according to a recent Colliers International report.

“In my 28 years in business, lease modifications have been pretty much out of the question,” said Fred Levine, who owns Southern California’s 10-store M. Fredric chain. “Now it’s common and landlords are expecting to hear from you. I’ve renegotiated all but one of mine. It’s encouraging as far as staying in business, because it becomes a partnership. We’re all facing the same enemy in the economy.”

The practice has clear benefits for both landlords and tenants.

“Once people leave, you’re stuck with a vacant space,” said Luchs of CB Richard Ellis real estate, who has brokered many leases on Robertson Boulevard and Rodeo Drive. “It’s much harder to get someone in once the space is empty. It’s better to renegotiate to keep the space occupied and some money coming in.”

Rent reductions aren’t the only way retailers are trying to slash overhead.

With budgets and inventories reduced to all-time lows, more merchants are starting to carry their merchandise on consignment.

Kitson, Belle Gray, Lisa Kline and others said they have dramatically increased the amount of consignment merchandise being stocked, a practice once limited largely to accessories and jewelry.

“My budget is so small that, if you want a significant presence in my store, you’re going to be on consignment,” Kline said. “Vendors have so much merchandise on their hands that it makes sense to put it in stores on consignment rather than have it sit in a warehouse.”

The California economy, equivalent to that of Italy, has been especially hard hit by the recession. The state’s unemployment rate of 8.4 percent in November was among the highest in the nation. Gov. Arnold Schwarzenegger has declared a fiscal emergency because of a budget crisis as the state faces a projected $40 billion deficit over the next 18 months. In fact, state government might run out of cash by Feb. 1. Already, the fiscal mess has forced a halt to construction of projects such as schools and roads.

And, for the fourth consecutive year, more residents left California — 135,173 — than moved there from other states, according to a December report by the California Department of Finance.

Despite the troubles, there is opportunity for stable retailers with cash on hand as lease rates drop.

Some Los Angeles-based merchants, such as Kitson, had embarked on expansion before the downturn struck, and do not plan to shutter units. Kitson owner Fraser Ross last month opened a two-story, 7,000-square-foot store on Melrose Avenue after launching a 15,000-square-foot location at the Americana at Brand shopping center in Glendale, Calif., in November. Kitson has six locations in Los Angeles County and a store in Dubai. Ross plans to open a unit this year in Malibu, Calif., and three more in Japan. Stores in Disneyland and Santa Monica Place mall are slated for next year.

“Landlords that have their buildings paid off, that’s where the deals are.…We’re looking for rent prices around the levels they were in 2000,” Ross said, noting that online sales now account for about 15 percent of his business, down from an estimated 20 percent earlier in the year. “Is it the best time to open? No, but we have to take the opportunities when we can.”