A steady stream of walk-ins wound their way into LACAUSA's new Silver Lake store earlier this week only to have owner Rebecca Grenell kindly tell them she's not yet open for business. 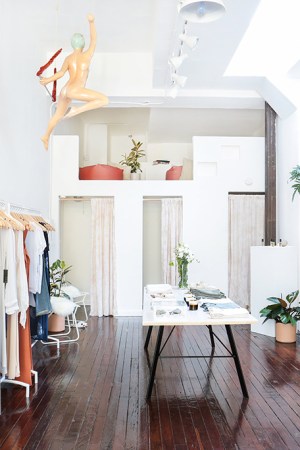 A steady stream of walk-ins wound their way into LACAUSA’s new Silver Lake store earlier this week only to have owner Rebecca Grenell kindly tell them she’s not yet open for business.

The unexpected foot traffic bodes well for Grenell’s new shop as she puts the finishing touches on the 900-square-foot space before it officially opens July 1. It’s the Los Angeles contemporary brand’s first foray into bricks-and-mortar as it prepares for an e-commerce launch this summer.

Grenell’s stocked her store with her brand LACAUSA, which is the abbreviated version of where the line’s clothes are made (Los Angeles, Calif.) and also reads “the cause” in Spanish. “Our wholesale business is pretty strong right now and [a store] seemed like a good evolution,” Grenell said.

LACAUSA is sold in more than 200 stores throughout the world, with the majority in the U.S., including Elyse Walker, American Rag, Anthropologie, Madison and Satine.

The company puts feminine spins on more boyish cuts. One of the pieces the line launched with in 2013 was inspired by an old T-shirt of Grenell’s father that she cut the armholes off of and wore for an entire summer. That style, redone in an airy chiffon and called Dad’s Shirt, remains one of her bestsellers. There’s also gauze jumpsuits, tencel utility jackets and lounge dresses. The line, at retail, ranges from $50 slips to $200 dresses.

The company’s main offices are in Vernon, Calif., where about 90 percent of the sewing is done. After two years, building up the wholesale channel, retail presents a new way of doing business for Grenell. “When you have a wholesale business, you’re in the factory. You’re a factory girl,” she said. “This is a very different thing.”

LACAUSA, the store, also features other brands. “They’re all just friends and friends of friends that wanted to be in the shop,” Grenell said.

Some of the other lines sold in her store include her brother’s apparel line Hero Crane, bag company VereVerto and jewelry and fragrances from Mondo Mondo along with some vintage pieces. There’s also hand-embroidered work from Grenell’s mother.