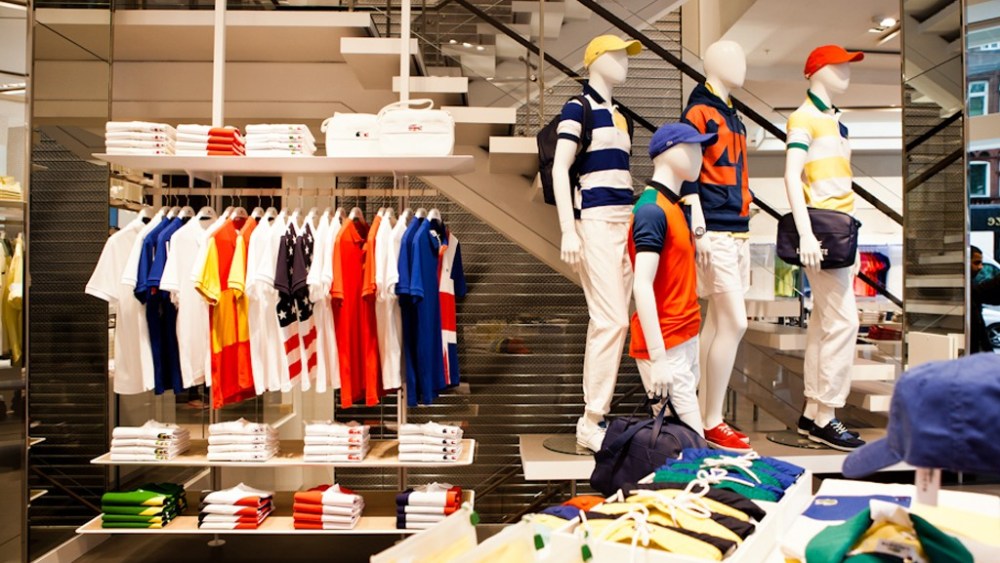 LONDON — Lacoste has unveiled its largest store globally on Brompton Road here, in time for the Summer Olympics. The new location stands near stores such as Burberry, Harrods and Topshop on the street.

The 6,458-square-foot unit made its debut last month, and carries all Lacoste’s collections, including its men’s and women’s line and the Lacoste Live contemporary collection, along with the label’s footwear, children’s wear, accessories and home textiles.

The sprawling store has been designed with distinct areas to house the different categories — on the store’s ground and first floors there are Polo Bars for men and women, devoted to showcasing the brand’s signature polo shirts in 65 colors, while a space on the first floor spotlights the Lacoste women’s runway collection, designed by the brand’s creative director, Felipe Oliveira Baptista. Lacoste Live is housed in the store’s basement, in a room whose wooden floors are painted to resemble a sports court. The store’s decor, designed by Lacoste’s design director Christophe Pillet, employs clean, angular white fittings, which contrast with details such as vintage Seventies Lacoste ads on the walls. There’s also an area on the ground floor dedicated to Lacoste Lab, a collection of sporting-inspired products created by the brand, such as bicycle helmets, cricket bats and skis.

Christophe Chenut, chief executive officer of Lacoste, said the store fits in with the strategy that the brand has developed with Devanlay, its apparel and accessories licensee, to open larger flagships that show off its new concept of segmenting the different collections. The label has recently opened or revamped its flagships in Paris, Hamburg, New York and Tokyo, with London the latest store to open. A store on Miami’s Lincoln Road will follow in September.

Chenut said the strategy has proved successful. “What we have done with the segmentation strategy is to enlarge the customer base,” said Chenut. “Through the segmentation we are more attractive to young people [and] women. And we are of course enlarging our customer base in the women’s segment thanks to the collection of Felipe [Oliveira Baptista] and all the new strategies we have set up to accompany this collection.”

Indeed, Chenut said that in the year to March 2012, Lacoste increased its turnover by 11 percent, and plans for growth of between 14 and 15 percent for the current fiscal year. “We are now in a very good period for the brand, which is more than compensating the difficult economic situation that we are facing worldwide,” said Chenut.

He noted that textiles, shoes, watches and eyewear are all growing strongly for Lacoste, and that the firm expects growth from the brand’s women’s collection and the Lacoste Live line. “Women’s [currently] only represents 20 percent of [Lacoste’s] sales worldwide, so that means we have room for growth with women,” said Chenut. He said that since Oliveira Baptista joined Lacoste in 2010, the brand is targeting “a more sophisticated woman.”

In terms of markets, Chenut said the U.S. continues to be “a major country” for Lacoste, which has 1,200 boutiques around the world, while China and Brazil “are moving very fast.” On a worldwide level, Chenut said Lacoste recorded retail sales of 3.7 billion euros, or $4.48 billion, for the 2011 fiscal year, and said the brand is on track to grow 13.5 percent to reach more than 4.2 billion euros, or $5.08 billion, for the current fiscal year.