Snoopy, Charlie Brown, Linus and Lucy are featured on clothing, such as pique polos and fleece sweatshirts for women, men and children. 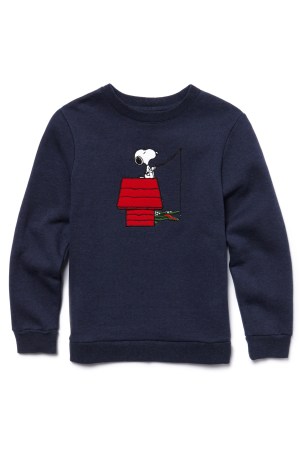 Lacoste’s latest collaboration is with the “Peanuts” cartoon gang. They have developed limited-edition apparel available at all Lacoste boutiques and its e-commerce site, beginning today.

Characters such as Snoopy, Charlie Brown, Linus and Lucy are featured on clothing, such as pique polos and fleece sweatshirts for women, men and children. Colors range from white, navy, gray and black, and retail prices go from $85 to $145.

The embroidered pieces include Snoopy crocodile fishing from his doghouse rooftop; Linus gently wrestling the reptile for his blanket; Lucy playing tennis with the crocodile, and Charlie Brown golfing with the crocodile seen popping out of the hole.

The characters, who are celebrating their 65th birthday this year, are featured in a new 3-D wide-release movie, “The Peanuts Movie,” via 20th Century Fox.