In an interview at New York headquarters at 551 Madison Avenue, Grünberg outlined several key steps she is taking to strengthen the Lacoste business in the U.S. and combat a highly promotional environment at retail. Among them:

• Cut more than 200 doors at wholesale where the presentation is small and isn’t meaningful.

• Close eight freestanding stores this year in its 100-unit fleet in the U.S to focus on larger format units. In the next three to five years, the brand will shutter a handful of smaller units a year.

• Invest in new stores, such as a 4,000-square-foot unit that will open at Westfield World Trade Center in New York in mid-August.

• Improve the brand’s consumer experience in its own retail stores, investing in personnel and sales training.

• Reinforce Lacoste’s strong tennis and golf heritage through partnerships and sponsorships such as The Miami Open Presented by Itau, which takes place March 21 through April 3.

• Strengthen relationships with golf and tennis clubs and resorts in four key regions in the U.S.: New York, Southern California, Texas and Florida. The first is a deal with Pebble Beach in California, where it will dress their pros, partner in their key events and sell the Lacoste brand there.

A graduate of ESSEC Business School, Grünberg began her career at Ernst & Young working in the luxury and distribution sector and rose to mission director. She has also held leadership positions at Deloitte, McKinsey & Co., Louis Pion Royal Quartz, and the Célio Group in Paris. She joined the Lacoste group in 2013 as managing director for France, and in July became ceo of Lacoste North America, succeeding Francis Pierrel, who held the job for two years and joined the Denim & Supply division at Ralph Lauren Corp. Grünberg reports to Didier Lalance, executive vice president of global markets at Lacoste.

Predominantly a men’s wear brand, Lacoste’s business is divided among retail and outlet stores; its digital flagship; its wholesale business, and golf and tennis specialty shops and country clubs. Men’s wear accounts for 95 percent of the wholesale business, and 80 percent of the merchandise in Lacoste stores. The only shop-in-shop it has for women’s is at Macy’s Herald Square. Grünberg said its golf and tennis business in specialty stores and country clubs is particularly strong, given the strength of the ath-leisure category. Asked if she has an interest in expanding the women’s business, she said she didn’t.

“We’re very strong in men’s wear. It’s a chance to be a men’s brand,” she explained. ” Very few brands are mainly focused on men’s. It’s better for us to be focused on strengthening our men’s brand and developing that part of the business, rather than trying to compete against three-fourths of the world [in women’s]. We all know it’s a very tough business.”

In women’s, she said, the company does well with products such as the women’s polo shirt and the women’s polo dress. “I don’t think going for fashion is good for us,” she said. Lacoste does show a lot of women’s fashion on the runway during New York Fashion Week, but those looks are available only at limited distribution. “We show more women’s on the runway because it’s fashion week for women’s and our designer [Felipe Oliveira Baptista] likes designing women’s clothes,” she said. “The runway is to elevate our brand. It’s sort of a laboratory of what we do. The [women’s] collection is sold in a couple of our stores, like Madison Avenue, Broadway in New York and Rodeo Drive. It’s more for communication and elevating the brand.”

Like most companies, Grunberg said the company is impacted by fluctuations in weather and tourism. “We’ve a very touristy brand. We’re such an international brand. We’ve developed the brand to be 90 percent international, and 10 percent French,” she said, noting that the brand is sold in more than 100 countries and is recognized globally. When fewer people come to the U.S. because of the strong dollar, it hurts the business in department stores and the Lacoste business, she said.

As for the closure of eight Lacoste boutiques around the country, she said the company thinks it has too many stores in America. “We want to be much more focused on the locations that are the most premium and the most impactful to the customer, and close the smaller ones,” she said. The company decided to close the smaller stores in certain cities while retaining the larger units there. “We want to make sure the visibility of the brand and the impact of the brand is significant. For that, it needs to be in bigger stores,” she said.

The company hasn’t permanently closed any stores in New York but its Madison Avenue store (at 55th Street) is currently closed for renovations and will reopen in May. “We’re going to invest more in New York,” she said.

Her main concern is to ensure the company is developing a healthy business over the next three to five years. “The trend that the market has taken, which is more volume, more promotion and more discounts, is not a trend that suits us. What we want to do now is grow in a more premium way,” she said. She added that the company continues to sell key accounts such as Macy’s, Nordstrom, Bloomingdale’s, Belk and Von Maur. Lacoste isn’t dropping any stores but is trying to determine which doors make sense and which don’t.

For the second year in a row, Lacoste is collaborating with J. Crew, where it sells its Lacoste polos for men’s, women’s and kids’ in J. Crew stores and the catalogue. Despite J. Crew’s struggles, she feels it’s a smart move. “Who’s not struggling right now? Everybody’s facing the same situation.” She said the collaboration is very balanced. “We’re very different from them,” she said, describing Lacoste’s sports and French DNA. “We’re very specific in what we do. They’re much more generalists. We bring them this elegant French sports touch. It’s a great chance to be a partner with a great brand such as J. Crew.”

The company also intends to “over-invest” in communication and sports marketing. For the second year, it is sponsoring the Miami Open, the two-week tournament that begins next Monday. “It’s a great tournament. For us it’s very important. South Florida is one of our key markets,” she said.  The Miami Open will feature such tennis players as Novak Djokovic, Andy Murray, Roger Federer, Rafael Nadal and Serena Williams. Lacoste will be selling a 2016 Miami Open collection that combines technical and lifestyle components for men, women and children. The collection includes polos, T-shirts, windbreaker jackets, shorts, tennis skirts, hat and handbags. Prices range from $35 for a kids’ tee shirt up to $165 for a duffel bag.

To help promote Lacoste’s involvement as an official sponsor and outfitter of the Open, the company is building a one-of-a-kind tennis court at the center of the Aventura Mall, where it has a store. Each day, different activities will be available, including tennis clinics, stroke development sessions, kids’ clinics, player signings and private VIP exclusive sessions.

Lacoste is seeking a strong partnership in golf for the U.S. market that it plans to reveal by the end of this year. “To be strong in the American market we need to [sponsor] American players,” she said. Asked if it’s risky for the company to sign an athlete given the troubles that athletes such as Maria Sharapova and Tiger Woods have gotten in, she said, “There’s always risks to it, but we have contracts so we’re protected. I think it’s important for a brand to have strong ties with people who are famous in a sport because people identify themselves to the player. When you have a brand like ours, it’s difficult to be legitimate with no well known player wearing your brand. We need a number-one player.”

Lacoste continues to be a sponsor of the French Open, “the most significant tournament that we have,” and sponsors many French and international tennis players. In addition to its impending deal with Pebble Beach, the company has identified 20 to 30 key locations in the U.S. for golf partnerships.

Meanwhile, their Web site remains the brand’s number-one store (accounting for 10 percent of the company’s retail sales), and Lacoste also has strong partnerships with Amazon and Zappos. But Grünberg feels that human relationships at retail are critical to the Lacoste business.

“We have a brand new training program going on. Those coming in the store are less than they used to be, so how do we deal with these guys? We’re happy to see them in-store, they’re not shopping on their sofas. How do we ensure that those customers who come into the store get the best experience? They buy because they’re treated and hosted in a way that makes the experience different. Digital is important, but we want to create a human experience,” she said. 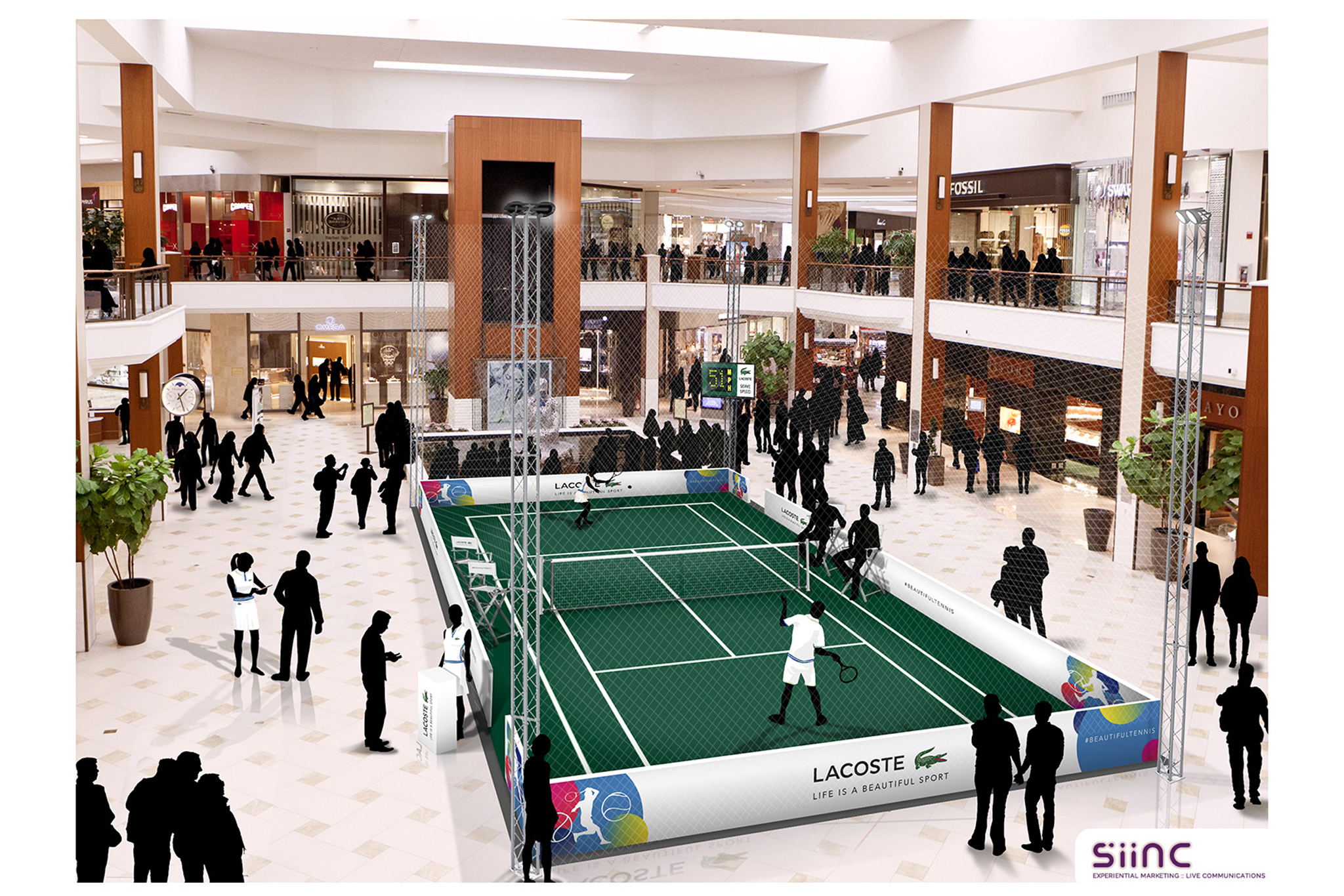 Lacoste rendering of tennis court at Aventura Mall in Miami.