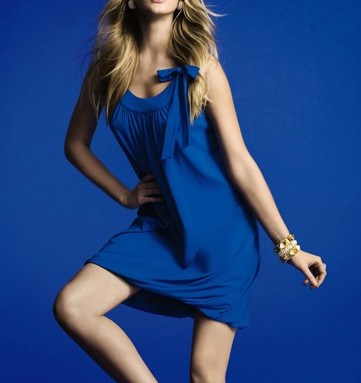 With its comprehensive reach from coast to coast, Macy’s can bring a designer touch to many places—including ones that some fashion brands wouldn’t be able to reach without the chain’s powerful wind under their wings.

While America’s largest department store chain hasn’t sold designer sportswear in more than a decade—the Little Shops department, which carried established designers as well as more experimental ones, shuttered in 1995—it nevertheless offers plenty of designer names through better-priced lines such as Lauren by Ralph Lauren, Michael Michael Kors, Calvin Klein and, starting this fall, DKNYC.

“It is not one of our biggest areas, but definitely one of our most important areas,” Denise Filchner, vice president of fashion merchandising for Macy’s Merchandising Group, says. “We feel that that business sets the tone, and many times, they are on the leading edge of the must- haves of the season that trickle down and become a massive thing.”

And that, she says, is just why “very fashion-savvy” shoppers come to Macy’s.

“She’s definitely up on the latest brands, and she is up on the latest trends faster and faster,” Filchner says. “We can say this on almost every level. She is looking for the latest silhouettes, colors, prints and fabrics.”

Unlike sibling retailer Bloomingdale’s, which has a floor dedicated to upscale designer lines, the Macy’s customer is looking to incorporate trends from the runway into her wardrobe, but at attainable prices.

After Macy’s integration of May Co. stores, which included transforming numerous venerable nameplates such as Marshall Field’s into Macy’s, the customer profile is probably more diverse than at any other store chain in America. That’s a boon to fashion companies looking to reach a wide audience. As one of New York’s must-see sights, the Herald Square flagship in particular benefits from a constant flurry of shoppers.

“There are few stores around the world like Herald Square,” John Idol, chief executive officer at Michael Kors Inc., says. “It’s truly a window onto the world. You have wealthy New Yorkers, tourists from the U.S. and tourists from around the world. I think Macy’s has also done a great job of building excitement. The energy is there, and if you put the right selling associates there, you can have a business that is probably second to none in the U.S.”

Elie Tahari, whose T Tahari line is sold exclusively at Macy’s, concurs. “With Macy’s, we can reach a huge audience,” he says. “The more people I can dress, the better. Terry Lundgren [Macy’s chairman, ceo and president] has been a fantastic partner.”

Other fashion executives agree, and reap the benefits from Macy’s wide reach, as well as its brand promotions. Last September, Macy’s held a weeklong event called “The World of Calvin Klein,” which, according to Tom Murry, Calvin Klein Inc.’s president and chief operating officer, lifted the Calvin Klein business to “a new level.”

“We have had a long and profi table partnership with Macy’s,” Murry recounts. “Terry and his team are aligned philosophically with our team as it relates to protection of our brand image and overall growth strategies. This connection has provided a platform for the Calvin Klein brand within Macy’s that has created steady growth through strong, as well as soft, business climates.”

Catering further to its aspirational customers, Macy’s lately has been aggressively courting designer exclusives. In addition to T Tahari, they include Tommy Hilfiger sportswear, which it is launching this month with a week of celebrations dedicated to the designer.

Macy’s also scored a major exclusive with the O Oscar line from Oscar de la Renta, though that line was shuttered after just three seasons.

Filchner observes, “Exclusives are more important now than ever before. It helps to differentiate our stores. It really gives us an edge. The customer is coming to us because she can’t get that anywhere else. And with speed-to-market being the name of the game, we can drive that with some of the exclusives partners.”

Filchner is all too aware of the power of the consolidated Macy’s brand—particularly when it comes to creating trends. “We can control our destiny to a very large degree,” she says. “It gets challenging to rely just on the market. Often we go into the market with whatever it is we are looking for— camouflage, for instance—and we don’t fi nd it, but [because of our strong relationships with vendors], we…can make camouflage happen. That’s one of the things that has come out of integration, and being one big brand: more synergy.”

When it comes to merchandising designer names, a seamless layout is key. “We are constantly evolving,” she says. “Gone are the days of those big designer shops with crazy fixturing. We are really looking at a seamless floor plan. The product stands on its own and delivers the individualistic appeal and the designer integrity.”

Counting 800-plus stores across America, Macy’s is careful to consider regional nuances through initiatives like the “My Macy’s” program.

“Across the country, especially with integration of the May Co. doors, we have found so many more opportunities out there,” Filchner says.

No matter what region, though, Filchner finds that the aspirational designer customer is strongly influenced by the celebrity scene. “[Celebrities] are really changing fashion,” she says. “Whether or not they come out with their own line is almost not important. What they wear is so important to fashion. We look very closely at them, whether it’s the cover of magazine, a new film or video or what they are wearing when they are caught in that [paparazzi] shot. Our customers come in right away wanting that look. They almost don’t care what the brand is, but it’s the look they’re after.”

While it is unlikely that Macy’s will bring back the luxury designer area in the near-term, growth is in the plan for the store’s fashion future.

“We have many doors that are growing and expanding from a customer profile basis,” Filchner reports. “There are younger customers coming into our doors. We are calling them ‘Millennium Girls.’ This customer is between 20 and 30, has her first real job, first apartment and disposable income. She is fashion-savvy, definitely an aspirational customer, and she is a new customer. She is shopping top to bottom. I think that is going to start to build our business in different ways— and it may affect our designer area.”