DALLAS — Natalie Chu invited 70 people to lunch at the Neiman Marcus flagship here, personally writing the invitations, planning the menu and helping to pick the fashions for a mini show.

Chu doesn’t work for Neiman’s and... 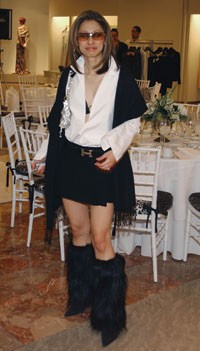 DALLAS — Natalie Chu invited 70 people to lunch at the Neiman Marcus flagship here, personally writing the invitations, planning the menu and helping to pick the fashions for a mini show.

Chu doesn’t work for Neiman’s and she’s not an event planner or fundraiser. Chu is a customer, and a good one.

The March event, paid for by the store, is part of a marketing strategy that is increasingly used by Neiman’s and a handful of other luxury retailers to lure shoppers, new and old.

Competition for high-spending customers is more intense than ever. Sales of luxury goods and services in the U.S. last year were valued at $525 billion, a 19 percent increase compared with 2003, according to a study by Boston Consulting Group. Apparel accounted for $30 billion, rising about 10 percent from the previous year.

“Neiman’s has really started asking people who have a variety of friends in the community to put their name on the top of the invitation and the return envelope,” said Ellie Francisco, a Houston socialite and event planner. “You get so many of these invitations from Neiman’s and Saks, and there is a tendency to toss them. But if there is a name over the Neiman Marcus, then you will look at the invitation.”

The idea of tapping into a customer’s sphere of influence dates back decades. Neiman’s has significantly increased the frequency of these events throughout the chain in the past 18 months to help keep it at the top of the luxury pack, store executives said.

Neiman Marcus Group posted double-digit gains in same-store sales for six consecutive quarters through January, though the trend slipped in February, with a 7.7 percent increase, followed by a 3.4 percent gain in March. Profit for the most recent quarter, ended Jan. 29, jumped 19.3 percent to $70.6 million, while revenues for the three months gained 7.7 percent to $1.13 billion.

At Neiman’s downtown Dallas flagship and headquarters, customer-hosted parties and other events targeting specific groups are held virtually on a daily basis during peak selling seasons.

“It’s constant,” said store manager Shelle Bagot, a Neiman’s vice president. “We’ve done them with anywhere from four people to 100 people, which is too many. The smaller ones work better.”

Saks Fifth Avenue uses the same tactic, though not as regularly.

“On special occasions, Saks Fifth Avenue does invite customers to cohost an event celebrating a particular designer or collection,” said Caroline Dougherty, vice president of special events. “In some cases, these events are held in conjunction with local charities and their key supporters. If a particular customer is passionate about fashion and has a strong affinity for a particular designer, it’s often the case that her close friends are like-minded. After all, shopping with good friends is a great American pastime.”

Neiman’s and Saks executives declined to discuss sales revenue that these events produce. But luxury competitor Stanley Korshak in Dallas generated $250,000 this spring from two dinner parties for 10 at the homes of customers, said the store’s owner, Crawford Brock. Spokesmen for Kiton and Belvest talked about their men’s clothing, while guests feasted on fish and pasta cooked by a chef flown in from Italy, Brock said.

“It was a very soft sell, one small pitch, and a lot of enthusiasm,” said Brock, who plans to build a private dining room in the store for such parties. “It has to be a more quiet type of environment.”

Tootsies, which has high-end stores in Houston, Dallas, Atlanta and San Antonio, organized its first customer-hosted luncheon on April 12 with designer Andrew Gn and has another planned in summer for Roberto Cavalli’s collection. Still, owner Mickey Rosmarin has mixed feelings about it.

“I think it’s too clever,” he said. “But I think it is using people a bit much….It is not the most honorable way to promote a product. But it’s a great way.”

Indeed, one Texas socialite is glad Neiman’s has not asked her to participate.

“I don’t want to be targeted,” said Roxanne Phillips, who lives in one of the largest estates in Dallas. “I probably wouldn’t do that to my friends. I would know what the game is.…The key is to get them in the store because when you’re dealing with a certain clientele, there is almost always something they could use.”

The exclusive nature of these parties might also be perceived as a snub to other customers.

“All customers should feel special, so we don’t do things just for a small group,” said a Barneys New York spokeswoman. “But we do have cocktail parties and events for different designers all the time….We don’t have customers host lunches for us.”

Chu, however, said she was flattered by Neiman’s invitation. “I thought, ‘Why me, little old me?’” she said. “Everybody has asked me, ‘How much do you spend there?’” She politely declined to reveal the figure.

Like Chu, a fixture on local society pages who gleefully calls shopping her “sport,” most people who are asked to lend their name and guest list to a Neiman’s event are well-heeled shoppers recommended by sales associates. The store’s public relations staff works out the arrangements, including presenting the invitation for approval. Most hosts don’t get involved in the details as did Chu, who wanted to stamp her style on the event.

Sometimes the host invites a specific group, organization or charity. Heidi Dillon, a guest at Chu’s luncheon who began shopping directly after the chocolate cake dessert, said she soon would be the host of a Chanel luncheon for fashion fans of the Dallas Historical Society.

“It’s a damn good idea to grow the customer base,” said Keith Nix, a former Neiman’s public relations executive who has operated his own agency since 1986. At Neiman’s request, Nix supplied the flagship with a guest list for a cocktail party in the men’s department in March.

“I sent them a long list, and they called me back and told me they only wanted gay men,” Nix recalled. “So I crossed some names off and sent it back to them.”

Though his name wasn’t on the invitation, Nix called several people to ensure they received it, and the party drew about 150 people.

Some said they felt obligated to buy something when invited to a store by a friend, while others shopped simply because they were there.

“If you go down there for a fun thing, I’m sure you’re going to leave with a Neiman’s shopping bag,” said Dallas socialite Angie Barrett. She picked up two pairs of Christian Louboutin shoes — prices range from $495 to $2,100 —  at a Neiman’s lunch at which her friend, Patty Crews, was the host.

At Chu’s luncheon, which drew about 40 people, the women chatted about their favorites in the fashion presentation that was staged while they sipped pink champagne and dined on lobster salad. Goody bags stocked with Frédéric Fekkai full-size shampoo and conditioner were tucked beneath each chair.

Chu dreamed up the theme of a trip to the Cannes Film Festival, so models paraded fashions for travel, the beach, dining and parties. As the models sashayed among the tables, two Neiman’s couture and visual display managers described each ensemble in detail. Stacks of Prada and Gucci luggage formed a backdrop.

Chu epitomized mixing by wearing a Jil Sander white shirt over a Target black bikini top, a black miniskirt she found in Australia, Hermès belt and furry Jimmy Choo boots. She threaded a diamond necklace through the chain strap of her silver vinyl handbag from Target.

A $1,640 coral sequined halter top by Roberto Cavalli piqued the interest of Shannon Davis, who sat at Chu’s table. “I have five children, so I don’t have a lot of time to drive around shopping,” she explained. “I’ll shop because I’m here. Otherwise I’ll go online and order what I need.”

Customers aren’t the only ones who are hosts at festivities with a sales overtone. Neiman’s is nudging its employees to stage small store parties for clients.

“We are doing more trend presentations, like a spring cocktail thing for 20 clients on a Thursday evening with drinks and bites and a couple models,” said a sales associate, who asked to remain anonymous. “I’ve done great business with it. We are encouraged to do it.”